Rajesh is a happy go lucky young man, and as an incorrigible optimist, his motto is : “Those who always cry get only tears and those who always laugh get the joys from Almighty.”

In another part of Calcutta, Roopa lives with her uncle. To celebrate Roopa’s success in B. A. final, her friends have arranged a picnic. But Roopa’s uncle has invited Shyambabu for tea on the same day and Roopa’s presence is essential because Shyambabu is coming to have a look at Roopa as a prospective bride for himself. Roopa gets very angry at this yet she has to obey her uncle her uncle’s desire.

But as a revenge she decides to make a fool to Shyambaby with the help of her geil friends and accordingly disguises herself as an old lady and waits for Shyambaby. But Shyambabu gets held up and sends Rajesh with a note of apology.

When Rajesh comes to Roopa’s house, Roopa mistakes him for Shyambabu and tries to make a fool of him, posing as Roopa’s grandmother- Rajesh discovers the mischief and instead of giving Shyambabu’s message, plays along till Roopa’s disguise is exposed and Roopa meets him as Roopa and invites him to the picnic.

Rajesh’s sister Chanda gets engaged to Rajesh’s childhood friend Ramesh. Rajesh goes to a gambling den to win some money for Chanda’s wedding but Rajesh, who always used to win for others looses when he gambles for himself. The owner of the gambling den –Moti invites Rajesh to his private room and offers him forty thousand rupees for the wedding, on condition that Rajesh should go to Darjeeling and shpuld pose as the long lost nephew of Raja Dinanath, Moti’s muti millionaire uncle, who is on the sick-bed.

Rajesh agrees and soon after the wedding of his sister, goes to Drajeeling and having been properly tutored and informed by Moti, succeds in convincing Raja Dinanath that he is really his long lost nephew Moti alias Ravi.

Roopa also has come come back to Darjeeling to her parents. On her birthday, Roopa’s father Mr. Sharma introduces Rajesh to Roopa and thus Rajesh and Roopa meet again in Darjeeling after the intial teasing they seriously fall in love with each other.

Roopa’s parents are happy at the prospects of her daughter being married to the nephew and heir of Raja Dinanath. But Rajesh decides to tell the truth to Roopa and her parents since true love does not admit any kind of bluff or cheating. But before Rajesh could put his decision into practice, Motilal is murdered in Calcutta.

And as Rajesh goes to tell the truth about himself to Raja Dinanath, he finds him dead. But strange enough this dead Raja Dinanath is not the same person whom Rajesh used to meet but Shyambabu, who has come with the police, claims the dead body as that of real Raja Dinanath. And also claims thast he is nephew of Dinanath. Rajesh smells a rat and escapes through a glass panel since his only hope is to find the truth on his own and save himself from being hanged for murder.

But every person whom Rajesh follows with the hope of unraveling the mystery is murdered mysteriously.

Roopas parents agree to marry Roopa to Shyambabu. Shyambabu and Roopa are enaged. On their engagement ceremony Rajesh comes in disguised as a Qawal and received a mysterious ring from Roopa.

But on the way he learns that Roopa has been kidnapped. Rajesh rushes to the secret cave and rescue Roopa, but as Rajesh and Roopa are about to leave the cave,  an ugly faced man bars their way to Dinanath wealth. And now he will not let success slip through his fingers. He demands the “will” as a price for Rajesh life. Roopa takes the “will” from rajesh and gives it to the ugly stranger who burns it in the fire . But Rajesh has already learned the truth through the “will” so he ultimately succeeds in getting the murderer arrested with all the proofs.

And Rajesh’s mother brings Roopa home as her daughter-in-law. 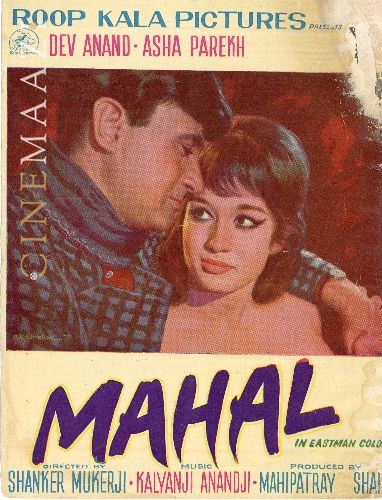