Good and evil, like day and night have been in man since the beginning of his being. All conceivable atrocities have been let loose by man over man. No religious order, no political system, nor any form of Government has been able to find a solution for this growing menace-the inherent evil in man.

Amidst such a state of affairs emerges, Dr Wilson, our hero. A noble soul. An eminent doctor, loved and respected by almost every person in the township of Panjim, Goa. Wilson, who is also a scientist, has been dedicating years to the study of the human-psyche. And he is convinced that, almost within his reach, he has the panacea for the problems of humanity. To this end, he has perfected a theory that man-every man-is not, in fact, one but two-the Good and evil, so intricately chained to one another.

He is on the threshold of a unique scientific discovery, whereby he will be able, through the administration of certain chemicals, to separate the two-the good from the evil. And once this is achieved, he believes, the evil can be lifted and thrown out.

No one gives credence to his fanatic theory though. Not even his friend, David, who suspects the man has gone crazy and the kind and benevolent parish priest, whose esteem for him changes into a kind of sudden fear. For Peter, Wilson’s man-Friday, however, the fear is that of hell. “Research-my foot!”

Diana, Wilson’s beloved fiancée. She is like his soul, his conscience. But between his research and his service towards the poor, Wilson finds little time to be with her, though Diana is one person he needs most. But for her impossible father-the retired military man, a diehard aristocrat with his daughter. The result is a cold war between the two men.

Then comes the astounding discovery which Dr. Wilson was after and which now transforms him into his other self! Dr. Wilson vanishes and into his shoes steps Black Stone. The change is stunning. The new entity, as Wilson expected is ugly, vicious and enormously powerful!

The phase that follows assumes the form of a ‘snake pit’ within whose spell everyone is irresistibly drawn. His entry into a night club and his unique style of possessing the charming, coquettish dancer, Daisy by brute force. The atrocious treatment he metes out to those who attempt to resist him. And things in that order.

But that’s where fate intervenes. Wilson suddenly finds himself unable to lose. And it’s not only poor Daisy but his dear friend Cardos, the blind man and his innocent kid sister, Martha, who are unwittingly drawn into the vortex of the hideous, ruthless powers of Blackstone…

He wants to confide in his friends, David and Sinha. But Blackstone’s uncanny powers overtake him.

For once Wilson’s fears become identical with those of the Priest. Is he treading a dangerous path? Has he a mere human, transgressed into the domain of God? Has he? 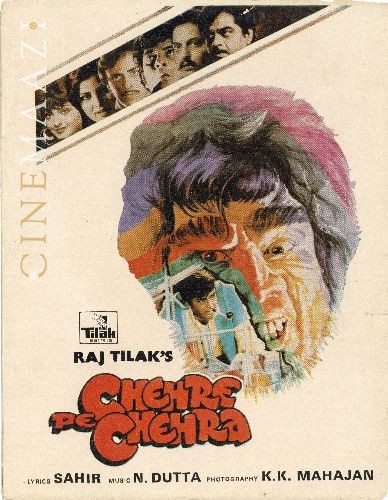