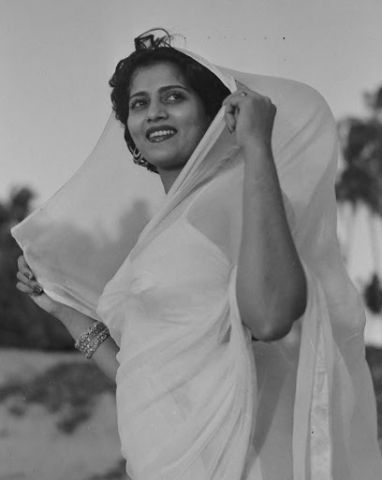 Born Mona Blasia Cabral on 3 February, 1929 in Goa, she was the eldest of two sisters and three brothers. Her father had a job in Sri Lanka; however, in the second half of the 1930s he returned to Goa. Bagging a job with Hindustan Construction Company as a cashier, he came to Bombay with his wife and children. Studying in Bombay and later at boarding school in Pune, her inborn talent for performing first came to the fore on the Konkani stage. Schooling at Victoria school in Bombay, she and her sister Ophelia would regularly perform at school annual gatherings. As they grew in confidence on stage, budding tiatr (musical theatre of Goa) writer A F Rodrigues offered the sisters the opportunity to act in his play Opurbaechi Sun. Both girls went on to enthrall the audience with their performance.

Mohana’s performance was noticed by thespian, C Alvares. A leading writer-director of the time, he was on the lookout for an actress for his Kortub Avoichem. Released in the year 1948, Mohana featured in this play; the only woman in this show amongst an all-male cast. Her performance won her a standing ovation; she would go on to act for C Alvares in plays such as Avoicho Xirap, Bail de Tarvotti, Bhorvanso, and Ankvar Kazari, among others.

She performed alongside the leading artistes of the times, such as Souza Ferrao, Anthony Mendes, Alfred Rose, Master Vaz, and Remmie Colaco. Her performances would draw audiences from across the city, who would come to watch the young beauty with the sweet and gentle voice, perform, thus also giving tiatr a considerable boost.

Rendering memorable duets with C Alvares, Star of Arossim, and others, these numbers were recorded by HMV, and would be played over All India Radio, Panaji.

Working as a telephone operator with a telephone company, was to lead to her bagging her first film offer. Her job of connecting the long distance telephone calls led to her interacting with prominent personalities of the time, including film personalities. She thus struck up a good friendship with Begum Para, Nargis and filmmaker Protima Dasgupta. Bagging her break with Kishore Sahu’s Sawan Aya Re (1949), she established a new identity as a film actress, her name – Mona also being changed for the screen to Mohana. She had earlier made an appearance onscreen with actor Vishwa Mehra in the song Raat ko ji chamke tare from the RK Films banner’s Aag (1948). Her name, however, did not feature in the credits.

With film offers coming her way, she went on to act in approximately 20 Hindi films including Char Din, Kamal, Patanga (all 1949), Chham Chhama Chham, Nazaria, Saqi and Saloni (all 1952), Shole (1953), Danka, Dost and Shart (1954), Insaniyat, Marine Drive, Sau Ka Note, Teerandaz (all 1955), and Suvarna Sundari and Baaghi Sipahi (1958). She essayed comic as well as negative roles, also making her mark with her dances to many hit numbers. She proved to be equally at ease on the screen as she was on stage.

On the personal front, she had married Britisher Edward Dawning, a Royal Air Force pilot, in 1951. The couple had a son, Mark. Edward tragically passed away in a plane crash in Calcutta after one and a half year of their marriage. She later married John Defrates and moved to Beirut with him. There, she began producing dance programmes for television. She apparently learned Arabic and acted in some Arabic plays and TV shows of Beirut. Later, after the couple settled in France, Mohana took keen interest in the Konkani programmes whenever these were staged. In 1983, when in India on a holiday, she acted in her brother-in-law Bab Peter’s drama titled Aiz Nam Faleam, which was staged in Bombay and Goa. It would be the last time the talented actress appeared before her fans.

Mohana passed away in France on 11 September, 1990. In 2015, a Konkani musical show was staged on her 86th birth anniversary, as a tribute to the late actress.