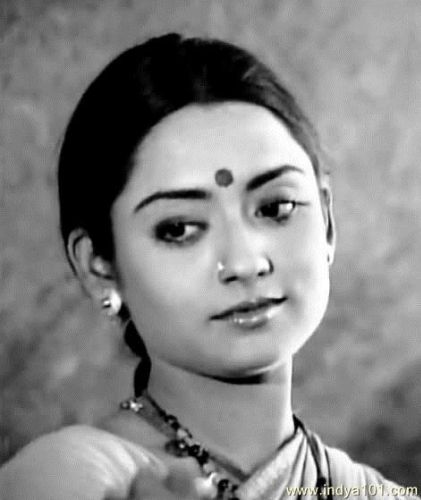 Known for her beautiful eyes, simple manner, and realistic acting, Talluri Rameshwari, better known as Rameshwari, won hearts in her debut film, Rajshri's Dulhan Wahi Jo Piya Man Bhaye (1977), which was a thumping success. Among her well-known films are Seetamalakshmi (Telugu, 1978) for which she received the Nandi Award for Best actress, Sunayana (1979) opposite Naseeruddin Shah, Mera Rakshak (1978) with Mithun, and Sharda (1981) and Aasha (1980) with Jeetendra, for which she also bagged a Filmfare Nomination for Best Supporting Actress. Also acting in Odia and Malayalam films, she produced a Hindi film with her husband Deepak Seth, titled Hum Farishte Nahin (1988) and a Punjabi film Mein Tuun Assin Tussin (2007). Her work in television includes serials such as Kairi, Babul Ka Aangann Chootey Na, Padosi, and Nanhi Si Kali Meri Laadli. She has also appeared in character roles in films such as Bunty Aur Babli (2005), F.A.L.T.U. (2011) and Rowdy Fellow (2014).

Born on 6 January, 1958, the younger of two sisters, she spent her childhood in Kakinada, Andhra Pradesh. Fond of films, it was only when she happened to watch a film shoot once that she fell in love with the whole process of acting. Bagging a seat in an acting course at the Film and Television Institute of India, she went on to discover the brilliance of world cinema. Graduating from FTII in 1975, she landed her first film, a Kannada movie called Kanakambari, in which she played the role of a mentally-challenged girl. While it was a good experience for her as an actress, the film was not released commercially. It was her Hindi film debut, Rajshri's Dulhan Wahi Jo Piya Man Bhaye (1977), that made her a household name. There is an interesting anecdote behind her signing the film. At FTII, Rameshwari along with her batchmates had watched a German film called O Jonathan, and found it very entertaining. After watching the film, she announced to her friends that she would act in a remake of the film, whenever it was made in India. Much later, she came to know that Rajshri Productions was going to make this film and that that it was going to be directed by the famous director, Lekh Tandon. After seeing her FTII diploma films, the production house got in touch with her and told her that they wanted her to do the film with them, but first, they wanted to see how she looked with makeup on. A screen test was arranged at Mehboob Studios and she was chosen. The film was released without any publicity, yet it quickly found favour with audiences with its wholesome and entertaining content. Amidst a glut of heavy action films, Dulhan Wahi Jo Piya Man Bhaye was a breezy, feel good film, which became a blockbuster in those days.

Rameshwari went on to play the title role in K. Vishwanath's Telugu film Seetamalakshmi (1978). Her performance in the film won her the Nandi Award for Best actress. Besides notable films such as Sunayana, Mera Rakshak, Aasha and Sharda, she also acted in Saajan Mere Main Saajan Ki (1980), Agni Pareeksha (1981), Aadat Se Majboor (1982), Waqt Waqt Ki Baat (1982), and Maan Maryada (1984) among others. Besides Hindi cinema, she also acted in films in other languages such as the Malayalam film Onathumbikkoroonjaal (1985), the Telugu films Chinnodu Peddodu (1988) and Nijam (2003), and the Odia films Manini (1985), and Bhuli Huena (1987). Taking a sabbatical from acting to raise her children post-marriage, she returned to play mature roles.

Along with her husband, who was her FTII classmate, Punjabi actor Deepak Seth, Rameshwari produced Hum Farishte Nahin (1988) with friends Raj Babbar, Om Puri and Smita Patil, with screenplay by Anees Bazmi. The film opened with 88 percent collections in spite of competition at the box office from the Amitabh Bachchan-starrer Shahenshah (1988). They also produced another film in Punjabi titled Main Tu Assi Tussi (2006) for which Rameshwari also wrote the story, which was based on the Shakespearean play A Comedy of Errors.