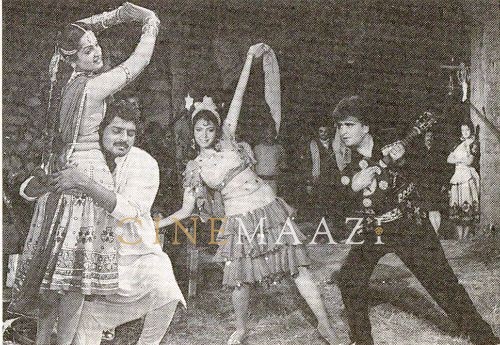 Actor and director Tariq Shah is known for films such as Janam Kundli (1995), Kadwa Sach (1980) and Mahaanta: The Film (1997). He is sometimes confused with actor Tariq of Hum Kisi Se Kum Nahin (1977), and also with Pakistani actor Tariq Shah. Tall and broad-shouldered, he was a rare Kashmiri Muslim actor in the Hindi film industry. Acting in supporting roles in more than 20 films, his releases include Bahaar Aane Tak (1990), Gumnaam Hai Koi (1983) and Mumbai Central (2016). He is also credited with directing the films Bahaar Aane Tak (1990), and Janam Kundli (1995) starring Vinod Khanna, Jeetendra, Reena Roy and Anupam Kher, as well as the TV show Kadwa Sach, which he also produced. The serial ran from 1980 to 1981 and had A. K. Hangal, Shoma Anand, Satish Kaul and Anu Dhawan in its cast.

Hailing from Nishat in Kashmir, he was a versatile actor, and used to perform on stage as well as on radio and television. He would appear on Doordarshan Kendra Srinagar, formerly known as Srinagar Television. He had moved to Mumbai approximately 40 years ago, to join the film industry and became fairly popular.

Said to be a discovery of Dilip Kumar, he was a big fan of the famed thespian and was said to be very close to him, also accompanying the veteran actor to film festivals. He was once praised in an interview by the legendary actor, who had spoken highly of him.

He acted in the 1980 Rajendra Singh ‘Atish’ directorial Dilwale Dulhaniya Le Jayenge in which he featured alongside Beena Banerjee and Desh Gautam. The romance genre film was said to be inspired by the Hollywood hit Fiddler On The Roof (1971). He played a character named Salim in Lal Chunariyaa (1983) which was directed by Sudarshan Lal and featured Minaxi Anand, Mithun Chakraborty and Dulari. In the drama Anokha Chamatkar (1988), directed by Krishan Malik, he featured along with Birbal, Sudhir Dalvi and Dinesh Hingoo, while in the Romi Behl directorial Insaaf Ka Khoon (1991), he was part of the cast comprising Shoma Anand, Prem Chopra and Deepak Ghatak. Among his last appearances on screen, he played Tailor Master in the film Mumbai Central (2016). Directed by Karan Radhakrishna, the film’s cast comprised Chetanya Adib, Jhuma Biswas, Abigail Blackburn, and Rajshri Deshpande.

His directorial Bahaar Aane Tak was a family drama produced by Gulshan Kumar. It revolved around a man who coincidentally marries a woman who was once raped by his close friend. It stars Roopa Ganguly, Moon Moon Sen, Sumeet Saigal, Tariq Shah, Shammi, Ram Mohan and Navin Nischol, with music composed by Rajesh Roshan. While the film was not a huge success at the box office, its songs became very popular, particularly the number Kali teri choati hai which became a rage among youngsters in the 1990s, with boys crooning it on campuses and girls during pre-wedding celebrations.

Uma Productions’ Janam Kundli, the 1995 Hindi-language action-drama film which he directed, starred Jeetendra, Vinod Khanna, Reena Roy, Anu Agarwal in the pivotal roles with music composed by Anand–Milind. It revolved around the story of Mahendra Prasad (Anupam Kher), who lives a very wealthy lifestyle along with his daughter, Kiran (Anu Agarwal), in a palatial house. He is very religious and superstitious and consults his astrologer, Pandit Din Dayal Shastri, on all major issues. When Kiran informs her father that she and Randhir Mehra (Vinod Khanna) are in love with each other, he consults Pandit Din Dayal (Anant Mahadevan), who predicts that the alliance is unsuitable. Mahendra convinces Kiran to marry the wealthy Ravi Kapoor (Jeetendra), which she does. On the day of the marriage, Randhir attempts to speak with Kiran, but is prevented from doing so. A scuffle ensues, the police arrive, and Randhir ends up shooting a police inspector, as a result, he is arrested, tried in court, and sentenced to two years in jail. Kiran gives birth to a baby boy, Sunny (Harish), who grows up and falls in love with Madhu Sodhi (Sakshi Sivanand). When they approach her father, Rajiv, to get the two married, Rajiv initially refuses but changes his mind when he sees Mahendra's photograph. A chain of events unfold as the dreaded prediction of Din Dayal comes true – that of death of Sunny at the hands of his biological father.

Tariq Shah passed away on 3 April, 2021 in Mumbai. He was survived by his wife, actress Shoma Anand and daughter Sarah. A shy person by nature, he was known to be a polished actor, noble human being and a sincere friend.