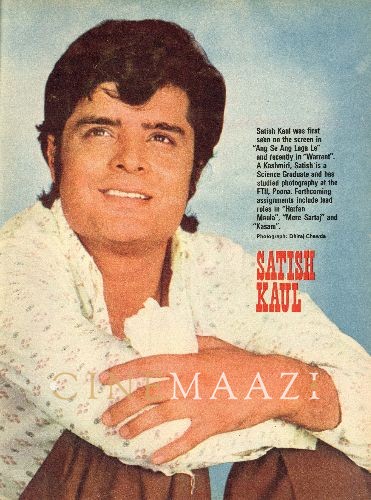 Veteran character actor Satish Kaul has approximately 300 Punjabi and Hindi films to his credit. He became a household name after playing the role of Lord Indra in the TV show Mahabharat. Among the films he featured in are Janam Janam (1988), Sheetla Mata (1981), Karma (1986), Pyaar To Hona Hi Tha (1998), Aunty No 1 (1998), Zanjeer (1973), Yaraana (1981), and Ram Lakhan (1989). He also acted in the TV serials Vikram Aur Betaal, Circus and Manoranjan. He was honoured with the Lifetime Achievement Award at PTC Punjabi Film Awards in 2011.

Born on 8 September, 1946 in Srinagar, the family later moved from Kashmir to Delhi. His father, Mohan Lal Aima, was a composer and television director with Doordarshan, while his uncle Omkar Nath Aima was a film actor; both promoted Kashmiri music and culture through their works.

Drawn to acting, he graduate from FTII, Pune. He featured in films such as Prem Pujari (1970), playing a soldier, for which he isn’t credited. He was first noticed in Ved Rahi's Prem Parbat (1973). He essayed the romantic lead opposite Rehana Sultan. The film told the story of an orphan girl, whose loyalties are divided between her aged husband and a young forest officer whom she has fallen in love with.

He essayed the role of Nutan and Dilip Kumar’s son in Subhash Ghai’s Karma (1986) and also partly sang the song Dil diya hai jaan bhi denge ae watan tere liye. In B Subhash’s Dance Dance (1987) he can be seen playing the synthesiser in the song Mera dil gaye ja zubi zubi zubi, and was also seen lip-syncing to the title track of Commando (1988).

He was also known for playing Lord Indra in the 1988 epic TV series Mahabharat, for which he was selected by veteran actor Gufi Paintal, who was also the casting director and production designer of the series.

In 2011, Kaul shifted to Ludhiana to start an acting school. However, the project ran into losses leaving him in dire straits financially. He had later opened up about his financial issues, following which the Punjab government granted him Rs.5 lakh aid. Bedridden for two and a half years following a hip fracture in 2015, he later moved into an old age home, followed by a rented accommodation.

A year after his marriage, he had separated from his wife who moved abroad with their son.

Satish Kaul passed away in Ludhiana on 10 April, 2021 following Covid complications. He was 76.

In a condolence message, Punjab Chief Minister Capt Amarinder Singh described Kaul as a versatile actor, who played a pivotal role in the promotion of Punjabi cinema, art and culture. In a statement, he said, “Being a staunch votary of Punjab, Punjabi and Punjabiyat, Satish Kaul would be ever remembered by one and all for his enormous contribution for making Punjabi cinema popular amongst the people.”