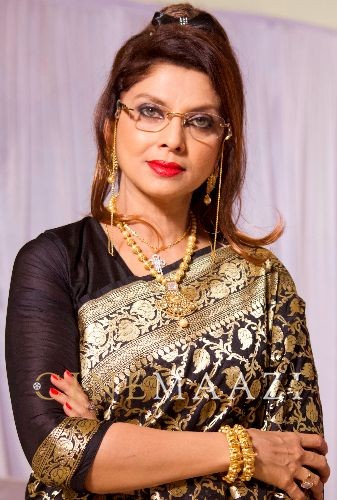 Varsha Usgaonkar has earned fame as a stage actress, film actress, and singer. Born on February 28, 1968, she hails from Goa and is the daughter of Goa's Deputy Speaker A. K. S. Usgaonkar. After her graduation from Mumbai University she was introduced to Marathi drama by Goa Kala Akademi’s Damu Kenkre in a comedy-drama titled Brahmachari (Bachelor) in 1984, in which she played the lead. She made her Marathi film debut with Gammat Jammat (1987) alongside Ashok Saraf and Sachin. The film is most popularly known for the song Ashwini ye naa. She rose to become one of the top heroines of the Marathi film industry. Some of her Marathi films include Dhumakal (1990), Gadbad Ghottala (1986),Hamaal de Dhamaal (1989), Saglikadde Bombabomb (1988), Sawat Mhaji Ladki (1993), Shezari Shezari (1991), Ek Hota Vidushak (1993), Lapandav (1993), Aflatoon (1991), and Bhavishyachi Aishi Taishi (2017).

She made her debut in Hindi films with a special role in Doodh Ka Karz (1990), produced by filmmaker Salim Akhtar. It was the start of many films such as F.C. Mehra’s Shikari(1991), and Saathi (1991) opposite Aditya Pancholi. She worked opposite leading actors such as Nana Patekar (Tirangaa, 1993), Rishi Kapoor (Honeymoon, 1992), Anil Kapoor (Ghar Jamai, 1992), and Rajnikanth (Insaniyat Ke Devta, 1993). Her career in Hindi films saw her starring as the lead actress in Ghar Aaya Mera Pardesi(1993) and Pathreela Raasta (1994). She later moved to supporting roles, in Mangal Pandey: The Rising(2005) and Mr Ya Miss (2005).

Starting her television career, she played the role of Uttara, wife of Abhimanyu and mother of Parikshit, in Mahabharat in 1988. She also played pivotal roles in serials like Jhansi Ki Rani, produced by Hema Malini and directed by Ravi Chopra, Ardhangin, Talaq, Chandrakanta, Vishnupuran, Alvida Darling, Kabhie Kabhie,and Durgesh Nandini. She appeared in various Marathi TV shows including Aakash Zep, Tuzyavina and Eka Mekansathi. A popular anchor, she has hosted many shows and music programmes like Music Masti Gappa Gaani which she did on DD Sahyadri for 8 years, winning the Best Anchor award for the same by Doordarshan in 2010.

Varsha Usgaonkar played the mother-in–law’s role in the Konkani film Zanvoy No.1, which was well appreciated by the audience.

As a singer, she rendered four songs composed by Ulhas Buyao in the album titled Rup Tujem Laita Pixem, as well as other popular songs in Marathi. She has also done films in Bengali, Telugu, Bhojpuri, Chattisgarhi, Rajasthani, English and Konkani. The learning acquired during a two-year course in Theatre Science from the Marathwada University, Aurangabad has held her in good stead.