Devki Babu (Rehman) and brother Birju (Pran) are Farmers living a peaceful existence in a village on the banks on the river Ganga. The eldest, Devki Babu, has a son, Dinesh. Birju has a son Chander and a daughter. Birju's wife Shoba (Nirupa Roy) has a motherly affection towards Dinesh.

One day, the body of a village belle, Champa is fished out of the river. A village Zaminder Ramesh is suspected of doing away with her life, after she had resented his advances. The only witness who could have sent the Zamindar to the gallows is Birju. But, he is heavily bribed and his lips are sealed. Taking the sacred "Gangajal" in his palm, he solemnly takes an oath and establishes an alibi for the Zamindar. The Zamindar is saved. Devki Babu asks younger brother Birju to vacate his hearth and home.

Time passes. Devki Babu's son Dinesh grows up into manhood and now he dreams of giving his sleepy village a 'new look' with modern farming methods and a farmers' co-operative movement.

After completion of his studies, Dinesh starts helping his father in the fields. The father, who would  rather prefer his son to seek pastures new in a city, persuades him to go there in search of  a job.

In the city, Dinesh meets his uncle Birju and aunt Shoba. There is a joyful reunion. But, their happiness is short lived; for, Chander who arrives at his parental home, does not like the affection showered upon his cousin.

Dinesh, who is in search of a job meets Ashok Babu who is impressed by the young man's zeal for betterment of his village. He comes to know that his friend Manju (Yogeeta Bali) is the daughter of Ashok Babu. So, he returns to the village and persuades Manju to come to the city with him to meet her father. Manju who had left the protection of her family, disgusted at the treatment meted out by Ashok Babu to her mother (Achla Sachdev) is in no mood for reconciliation.

Just then there is an upheaval in the life of Dinesh. Birju had been nursing a secret sorrow in his breast: he was sure that the displeasure of Ganga at his perjury had angered Ganga who had destroyed his village. Chander, the villain of the piece, wants to wreak his vengeance upon his father, for being so fond of Dinesh. He declares to prove the world that his father is insane. Birju picks up a rifle and kills his son.

There is a conflict in the heart of Devki Babu. As luck would have it, he was present when the father and son had quarrelled, and he has seen with his own eyes his own brother kill Chander!
Should he tell the truth? Must he take a false oath to save his own brother's life?

A tense courtroom drama follows................ a drama that will tug at your heartstrings.
The answers to all these questions will be unravelled before your eyes on the silver screen. 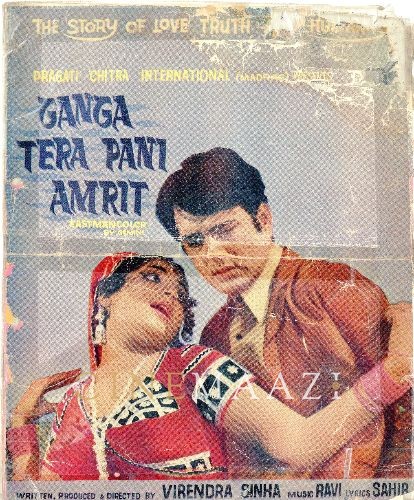