Jassu, an orphan and a Hindu, was adopted by Inayat Mian and brought up with a great deal of love and affection. Jassu was always searching for his lost younger brother, unaware that he had fallen into evil hands. Jassu grew up to be an upright and honest youngman, whilst his brother had become a criminal and has assumed the name of Vikram. Vikram was a member of Bhoopsingh's notorious gang of dacoits.

Bhoopsingh had not always been a criminal, but when Seth Laxmichand swindled him of his life's savings which led to his sister Sundari taking her own life, Bhoopsingh murdered Laxmichand to become  a wanted man. One crime led to another, and Bhoopsingh just managed to keep a step ahead of the police. With his ill-earned money, Bhoopsingh secretly met his wife and provided for his daughter's education. Nisha, his daughter, never knew that her father was anything but a gentleman who had died leaving mother and child a large fortune.

Jassu once found himself falsely arrested, and had occasion to meet Bhoopsingh in the lock-up. Bhoopsingh poured his heart out before Jassu, and begged him to help Nisha and her mother. He gave Jassu his ring as identification.
Jassu was welcomed by Devi, Nisha's mother, who told Nisha that he was a near relative from their village and would now live with them.

Laxmichand had left his son. Rajesh, now a youngman, Rajesh mother hatched a plot that Rajesh seduce Nisha, and by ruining her life have revenge for his father's death at the hands of Bhoopsingh. Jassu had become strongly attached to Nisha, but the latter detested him as an unwanted intruder into the household. After all, Jassu was no better than a village bumpkin. At this juncture, Devi's faithful retainers, Mary the cook and Pinto the butler, aided by their friend Talkie came to Jassu's rescue. Under their tutelage, Jassu was transformed into a modern day Romeo.

How Jassu succeeds in snatching Nisha away from the wily Rajesh, to win her hand and heart for himself, and how he is instrumental in dragging his long lost brother Vikram away from the path of crime forms the climax of the absorbing story that is "KAANCH KI DEEWAR". 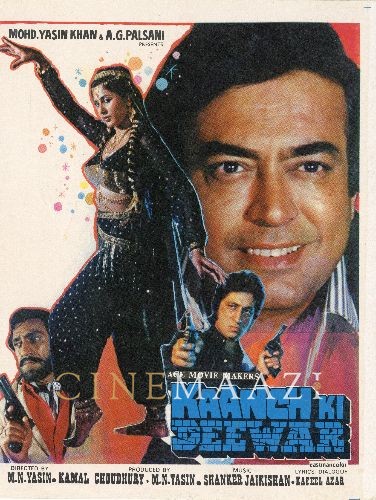