PYARA DUSHMAN is a story of three children of a very rich man, who were tossed on the waves of Destiny into different directions.

PYARA DUSHMAN is an emotional story of three young couples....

Once a thief, Shiva is madly in love with Seema, a golden hearted nautch girl. During the colourful Holi celebrations and also at her kotha, he sings and dances only for her.

Finally, he decides to give up crime, marry her and settle down in life as an honest man.

And God blessed them with an innocent charming baby girl. But the shadow of his past haunts him and eclipses the couple's dreams and desires of a normal life.

Driven by the horrors of hunger, Shiva defies God, kicks the society and wields the power of his knife again but.......

Amar was picked up by a Police Inspector from a drowning tragedy of a rail accident. He grows up to be a defiant law man - a Police Inspector married to a kleptomaniac wife Geeta, he is behind the blood of Shiva like a hound whom he suspects to be the murderer of his foster father. But the iron arms of law are twisted by Shiva's honesty and......

Raja, the lost brother of Amar and Seema, can inherit his 'father's wealth only if he marries Reema and they both stay together for one whole year as husband and wife.

Reema and Raja hate each other due to ideological clashes. Reema is a mod teenager believes in free society while Raja is a matured young man for whom ideals and culture are the prime factors of living.

PYARA DUSHMAN is the whirlpool of emotions and actions.

PYARA DUSHMAN is a tornado of entertainment, music and laughter.

All woven into riotous experience of a grand entertainer on the silver screen. 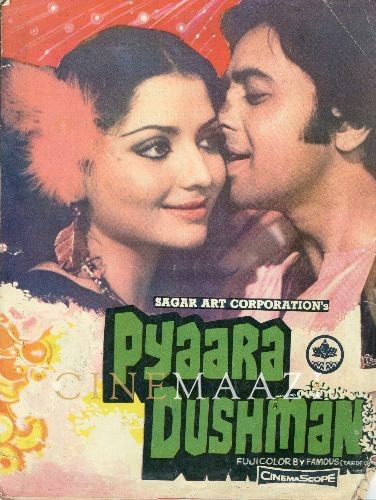