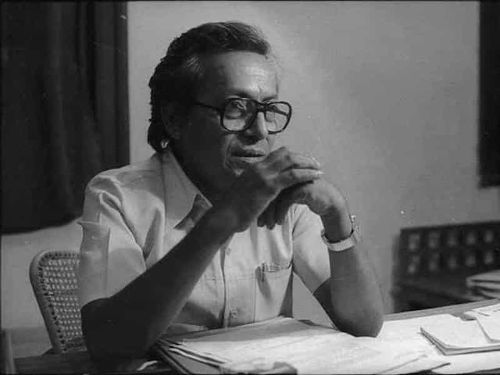 Padma Bhushan award-winning writer Kamleshwar is known for his works in the literary as well as the film space. He is credited with penning interestingly woven hits such as Pati Patni Aur Woh (1978), The Burning Train (1980), Ram Balram (1980), Aandhi (1975), Mausam (1975), and Rang Birangi (1983). He won the Filmfare Award for Best Screenplay for Pati Patni Aur Woh, directed by B R Chopra. A celebrated litterateur, he is considered part of the league of Hindi writers like Mohan Rakesh, Nirmal Verma, Rajendra Yadav and Bhisham Sahni, who launched Hindi literature’s Nayi Kahani movement in the 1950s, giving voice to the new sensibilities of a post-Independence India. His works include Kali Andhi, Wahi Baat, and Azadi Mubarak Aur Doosri Muntakhab Kahaniyan. Awarded the Sahitya Akademi Award for his Hindi novel Kitne Pakistan, it was also translated into English as Partitions.

Born Kamleshwar Prasad Saxena on 6 January, 1932, he grew up in Uttar Pradesh’s Mainpuri district. He was 16 when his first story, Comrade, was published in 1948. Completing his graduation, followed by a Master's degree in Hindi literature from Allahabad University, his first novel, Badnam Gali (Cursed Lane), was published while he was still a student. He went on to begin his literary career in Allahabad itself.

His fame as a short story writer grew with his vivid depiction of contemporary life. The publication of his story, Raja Nirbansiya (1957), placed him in the league of leading writers of his times. In the course of his prolific career, which spanned four decades, he penned more than three hundred stories, including, Maans Ka Dariya, Neeli Jheel and Kasbe Ka Aadmi. He published over ten collections of short stories and ten novels, prominent among which are Ek Sadak Sattawan Galiyan, Laute Huye Musafir, Kaali Aandhi, Aagami Ateet, Registan and Kitne Pakistan. He also has to his credit 35 other literary works in different genres ranging from literary criticism, travelogue, and memoirs, to socio-cultural commentary.

Kamleshwar’s tryst with cinema began when he moved to Bombay in the 1970s, and started writing scripts and dialogues for Hindi films. Over the years, he worked on several feature films. These include Gulzar’s Aandhi which inspired his novel Kaali Aandhi, Mausam, Basu Chatterjee’s Chhoti Si Baat, Rang Birangi and Ravi Chopra’s The Burning Train.

Aandhi, which he penned, was a political drama film starring Sanjeev Kumar and Suchitra Sen. The story was based on a chance meeting of an estranged couple after several years, when the wife, now a leading politician, happens to stay at the hotel run by her husband during an election campaign. With noted actress from Bengali cinema – Suchitra Sen, and Sanjeev Kumar essaying the lead roles, the film was also noted for its songs composed by R D Burman, written by Gulzar, and sung by Kishore Kumar and Lata Mangeshkar. The film won the Filmfare Award for Best Film (Critics), and also earned Sanjeev Kumar the Filmfare Award for Best Actor.

He also penned the Gulzar-directed Mausam which released the same year. A musical romance film starring Sanjeev Kumar and Sharmila Tagore, it was loosely based on the 1961 novel, The Judas Tree, by A J Cronin. Sharmila Tagore earned the Silver Lotus Award at the 23rd National Film Festival for her acting, while the film itself was awarded the Second Best Feature Film. Nominated in eight categories at the 24th Filmfare Awards, it won in two.

Penning Pati Patni Aur Who, which was produced and directed by B R Chopra, the film explored the topic of extramarital affairs albeit in a light-hearted fashion. It told the tale of Ranjeet Chaddha (Sanjeev Kumar)’s shenanigans as he keeps his wife (Vidya Sinha) and his girlfriend (Ranjeeta Kaur) unaware of each other’s existence. The film earned Kamleshwar the Filmfare Award for Best Screenplay.

His film, The Burning Train, was an action thriller that revolved around a dedicated railway employee's plan to introduce an express train, which results in sabotage by his enemies. The film featured an all-star cast comprising Dharmendra, Hema Malini, Vinod Khanna, Parveen Babi, Jeetendra, Neetu Singh, Vinod Mehra, Navin Nischol, and Danny Denzongpa, with music by R D Burman. It became the seventh highest-grossing Indian film of 1980.

Penning the actioner Ram Balram, directed by Vijay Anand, the film went on to achieve super hit status. Starring Dharmendra and Amitabh Bachchan in pivotal roles, along with the supporting cast including Zeenat Aman and Rekha, it told the tale of revenge extracted by two wronged brothers.

His work in television is both considerable and valuable. He made his first short TV film Jamuna Bazar in the late 1970s. Switching to television script-writing, over the years he penned stories for serials such as Chandrakanta, Aakash Ganga, Yug and Betal Pachisi, as well as popular serials based on literary works like Darpan and Ek Kahani. Hosting a popular talk show on Doordarshan titled Parikrama, he also started a weekly literary show, Patrika. He is also credited with producing and directing several television programs and investigative documentaries on social and political issues for Doordarshan. He served as Additional Director General of Doordarshan, India’s national television channel, from 1980 to 1982.

His literary works depict the trials and tribulations of a fast changing society, searching for new values amidst the collapse of the old value system. His writings revolved around the woes of contemporary society, which he saw as being in the grips of excessive materialism. His works portrayed true human sensitivity as the antithesis of the sense of loneliness and alienation that characterises the modern metropolis. The characters he created were ordinary, middle class people.

Awarded the 2003 Sahitya Akademi Award for his novel based on the Partition of India in 1947, Kitne Pakistan, it explored the way nations fracture, through an allegorical court trial, wherein historical and political figures are present as witnesses. The Sahitya Akademi remarked that “his utter self-restraint in experimentation both with technique and form lends a forceful character to his treatment.” Reminiscing his work, poet-director, Gulzar had commented, “In Kitne Pakistan, there is a description where a handkerchief falls off the bridge; I always used to tell him that I could write a complete short story on this one line only.” His bibliography includes The Street with Fifty-Seven Lanes, Not Flowers of Henna, Partitions, and George Pancham Ki Naak.

He was awarded the Padma Bhushan in 2005.

Kamleshwar passed away on 27 January, 2007 at Faridabad, New Delhi, following a heart attack.