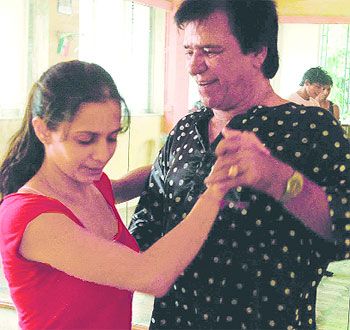 Oscar Unger, gifted dancer and choreographer, was part of the famous Vijay-Oscar duo that choreographed scores of dance sequences over the decades in more than 100 films. These include Kab? Kyoon? Aur Kahan? (1970), Dharmatma (1975), Inkaar (1977), Shalimar (1978), Do Aur Do Paanch (1980), Saajan Ki Saheli (1981), Kaalia (1981), Baazi (1984), Love 86 (1986), Janbaaz (1986), Kaun Kare Kurbanie (1991), Khamoshi: The Musical (1996), Is Raat Ki Subah Nahin (1996), and Censor (2001). The last film Oscar choreographed was Sudhir Mishra’s Khoya Khoya Chand (2007). Earlier in his career, he was famous for portraying the lead singer/ dancer in the fictional band Ted Lyons and His Cubs in several Hindi films. Among his famous numbers are Rambha ho from Armaan (1981), Aap jaisa koi from Qurbani (1980) and I am a street dancer from Ilzaam (1986). He is credited as the one who directed Helen to sway sensationally in the song Mungda mungda (Inkaar, 1977), as well as taught the fluid Govinda a few smooth moves. After he retired from choreography, his dance training school Oscar Creations became popular for those desiring to make a mark in western dance. The school’s students included Kamal Haasan, Vivek Oberoi, Antara Mali and Onjolee Nair.

Oscar Unger initially worked as an anti-aircraft gunner in the Navy. Singing and dancing, however, were part of his life in the Navy, as a means of relaxation and recreation while at sea. Films beckoned when he once accompanied his rock ‘n’ roll partner for a rehearsal of Tere Ghar Ke Samne (1963), involving around 50 youngsters. Asked to do an impromptu jig, he was selected by the film's choreographer, veteran Surya Kumar, to join the chorus. He was 22 at the time, and thus began his career in Hindi films.

The Vijay-Oscar duo thrived through the 70s and the 80s, leaving their mark in numerous films. If they choreographed Helen in umpteen cabaret sequences, they also aced the disco era that was ushered in, in the 80s. Oscar choreographed hit songs during this period, such as Aap jaisa koi featuring Zeenat Aman in Qurbani, and I am a street dancer from Ilzaam, featuring Govinda. The Vijay-Oscar pair were regulars in all Feroze Khan films which were known for their stylish dance sequences as seen in numbers such as Laila mein laila, and Ek to kum zindagani. To them also goes credit for introducing break dance and a mix of rock and jazz to create foot-tapping disco numbers. By the 90s, Oscar had largely withdrawn from the industry, choreographing just a few films. These include songs in Sudhir Mishra’s Is Raat Ki Subah Nahin (1996), and the Sanjay Leela Bhansali-directed Khamoshi: The Musical (1996). For Sudhir Mishra’s Khoya Khoya Chand, for the song Yeh nigahein picturised on Soha Ali Khan, Rajit Kapoor, and Soniya Jehan, Oscar recreated the 60s style of dancing. It depicted the actor playing a piano with the actresses dancing around it, and involved dancing on the toes and going backwards instead of forward.

In the later years, Oscar pointed out that a career in dance and choreography in contemporary times had become feasible as good dancers could earn Rs.5000 per shift compared to the Rs.26 and four annas that he was paid in his time for an 8-hour shift. While his personal favourite dancers were Helen, Zeenat Aman, Sridevi, Madhuri Dixit and Govinda, he wished to choreograph Hrithik Roshan, whom he regarded as the sole good dancer in the industry in current times.

Oscar was married to Jennifer aka Jenny, younger sister of popular dancer-actress Helen. After they divorced, he married fellow dancer Teresa Nazareth in 1979.