Legendary poet, Hindi film lyricist and founder of Vividh Bharati, Pandit Narendra Sharma was also an intellectual and a journalist. He is known for penning memorable songs for Hindi films such as the title song Satyam shivam sundaram and Yashomati maiya se bole nandlala (Satyam Shivam Sundaram, 1979), Jyoti kalash chhalke (Bhabhi Ki Chudiyan, 1961), Bhanware ne khilaya phool (Prem Rog, 1982 ), and Preet ka naata jodnewala (Afsar, 1950). A scholar of Hindi and Urdu, he blended the tradition of Kabir and Meera with the lyricism of ghazals and Urdu poetry, thus bringing to Hindi cinema a language imbued with the literature of Allahabad. Other films he penned lyrics for include Aandhiyan (1952), Jeewan Jyoti (1953), Bhai Bahen (1969, Umbartha (1982), Ram Ki Ganga (1984), and Jalwa (1987). He also served as conceptual advisor as well as lyricist for B R Chopra’s teleserial Mahabharata. To him goes credit for reviving All India Radio by establishing the popular radio channel Vividh Bharati, generating listeners that rose to approximately 35 crore.

Born on 28 February, 1913 in the Jahangirpur district of Uttar Pradesh, he lost his father Purna Lal Sharma when he was just four years of age. He was raised by his uncle and his mother. A gifted child, he entered school straight into class 7 and was a top student in his class. Passing his Intermediate from Khurja, he joined Allahabad University, earning his Masters in English Literature & Education.

In the ‘Sangam city’ of Allahabad, he was introduced to Hindi literature greats such as Niralaji, Mahadevi, Pant, Bachchan, Kedar Nath, Shamsher and others. His book of poems Shool – Phool was released when he was 20. He was sub-editor of the Hindi daily newspaper Abhyudaya, and also taught English and Hindi poetry at Benaras Hindu University. Joining the All India Congress Committee at Allahabad as Hindi Secretary to Pandit Jawaharlal Nehru, he later served as Hindi Adhikari in February 1955. Having thrown himself into India’s struggle for Independence, his experiences moulded his personality and creativity. Like the admirable Harivanshrai Bachchan, he explored poetry and won respect and love for his work from readers as well as peers.

Coming to Bombay in 1942 with Bhagwati Charan Varma, the author of Chitralekha, he went on to start work as a lyricist with the prominent studio Bombay Talkies. It was a fortuitous time for him as the well-known Kavi Pradeep, who had been associated with the studio, had left following differences with the management.

Sharma was recommended to the studio owner Devika Rani by Bhagwati Charan Varma, who wrote the film Pratima (1945) for Bombay Talkies. He made his debut as a lyricist with the Devika Rani starrer Hamaari Baat (1943). He penned songs such as Ae baad-e-saba ithlati na aa, Karvate badal raha hai aaj sab jahan, Main un ki ban jaayun re, Insan kya jo thokare nasib ki na sah sake, and Jivan jamuna paar milenge for the film. He paired well with the music composer of the film—Anil Biswas, who could comprehend the tone and emotion of his lyrics.

He went on to write the lyrics for the film Pratima (1945), which marked the debut of an actor named Yusuf Khan, who would go on to become a great thespian of Indian cinema. It was apparently Sharma who had suggested the name Dilip Kumar to the actor, by which he came to be widely known.

His classical lyrics made a deep impression, rendered by renowned singers such as Lata Mangeshkar (Jyoti kalash challke and Satyam shivam sundaram) and Manna Dey (Naach mayura). The philosophical message of the title track of Raj Kapoor’s Satyam Shivam Sundaram propagated the idea of the divinity of beauty and truth. His work earned him his first Filmfare nomination for Best Lyrics.

In 1952, he was invited by Prime Minister Jawaharlal Nehru to manage Vividh Bharati – the new branch of All India Ratio. Achieving enormous popularity, the channel’s listenership reached a record-making 97% by 1970. The channel’s popular programme Binaca Geetmala was a huge hit across the country, whipping up considerable interest in Hindi film songs and lyrics. He remained with Vividh Bharati until his retirement.

Among the non-film songs that he penned are bhajans, devotional songs and poems which include Satrang chunar navrang paag, Naach re mayura bolkar sahasra nayan, and Aiye prabhui aaiye. He also penned the theme song of the 1982 Asian Games. His poetic compositions include Kahani Kehte Kehte, Paniharin, and Rathwan. He also faced the camera in two films, namely Jai Maa Karva Chauth (1994) and Holi (1985).

Understanding the “changing social scene and the changing modern mind”, he and Mr Pai were the first to introduce the Ramayan and Mahabharat via Indrajaal comic strip for children.

Pandit Narendra Sharma passed away on 11 February, 1989. He remains memorable for voicing the presence of the divine in all things through his lyrics and poetry. 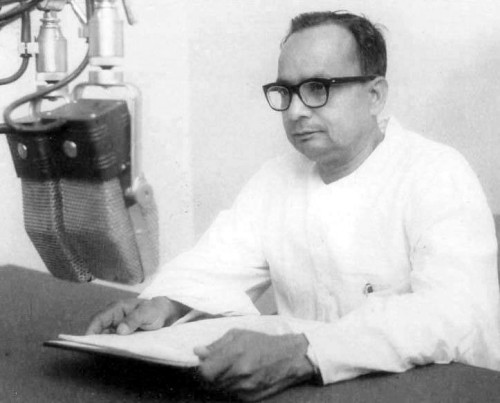