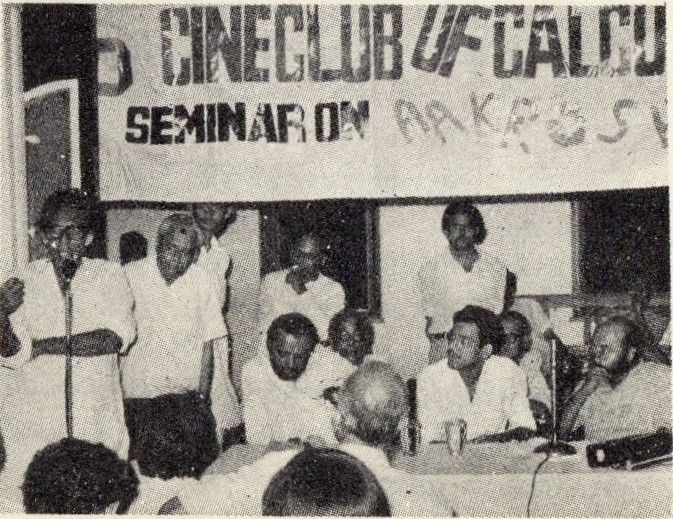 Discussion of Aakrosh sponsored by Cine Club of Calcutta

The silent era of the Indian cinema can perhaps be written off but for the historical interest in the thirties and forties. The Indian film then drew largely on mythology, historical events, social and later political situations for its themes, always with a clear inclination for the spectacular.  But even these films were woefully inadequate in cinematic sensibilities and expression. The Indian film societies cannot, therefore, be criticised on the ground that they have looked West.

Nevertheless, Calcutta Film Society form which the movement developed, screened Ram Shastri (1944) and Sant Tukaram (1936). When Uday Shankar's Kalpana was released in 1948, the society purchased and distributed tickets among its members. Later it organised a Mehboob session in 1966, the society held a festival of old Bengali films in two sessions in 1965 and 1966. Cine Central and Calcutta Cine Institute held Indian (or call it Regional) Film Festival.

Around this time Film Forum, Bombay, presented films of Prabhat Studio, defunct by then, in a few retrospectives of Master Vinayak, Hemen Gupta, Shantaram and Bimal Roy. In in 1970, this society brought out a special number of its journal, Close-up, devoted entirely to Indian Cinema and its various aspects. Earlier one issue contained several articles on Indian Censorship Regulations. In 1966, Anandam Film Society held festival of Satyajit Ray films and published a special issue of its journal, Montage, with articles on Ray films which is still considered a reference publication.

Delhi Film Society had the distinction of showing several films, Devi (1960), Sara Akash (1969), Swayamvaram (1972) even before they were released. (An interesting sidelight. The late Defence Minister V Krishna Menon was allowed to see Ray's Devi  at the pre-release show on the condition that he would come alone and not accompanied by his security men. Mr. Menon obliged and saw the film). In 1965, Madras Film Society held a discussion after screening Gemini's Hindi film Grahasthi (1963).

Around this time the Film Study and Information Group (FSIG) formed by the Federation, Calcutta, held a series of discussion meetings. In one of these meetings, Satyajit Ray read and articles on scenario, illustrating his point with excerpts of Kanchenjungha (1962), Postmaster and The World of Apu. In another meeting on scenario, Mrinal Sen illustrated his points from his own films, Punascha (1961), Abasheshe (1962) and Protinidhi (1964). Ritwik Ghatak spoke on editing with reference to his films.

In Bombay Film Forum's own study group used to sit at least once a month and often it concentrated on the aesthetic quality of Indian films. In 1965, a fresh graduate from the Film Institute and now a famous director Adoor Gopalakrishnan, started in Trivandrum not only a film society, Chitralekha-Film Society, but also, with his friends in the film society India's first film cooperative. Chitralekha Film Cooperative for production and distribution of Indian films. And within a few years we got Adoor's first feature, Swayamavaram (1972), winner of four national awards.

Some film societies contributed by making documentary films. While Calcutta Film Society made three films Durga Puja..Portrait of a City and Todo, Film Forum, Bombay captured the spirit of Bombay in celluloid in A City of the Sea.

A book on Ritwik Ghatak published in 1982 claimed, "Long after Ritwik Ghatak's death, the significance of his work is finally bursting out of obscurity". Obviously, the publisher of the book did not check the facts. Ritwik's films excepting Meghe Dhaka Tara (1960) and Subarnarekha (1962) did not fare well at the box office. But the significance of his work was clear to film societies and the interest in his work was sustained by film societies through repeated screenings in the sixties. In 1967 Calcutta Cine Institute held a festival of Ritwik's films and published a special issue of their journal Movie Montage on Ritwik's works. After Ritwik died in 1976, the FFSI, Calcutta paid homage to him by organising a week-long retrospective of his films and this was immensely popular Cine Central published a special issue of their journal, Chitrabikshan, which has by now become a reference journal on Ritwik's works.

In the seventies, the pattern of activities underwent a change following the emergence of a number of new talented filmmakers. New talent sometimes needs support from other quarters, sepcially in the context of the powerful commercial film industry in India. Some film societies took up this promotional venture. Basu Chatterjee's Sara Akash and Rajnigandha (1974), Mani Kaul's Uski Roti (1970), Kumar Sahani's Maya Darpan (1972), Pattabhirama Reddy's Samskara (1970), B.V. Karanth's Vamsha Vriksha (1971), Girish Karnad's Kaadu (1973), Girish Kassarvall's Ghatasraddha (1977), Buddhadev Das Gupta's Dooratwa (1981), Adoor Gopalkrishnan's Swayamavaram and Kodiyettam (1977), Aravindan's Thampur (1978) and Kumatty (1979) were screened by many film societies all over India. This inspired two producers in Calcutta to offer their Bengali films, specially Ray films, to the societies in Southern India and their expectations were not belied.

In the mid-70s, the Federtion and a few societies collaborated with the FFC (now known as the NFDC) in holding festivals of FFC produced Indian films in Calcutta, Bangalroe and Bombay. The FFC festival was held in Calcutta in 1974. The other feature was to hold sessions/festivals of regional films. Cine Club of Calcutta screened Assamese, Bengali, Marathi and Malayalam films in several sessions between 1977-82. The Federation circulated a short film, Mukti Chai and two feature films Mrinal Sen's Akash Kusum (1965) and Nabyendu Chatterji's Aaj Kaal Parshur Galpo (1981).

In the mid-70s, a film society Diristi, was formed in Bombay with the sole purpose of viewing Indian films. Two other Bombay societies took leading roles in promoting Indian films Prabhat Chitra Mandal and Cine Society the latter being mainly concerned in reviving interest in old Indian films. The societies at Nagpur, Jabalpur, Bhopal, Kolhapur, Bangalore, Trivandrum, Hyderabad, Vijayawada, Vishakhapatnam, Jodhpur, Asansol are regularly screening in Indian films from time to time despite several constraints as mentioned above.

Two big festivals were held in the beginning of the eighties. Nostalgia a festival of old Indian films, was organised in a big way by Suchitra Film Society Bangaloe. A Ray retrospective was held in Calcutta by Cine Central to commemorate 25 years of Pather Panchali (1955). While Suchitra Flm Society Bangalore held a second festival of Indian films in 1983 under the title Chitrabharati. Cine Central Calcutta screened Indian Panorama films and repeated the Ray retrospective in 19854. Seagull Film Society a new society in Calcutta, started with a session of Prithviraj Kapoor films. It organised a session of Amol Palekar's films and a retrospective of Adoor Gopalkrishnan in 1985 followed by discussions with the directors.

The lively interest evinced by the film societies in regional films inspired their apex body Federation of Film Societies of India take up a new scheme, Regional Film Promotion Scheme. The Central Government gave a grant of Rs. 15 lakhs. The Federation raised an equal sum from the societies. Under the scheme, the Federation has till now purchased eleven films in different Indian languages. Some of these films have already been sub-titled in English. Also notable is the joint FFSI  NFAI programme on screening of Indian classics in Delhi, Bangalore and Calcutta.
Concern for Indian films was also reflected in other activities. Since 1979, Cine Club of Calcutta has been holding a Ritwik Memorial Lecture and the subjects dealt with include caste conflict in Kannada Cinema, crisis in Indian Cinema, traditional Indian Cinema and New Indian Cinema, etc. Screen Unit, Bombay has published a book on Ritwik Ghatak and his films.

Satyajit Ray started the movement Ritwik Ghatak and Mrinal Sen drew inspiration from the film society screenings. Shyam Benegal, Adoor Gopalakrishnan, M.S. Sathyu founded film societies. Basu Chatterjee and Adoor were office-bearers of the Federation for several years. It is, therefore, a mistaken in India take no interest in the country's own cinema.

This article was written by Ajoy Das and was originally published in Filmotsav 86, Indian Cinema 1985. The images are takes from the original article.