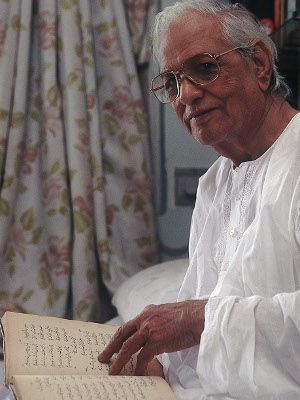 Even though it's almost impossible to imagine Hindi cinema without its songs, lyricists are more often than not forgotten or relegated to the lower ends when compiling lists of all time greats. Time and again playback singers and music composers have been adorned the same larger than life status as film stars, but barring a handful such as Gulzar, and that too towards the twilight of their careers, such honorifics have eluded many deserving wordsmiths.

With such parameters, it's hardly surprising that even amongst lyricists Majrooh Sultanpuri is the fourth or fifth name after Shailendra, Sahir and perhaps Gulzar that comes to mind when thinking of the all-time great poets to grace Hindi cinema.

The fact that Majrooh's isn't the first name in any such list, ironically enough, is a testimony of just how great and silent his contribution to the universe of Hindi film music really has been.

On the face of it, there might not be much in common among K L Saigal, Dev Anand, Shammi Kapoor, Rishi Kapoor and Aamir Khan, but look closely and you would notice that the greatest songs associated with them were penned by Majrooh. In 1945, Asrar-ul-Hasan Khan "Majrooh" visited what was then Bombay for a mushaira and was immediately approached by producer A R Kardar via poet "Jigar" Moradabadi, who was Majrooh's mentor, to write for films but the poet refused for he considered the business to be too lowly a profession. Had it not been for Moradabadi who pushed him to give it a shot largely for the money, Majrooh would have returned to being a hakim and practising medicine for which he had trained.

Majrooh impressed Naushad in their very first meeting by penning words to a tune that the maestro had thrown at him as a test and the result was Jab usne gesu bikhraye, badal aaye jhoom ke for Shahjehan (1946).

The film's music, especially the song Gham diye mushtaqil became a rage and K L Saigal even instructed another unforgettable tune from the film, Jab dil hi toot gaya to be played at his funeral. One of the prominent members of the Progressive Writers' movement, Majrooh's leftist leanings and his anti-imperialistic poetry got him incarcerated for a brief period in the late 1940s and along with Balraj Sahani he was one of the eminent artists to be jailed by the British. Along with other progressives such as Sahir, Majrooh was a dominating name in Hindi film music and was one of the first to introduce the ghazal into film music. He worked with most of the popular music composers through the 1950s and 1960s, and was perhaps single-handedly responsible in making poetry permeate into film music without losing the essence of situation or the character that it was written for.

Majrooh's brilliance lay in the simplicity with which he chose words, for instance, the oft-repeated word for a beloved in Hindi lyrics "sanam" that literally meant "idol" was first used by Majrooh, and throughout his five-decade-long career Majrooh was unmatched when it came to writing to a pre-decided tune. Unlike Sahir, he never let the poet in him feel threatened while doing so and never did he feel lesser to music directors who attained more renown than lyricists. In fact, it was Majrooh who suggested R D Burman to Nasir Hussain for Teesri Manzil (1966) and in a roundabout manner gifted Hindi cinema with one of its best musical partnerships.

Nearly a decade later, Majrooh would once again give Shammi Kapoor some of his greatest songs in Vijay Anand's Teesri Manzil whose soundtrack included Aaja raja main pear tera (Asha Bhosle, Mohammad Rafi) and O haseena zulfonwali (Asha Bhonsle, Mohammad Rafi) and this time around too it was Dev Anand who walked out of the film before Shammi stepped in. In the 1970s, Majrooh hit a purple patch with Dastak (1970), Caravan (1971), Pakeezah (1972), Do Chor (1972), Abhimaan (1973), Yaadon Ki Baraat (1973) and Hum Kisise Se Kum Naheen (1977), the film that gave Rishi Kapoor a major image makeover and was a super hit during the height of the Amitabh Bachchan phase.

Majrooh's success continued well within the 1980s and he became one of the first from his generation to cut across and become a part of the new Bollywood. One of the few lyricists to have worked with not one, but two father-son composers in S D and RD Burman as well as Chitragupt and Anand-Milind, Majrooh's collaboration with Anand-Milind in Qayamat Se Qayamat Tak (1988) ushered in a new phase in Hindi film music. Majrooh's lyrics blended beautifully with Anand-Milind's uncharacteristically western style arrangement and even after three decades songs like Papa kehte hai (Udit Narayan), Aye mere humsafar (Alka Yagnik, Udit Narayan), Akele hai (Alka Yagnik, Udit Narayan) and Gazab ka hai din (Alka Yagnik, Udit Narayan) still standout. Majrooh went on to collaborate with his old friend producer Nasir Hussain and son Mansoor Khan again for Jo Jeeta Wohi Sikandar (1992) and wrote one of his later gems Pehla nasha (Sadhana Sargam, Udit Narayan), for then up and coming music composer duo Jatin-Lalit.

A foregone conclusion that the song might finally fetch Majrooh his second Filmfare award (the first for Chahunga main tujhe for Dosti (1965)), the snub at the ceremony was perhaps a letdown from which the lyricist never recovered. The evening saw Majrooh sahab walking up to collect his statuette while the nominations were still being announced and much to the shock of everyone only to find fellow nominee Sameer (Deewana (1992)) being declared the winner. Some part of the insult was salvaged the very next year when Majrooh sahab became the first lyricist to be conferred with the prestigious Dadasaheb Phalke award (1993).

The manner in which the film music business underwent a major change in the mid-1990s many veterans found themselves at sea with the new world order. The whole process of film music had changed and it was only with the likes of Jatin-Lalit that Majrooh could rekindle some of the old magic. A throwback on the older ways, Jatin-Lalit's score for Khamoshi - The Musical (1996) perfectly complimented the style Majrooh worked in and the soundtrack became one of his final film hits. Perhaps the only lyricist to work with composers beginning in the 1940s with Naushad to A R Rahman in the year 2000, Majrooh sahab left an indelible mark on music in Hindi cinema and there was hardly any genre that he couldn't master.

This article was originally published in Daily O on 1 October 2015. The images used in the article was not part of the original article and are taken from Cinemaazi archive.
650 views