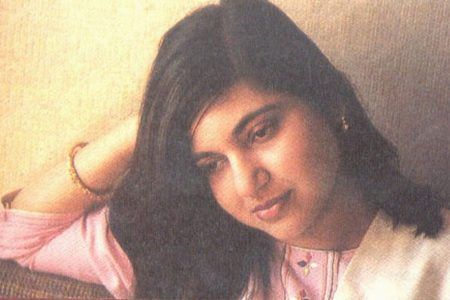 Among Hindi cinema’s most illustrious singers, Alka Yagnik’s dulcet, pure voice has charmed listeners over the decades. She has been alluded to by critics as the ‘honey-voiced singer’, the one with the ‘magical voice’, and even the ‘Queen of Playback Singing’. She has rendered playback for over 1000 Indian films, singing more than 8,000 songs in various Indian languages including Hindi, Assamese, Bengali, Gujarati, Malayalam, Marathi, Punjabi, Tamil and Telugu, in the course of a career spanning more than four decades. Whether romantic, sad, peppy, seductive or item numbers, Yagnik has effectively crooned across all genres. While she has rendered the maximum number of female solos, she is also currently the record-holder along with Asha Bhosle for the highest number of Filmfare awards won—namely, 7 out of a whopping 36 nominations. This is in addition to numerous other awards, including two National Awards, for her songs Ghoongat ki aad se from Hum Hain Rahi Pyar Ke (1993), and Kuch kuch hota hai from Kuch Kuch Hota Hai (1998). If additional testimony to her popularity were needed, 20 of her songs feature in BBC’s list of top 40 Hindi film soundtracks of all time. Entering the industry in the 80s, at a time when the legendary Lata Mangeshkar and Asha Bhosle still held sway, she created a niche for herself, and is said to have recorded an average of five songs a day in her heyday. She continues to render playback and is a big draw at concerts across the world.

Alka Yagnik was born in Calcutta on 20 March 1966 into a Gujarati family to father Dharmendra Shankar and Indian classical music singer mother Shubha, who was her first teacher. Alka was just six when, in 1972, she started singing bhajans for Akashvani (All India Radio), Calcutta. Aged 10, she was accompanied to Bombay by her mother, who was determined to see her talent shine as a child singer. However, despite being impressed by her voice, music directors Kalyanji Veerji Shah and Anandji Veerji Shah as well as music composer Laxmikant Shantaram Kudalkar of Laxmikant-Pyarelal fame, advised her to wait till her voice matured to become a full-fledged singer.

Alka went on to make her playback singing debut in the Rajshri film Payal Ki Jhankaar (1980). Her song Mere angane mein from Laawaris (1981) was followed by her first full-fledged song Hum tum rahenge for Rajesh Roshan in Hamari Bahu Alka (1982). However, she can be said to have truly hit the highs only with Ek do teen from the superhit Tezaab (1988). The song, a chart-busting success, counting the days of the month till the character meets her lover, became a rage, enacted by Madhuri Dixit onscreen. It also won Yagnik the first of her seven Filmfare Awards for Best Female Playback Singer.

She went on to become the voice of many younger-generation heroines, including Kajol and Preity Zinta. Through the 90s, she along with Kavita Krishnamurthy and Poornima, rendered playback for most of the leading ladies. She rendered duets with leading male singers of her time, singing mainly romantic songs with Kumar Sanu, and more flamboyant songs with Udit Narayan, and Sonu Nigam. Along with Sanu and Narayan, she was part of the 90s triumvirate of playback singing.

Controversy came calling with the suggestive song Choli ke peeche, penned by Anand Bakshi, which Yagnik rendered for Khal Nayak. The song was deemed obscene, and even banned on Doordarshan and All India Radio, besides facing legal challenge at the Central Board of Film Certification. Needless to add, it was a resounding hit. She rendered another controversial song, Din mein leti hai from Amanaat (1994) with Kumar Sanu and Ila Arun.

Besides film music, she has released private albums such as Tum Yaad Aaye in 1997 with Javed Akhtar and Raju Singh, Tum Aaye in 2002 with Javed Akhtar and Hariharan, and Shairana in 2003 with Javed Akhtar and Shankar Mahadevan. In 2012 she and Sonu Nigam sang a song Shiksha ka suraj as part of the National Literacy Mission of India; together they also sang Phool khil jayenge for child health awareness. Yagnik has also performed the Hanuman Chalisa and other devotional songs. At the other end of the spectrum, her song Chamma Chamma from China Gate (1998) featured in the song Hindi Sad Diamonds from the soundtrack of the Hollywood film Moulin Rouge (2001).

On the personal front, she is married to Shillong-based businessman Neeraj Kapoor since 1989. The couple has a daughter named Syesha Kapoor.