Indeed, the whole world was in the pocket of Vishal (Rishi Kapoor) as his big brother Karan (Shashi Kapoor) would provide him anything on earth for the mere asking.

And, the world was in the pocket of Karan so long as Mrs. Robins (Nadira), his conscience-keeper, would not let him leave too much for himself but leave some of it to God.

And, God did take care of Karan's innocent lies that he told Vishal to enable him pass off as the richest boy at College. In life Karan was the guy swinging on the trapeze in a circus. But for Vishal he was swinging from one country to the other.

Neeta (Neetu Singh), daughter of millionaire Gulab Chand (Raj Mehra) was destined to belong to Vishal. Her father would accept Vishal only if his brother was as rich as a man.

Destiny weaved another design. Diwan Chand (Agha) befriended Karan and his palatial home came to be the venue of Vishal's engagement with Neeta, the ceremony was conducted in regal splendour.

Now came the hour of trial !... Vishal wanted to go to U.S.A. for higher studies. Rs. 10,000/- was needed. Karan and Ravat (Ranjeet) gave a death-daring trapeze feat. But the circus owner (Prem Dhawan) valued it at Rs. 500/- nor would he lend that sizable amount. Neither would Karan accept Mrs. Robins gesture.

The trapeze-feat inspired a smuggler (Pinacho Kapoor). He negotiated with Ravat. But Ravat alone not enough for executing the design of the smuggler, Ravat concocted a sentimental story to rope in Karan. Innocent Karan became a party not only to a robbery but also to a murder.

Blood-thirsty action, dramatics, emotions and sentiments play up so that the viewer will feel "DUNIYA MERI JEB MEIN". 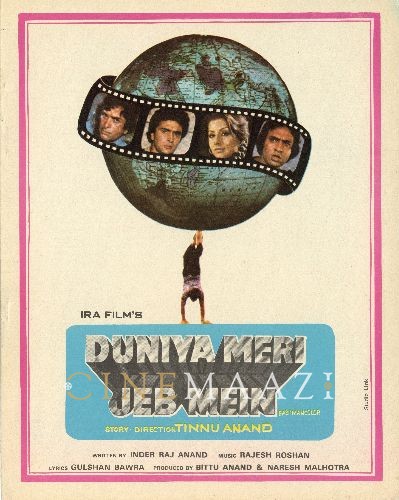