HEERON KA CHOR is the story of a mastermind thief, who plans, executes and succeeds in the greatest Diamond robbery of the country.

The entire Police & C.I.B. force is busy to catch the thief, but before they could find out the thief, situations take a dramatic turn, and it is revealed during the course of investigations that the most honest officer-in-charge to the "Diamond-Auction", Mr. Khanna is the culprit.

All the investigating departments of the country take this as the greatest unbelievable surprise of their life-time.

The most wanted, handsome, dashing & young man is Mohan, who is the singing sensation of the country, the craze of all the young girls and son of Mr. Khanna, the famous Diamond thief. (who is untraceable & absconding).

The young and beautiful daughter Geeta of Seth Heeralal is in love with Mohan. Mohan is disapproved by her father and is insulted. Mohan gets angry on him.

Seth Heeralal is murdered by his partner Daga. The charge is put on Mohan. Mohan absconds too.

But the eyewitness has seen Mr. Khanna.

Both innocent father and son are now absconding to save their lives and trace out the truth.

But before they could find out the real culprit, they had to pass through so many hurdles & traps and finally, the culprit is brought to the books.

Who was this Diamond thief?

What was his master plan?

How everytime he succeeded in Diamond robberies?

To know all this, see this movie marvel of S.K. KAPUR, blended with super excitement, thrills, action, music, dances and emotions.

"HEERON KA CHOR" IS A WHOLESOME ENTERTAINMENT FOR ALL. 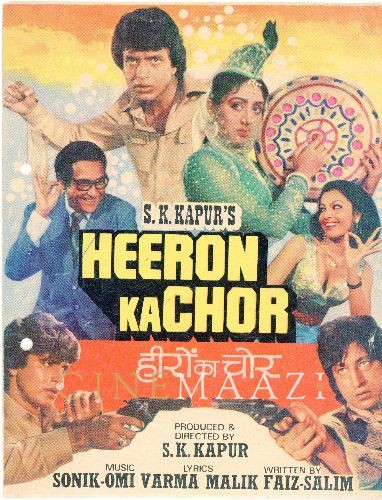