From the pages of the history of World War II comes this unforgettable story of a handful of dare devil heroes on one of the most dangerous missions on the Burma Front.

The Japanese had almost completed a secret airfield hidden inside the treacherous mountain ranges of the Burma-India border. This was a very big menace to India as this would open the gates for the occupation of this great country.

A handful of Indian Jawans and Officers of the British army were chosen to take up the challenge for this excitingly dangerous mission and send behind the enemy lines to sabotage and destroy the enemy's secret airfields.

While Rajan almost lost his life during the reconnaissance flights over the enemy territory, he gave vital information to headquarters before his plane was shot down by the enemy.

Ram headed the Commando group whose party had to play continuous hide-and-seek with the Japanese army and death.

Entwined with this chilling adventure-torn drama is the personal love-drama of both the brothers. The elder Rajan Kapoor believed in the immortality of love and was in true love with Dr. Usha Chowdhary working in a military hospital at an advance base.

The younger Ram Kapoor never believed either in immortality or even sanctity of love. He never meant a word when he talked love to his numerous girl friends. One amongst them was a tribal princess Toshi, who not only was in true love with him but also innocently and sincerely believed every word of this pseudo romantic Casa-Nova.

Presumed to be dead, Rajan was in reality a prisoner in the cruel hands of the enemy. While Rajan was refusing to break down under the vicious and physical tortures of the enemy, he was brave enough to even try a coup at one time. Though he had to pay dearly for all his brave acts; his undaunted spirit could never be crushed and even the Japanese threat to abduct his love, Dr. Usha, could not bow him down

In the meantime, Ram and his dedicated dare-devil band were crossing dangerous swamps and climbing perilous rocky cliffs to reach the enemy hide-out.

Ultimately, they reached there alive and while disguised as tribal labourers serving the Japanese to construct the airfield both the brothers had an emotionally moving reunion under the lashing whips of the Japanese guards.

The news of Rajan being alive thrilled everybody at the Allied bases, but the most profound effect was on Usha, whose blind faith in the immortality of love had kept dead Rajan alive.

It was here, in the midst of a spine chilling drama of adventure, danger, death and sabotage that the drama of the personal lives of Rajan, Ram, Usha and the tribal princess, Toshi, had its emotional explosion.

Here Ram comes to know what love binds Rajan and Usha and realises the depth of the true love of the tribal princess, but it is too late.

While Rajan is locked in a death dance in mid-air for the success of the mission, on the ground, Ram is paying the price of supreme sacrifice for love with love and life with life.

'LALKAR' comes to screen straight from the pages of a stirring novel by none other than Ramanand Sagar. 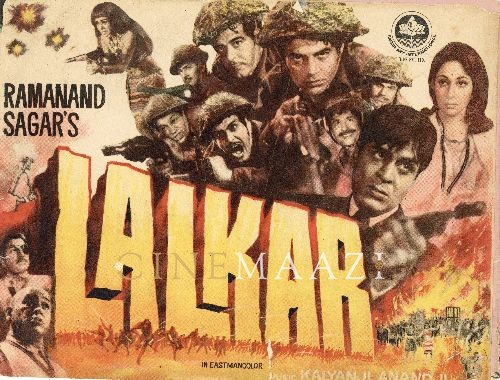