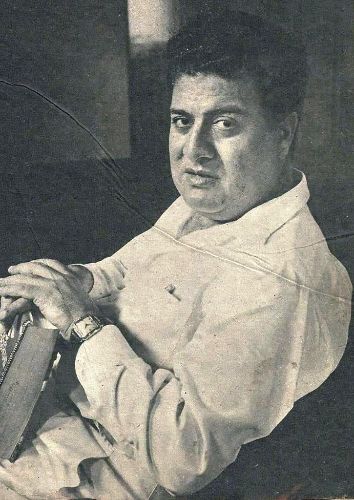 Prominent National Award-winning director, producer, writer, and lyricist Harnam Singh Rawail—popularly credited as H S Rawail—was a multi-faceted talent who carved a long career in Hindi cinema. He is known predominantly for his Muslim socials and romantic sagas such as Mere Mehboob (1963), Sunghursh (1968), Mehboob Ki Mehndi (1971) and Laila Majnu (1976). Making his debut as director with Dorangia Daku in 1940, he directed more than 20 films such as Shukriya (1944), Patanga (1949), Lehren (1953), Teerandaz (1955), Pocket Maar (1956), Roop Ki Rani Choron Ka Raja (1961), and Deedar-E-Yaar (1982). He is credited with producing Mehboob Ki Mehndi, Sunghursh, Mere Mehboob, Kanch Ki Gudiya (1961), and Shararat (1959). He also penned the screenplay for Laila Majnu, Mere Mehboob, Shararat and Pocket Maar, and is credited as cinematographer for Zid (1945). In the early phase of his career, he also penned the lyrics for songs in films, as well as faced the camera as an actor.

Born in Lyallpur, Punjab, British India on 21 August, 1921, he moved to Bombay as a teenager, as he had already decided that he would join the film industry and work towards becoming a film director. Roughing it out in the city, he slept on the streets and in the Madhav Baug temple precincts. He would later relive these experiences in his quasi-autobiographical film of 1956 - Pocket Maar.

Moving further to Calcutta, he served as assistant to filmmaker Kidar Sharma. Here, he was adopted by actress Ramola, along with a few other artistes. They would share an apartment, expenses for which were met by the actress. He also wrote the lyrics for songs of films such as Naa Hone Waali Baat (1938), Veer Kesari (1938), and Yaad Rahe (1940). Acting in a few Punjabi films in the early years of his career, he also featured onscreen in the R L Shorey (Sr) directorial, Pooran Bhagat (1940). In 1937, he had penned his first script - Banke Sipahi. It was a version of The Three Musketeers. At Indrapuri Studios he went on to write several scripts, usually in the stunt genre. It was here that he also made his debut as film director. The film was titled Dorangia Daku (1940) and he was just 19 years old at the time.

If his directorials Shukriya (1944), Zid (1945) and Jhoothi Kasmein (1948) were met with a tepid response, his next film Patanga (1949) was a hit, becoming the seventh highest grossing Hindi film of the year. The film, a romantic comedy, is still remembered for the song Mere piya gaye rangoon performed by Shamshad Begum, picturised on actor Gope and lead heroine Nigar Sultana. Rajendra Kumar was seen onscreen for the first time in the film, featuring in a one-minute scene.

Turning producer in Calcutta in 1948, he returned to Bombay the following year, where he established base. In 1955, he founded his production company Roshni Pics followed by Rahul Theatres in 1960.

He made waves with his romantic drama Shararat, starring Meena Kumari, Kishore Kumar, Raaj Kumar and Kumkum in lead roles. It featured the memorable song Hum matwale naujawan rendered by Kishore Kumar. The film saw Meena Kumari shed her ‘Tragedy Queen’ image to match Kumar’s boisterousness on screen. The plot revolved around Chandan and Shabnam who are in love and engaged to be married; however, Shabnam's father decides to marry her to Suraj. Chandan commits suicide. After her marriage, Shabnam is shocked to find out that Suraj's younger brother Deepak is the spitting image of Chandan. Soon she finds herself being accused of an illicit liaison with Deepak. Deepak leaves home, but a mischief-maker engineers a meeting between the two in order to convince Suraj that his wife is being unfaithful to him.

His 1961 family drama film Kanch Ki Gudiya saw him give Manoj Kumar a break alongside Sayeeda Khan, who is the mother of actor Kamal Sadanah. The film revolved around a young, luckless girl who goes through immense hardship after the death of her mother, but does not reconcile herself to a life of shame and degradation.

It was Rawail’s love stories that would eventually win appreciation. He saw major success with his 1963 musical Muslim social, Mere Mehboob starring Sadhana Shivdasani and Rajendra Kumar, who had previously worked as an assistant director to Rawail. It told the story of Anwar who loves Husna whose brother approves of the alliance despite the difference in their social status. Trouble comes in the form of a courtesan in Anwar’s life and Husna’s brother’s mounting debts. The film won praise for Rawail's direction and is remembered for its title song composed by music director Naushad and performed by singers Mohammed Rafi and Lata Mangeshkar. After the success of Mere Mehboob, he mainly concentrated on making period romances and love legends.

His directorial Sunghursh (1968) was based on the novel Laila Aasmaner Aaina written by the Bengali author Mahashweta Devi, which presents a fictionalised account of vendetta within a thuggee cult in the holy Indian town of Varanasi. The film was set in the 19th century and showcased the lives of bandits. It was praised for the performances by its actors like Dilip Kumar, Vyjayanthimala, Balraj Sahni, Sanjeev Kumar and Jayant. Incidentally, actor-director Rakesh Roshan had worked as an assistant director on the film.

Mehboob Ki Mehndi (1971), his directorial featuring Rajesh Khanna and Leena Chandavarkar, also fared well at the box office. It is counted among the 17 consecutive hits of superstar Khanna, who also co-produced the film. The film also won appreciation for its music composed by Laxmikant–Pyarelal. Based on the tezeeb (culture) of the bygone Nawab era, it told the tale of a young rich Muslim man Yusuf who agrees to marry a prostitute's daughter. It showed the importance of education as preached by Mahatma Gandhi. Shabana, the heroine is able to save herself, and her family, only by educating herself and working as a tutor.

In 1976 his directorial Laila Majnu, starring Rishi Kapoor and Ranjeeta Kaur—who made her debut in the film—in lead roles, became a success. Based on the legendary love story of the star-crossed lovers, the film revolved around Laila, a princess and Qais also known as Majnu, a common man. The film garnered highly positive reviews from film critics on its release, and became a box-office success. The mega success of the film established Rishi Kapoor as a bankable star, as he had lacked a major hit after his debut success in Bobby (1973), with the exception of Kabhi Kabhie (1976). The film has since been hailed as a cult classic.

His last directorial Deedar-e-Yaar, written by his son Rahul Rawail, was a romance film, starring Jeetendra, Rishi Kapoor, Rekha, and Tina Munim with music composed by Laxmikant-Pyarelal. The story revolved around two close and devout Muslim youth, Javed and Akhtar, who are childhood pals. However, they both unknowingly fall in love with the same woman.

After this film, he largely focused on producing films which were directed by his filmmaker son Rahul Rawail who is famed for his own hit directorials such as Betaab (1983), Arjun (1985), Dacait (1987), and Anjaam (1994).

Among the honours he won in the course of his career, are the Certificate of Merit for the Second Best Feature Film – Mere Mehboob as both producer and director at the 11th National Film Awards, and the Fourth Best Indian Film at the 32nd Annual BFJA Awards in 1968 for Sunghursh.