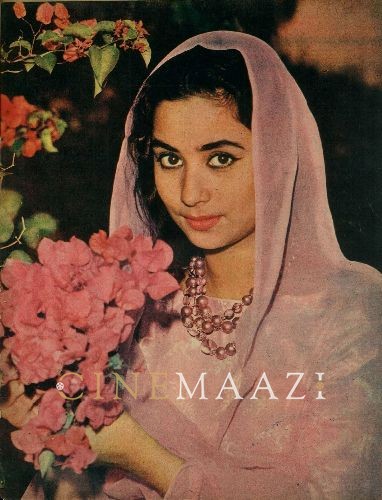 Actress Indrani Mukherjee, known for her style and grace, featured in more than 70 films in the course of her career, including Usne Kaha Tha (1960), Dharmputra (1961), Shaadi (1962), Grahasti (1963), Haqeeqat (1964), Shaheed (1965), Bharat Milap (1965), Mere Lal (1966), Aakhri Khat (1966), Naunihal (1967), Aan Milo Sajna (1970), Heer Raanjha (1970), Parvarish (1977), Dharam Veer (1977), Des Pardes (1978), and Mr. Natwarlal (1979). Active during the 60s and 70s, she played the heroine in films such as Usne Kaha Tha (1960) and Aakhri Khat (1966). Later she moved into the space of character roles where she acted in numerous films, making her mark with intense performances.
Born on 1 March, 1942 in Allahabad, United Provinces, Indrani Mukherjee was one of seven children born to homemaker Kamini Devi Mukherjee and Dr Jitendra Mukherjee, who practised in Allahabad. She started taking part in Hindi radio plays at All India Radio, Allahabad. Her elder sister Maya was already an actress in Bengali cinema, when she happened to enter a beauty competition, wherein actresses Nutan and Shobhana Samarth were judges. Indrani made her debut in films with the Moni Bhattacharjee-directed and Bimal Roy-produced Usne Kaha Tha (1960). She was just 15 when she entered the industry. Seeing an advertisement by Bimal Roy Productions scouting for newcomers, she auditioned for the production company. As she had seen the advertisement late, she was the last to audition. Renowned filmmaker Bimal Roy liked her photograph and also found her Hindi good; however, she would also have to give a screen test. The scene required her to tie a band on the hand of the hero who was to leave for war. At that moment, she felt a surge of emotions, began crying and fell down. Her performance left everyone stunned, and a spontaneous applause burst forth. Within a week’s time she received a telegram informing her that she had been selected for the film. The film, produced by Roy, was directed by Moni Bhattacharjee and starred Sunil Dutt and Nanda in lead roles. It was based on a renowned Hindi short story by Chandradhar Sharma Guleri which was published in 1915 in Saraswati. While the writing was critically acclaimed, the film did not have a smooth take-off and had a tepid response at the box office.
The Yash Chopra-directorial, Dharmputra (1961), directed by Yash Chopra was Indrani’s next. Based on a novel by Acharya Chatursen, the film depicted the Partition of India, and Hindu fundamentalism. Shashi Kapoor, who played the pivotal role of a Hindu fundamentalist, was Indrani’s first hero. The film was adjudged Best Feature Film in Hindi at the 9th National Film Awards. The sensitive war film Haqeeqat (1964) was her next big release. Directed by Chetan Anand, the film is based on the events of the 1962 Sino-Indian War about a small platoon of soldiers in Ladakh pitched against a much larger adversary. Indrani played a supporting role in the film, which was not only a representation of war, but a dramatic retelling of the impact war has on the common soldier. Filmmaker Chetan Anand went on to cast Indrani as the lead actress opposite debutant Rajesh Khanna in Aakhri Khat (1966). She played Lajjo, a village girl who is secretly married to Govind played by Rajesh Khanna, and who goes on to suffer the consequences. The film received critical acclaim, and was India’s entry for the Best Foreign Language Film at the Academy Awards.
The 70s saw Indrani become a regular feature in Hindi films, playing character actors in popular films such as Mere Lal (1966) in which the song Payal ki jhankar raste raste was picturised on her, Heer Raanjha (1970), Parvarish (1977) and Dharam Veer (1977), the Dharmendra starrer, in which she essayed the role of Rajmata, Apna Khoon (1978), and Lahu Ke Do Rang (1979). The following decade saw her feature in The Burning Train (1980), Gehrayee (1980), Aas Paas (1981), Fiffty Fiffty (1981), Ghamandee (1981), Chorni (1982), Rajput (1982), and Meraa Dost Meraa Dushman (1984). More recently, she was seen in Nirnayak (1997), and Aalo Chhaya (2014). She also acted in a few Marathi and Bhojpuri films, including Apradh (1979) in Marathi and Laagi Nahi Chhute Ram (1963) in Bhojpuri.
Among the famous songs picturised on Indrani Mukherjee were Tumhari zulf ke saaye, Bhool sakta hai bhala kaun yeh pyaari aankhen rang, and the evergreen Baharon mera jeevan bhi sawaro from Aakhri Khat, composed by Khayyam with lyrics by Kaifi Azmi.
On the personal front, Indrani married Krishanlal Khanna, and moved to Nashik outside Mumbai. The couple had four children, namely Anirudh Khanna, Dipankar Khanna, Deepanjali and Moyna. Indrani Mukherjee retired from the industry in the mid-80s, to take care of her children, and devote her time to social causes.