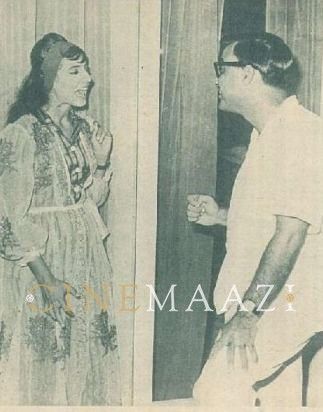 Born on 17 July, 1931, Suraj Prakash went on to become one of the most in demand directors in Hindi cinema after the tremendous success of Jab Jab Phool Khile (1965). He was an assistant director under Shakti Samanta in Bahu (1955). He began his career directing the Master Bhagwan-Shashikala starrer Beti (1957). He co-directed Asiatic Production’s Patang (1960) with Hargobind which starred Mala Sinha and Rajendra Kumar. He followed this up by directing Mehndi Lagi Mere Haath (1962) and Phool Bane Angaare (1963). His next film, Jab Jab Phool Khile (1965) starring Shashi Kapoor and Nanda became one of the biggest hits of the year. The film is remembered for its wonderful music composed by Kalyanji Anandji with lyrics by Anand Bakshi. Incidentally the then relatively unknown Laxmikant Pyarelal worked as assistants to Kalyanji Anandji in the film. The film also achieved tremendous success internationally, especially in North African countries like Algeria, Morocco and Libya. It enjoyed a particularly long run in Algeria. He also took a chance on Brij Katyal’s script after it had been turned down by several top producers. The film also provided a boost for Anand Bakshi’s career. After the success of this film he formed his own production banner Sight & Sound Movies.

The first film made under the banner was the 1967 mystery thriller Aamne Saamne starring Shashi Kapoor and Sharmila Tagore. His successful partnership with Shashi Kapoor continued with Juari (1968) and Raja Saab (1969). He attempted to start productions on a film called Sweetheart (starring Shashi Kapoor and Asha Parekh) under his banner, but for various reasons it remained incomplete. Two other films which remained incomplete were Seema (starring Meena Kumari, Rajesh Khanna and Mumtaz) and Jeevan Saathi (starring Nanda, Jeetendra and Shashikala).

The film under his home production was presented by his wife Harjeet Kaur. The two met when she used to work at the Handloom House Bombay. Kalyanji Anandji had provided the music for Sweetheart and the film is also fondly remembered by Asha Parekh.

He continued working in the 70s with the Shashi Kapoor-Vimi-Prem Chopra starrer Vachan (1974). He directed a film under Rajshri Productions’ banner – Jazbaat (1980) starring Raj Babbar and Zarina Wahab.  Some of his other films were Dard-E-Dil (1983) and Bahaar (1988)