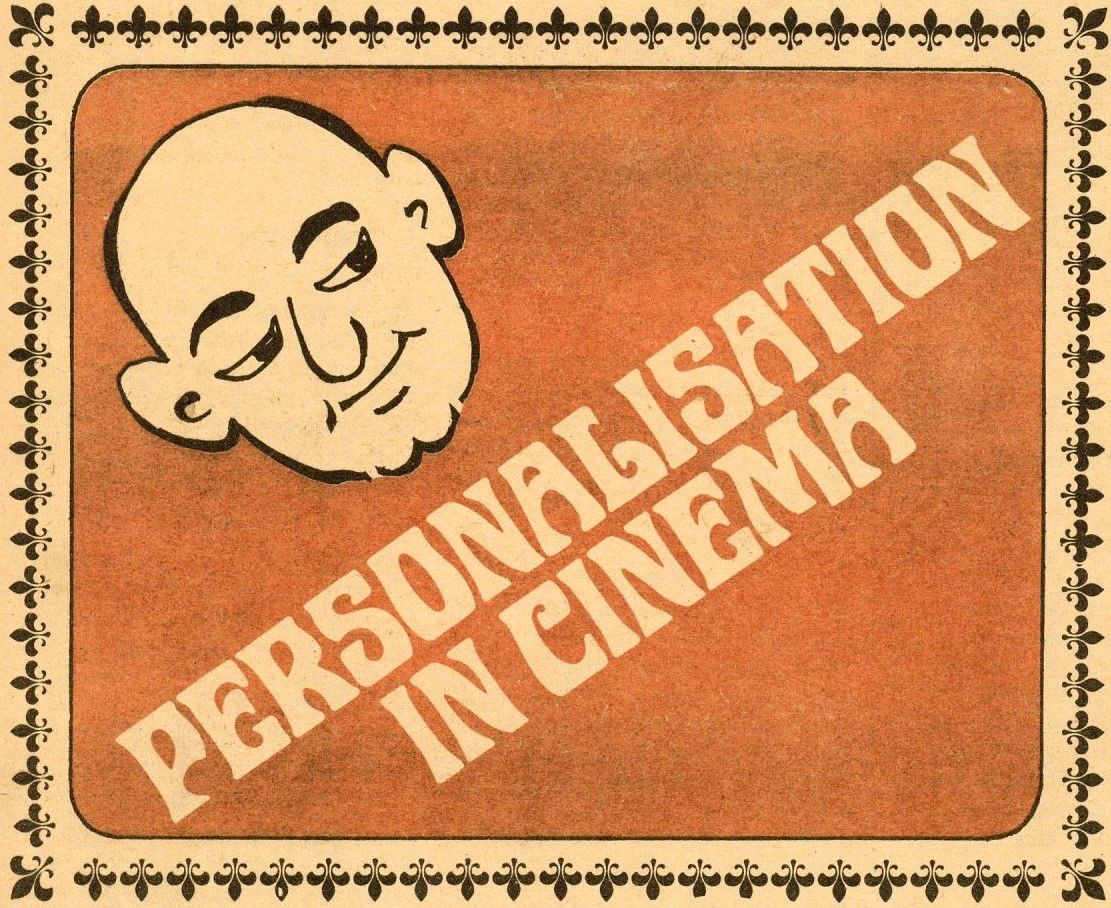 Image is taken from the original article

The transition of a film from mind to screen is like the course of a river which descends a watershed, traverses hilly tracts, enters plains, growing larger, deeper and faster and ultimately merging with the ocean. Those who want to make their films one-man creations, deny them the advantage of an intellectual and artistic combination.

Personalisation in cinema begins when one of the principal participants in the making of a film assumes responsibility for a department other than his own. This extends his own personal style and approach to the department he thus takes over and thereby the end-product bears the imprint of his majority participation. Cinema being a collaborative art, where vision of several persons coalesce into a single one, any majority participation is analogous to any one party owing majority shares in a corporate body.

In its present phase of development, cinema is a conglomeration of countless diversified skills only a glimpse of which is seen in the credit titles of a film. From the time the idea is conceived till the moment it is seen on the screen in the form of a motion of picture, no less than 200 arts and crafts and trades and skills go into the making of a film. The composite nature of the medium being so variegated, one has to depend on others to carry out one's own ideas. Paradoxically, at the same time, there is the need for a certain measure of centrality in the whole scheme. The producer performs this function in so far as the management side is concerned. On the artistic side, the director provides that focal point of guidance. In the case of this dichotomy, the producer's, as a rule, is the last word in managerial affairs while, on the floor, the director reigns supreme. Hollywood gives the producer a pride of place. The same is true of Sweden. In Russia, it is the director who holds the reins. Lately, in India and abroad, the two functions have been combined in one person. However, a producer-director combination by itself is no case of personalisation. But when an art director, editor, lyricist, actor or scriptwriter also acts as a director or a director begins to do the musical score himself, personalisation would then be in operation.

When the medium was in its infancy and had not evolved its own grammar, the pioneer film-maker were, of necessity, all rolled into one. George Belies, for instance, was the scenarist, art director and editor and director of his films, Charlie Chaplin personalised the cinema so much that in spite of whatever went into a film, it was Chaplin's own in every aspect. The story idea, its development into a scenerio, direction and enactment were all his own. This was the reason why he could emerge as the most celebrated of all film celebrities. When cinema evolved technologically and erratic line started appearing on the celluloid strip, bringing to the viewers all the voices raised and noises made before and behind the camera, one distinctly feels that the Chaplin monopoly weakened. Yet he managed to make "Lime Light," though with disastrous consequences. When he was last seen in "A Countess From Hongkong," which he scripted and directed, too, one could clearly see that the technological metamorphosis of the medium denied Chaplin a chance to own the film as completely as he used to do in the past.

Orson Welles, Jean Cocteau, Pabert, Carl Dreyer, Alexander Darzhenkor, Sergie Eisenstein, Ingmar Bergman, Akira Kurosawa, Paul Rotha, John Houston, Kamalel Sheikh (of Egypt), Osman (of Indonesia) and Fadil Hazic (of Yugoslavia), are also instances of personalisation with actor-director and writer-director combinations. Bergman also edits his own films (and edits them ruthlessly). In Europe, writer-director combination yielded excellent results. That is why the European film is more literary and intellectualised and less cinematic than the American film. The short story and the novel come closest to the film in structure and also in the treatment of characters and situations, the difference being that the motion picture frame is capable of abridged statement which is beyond the printed word. Since editing rhythm is built in a literary work, a writer becoming a director, too, is logical but director trying his hand at scripting is apprenticeship of doubtful utility. It is like an architect trying to do interior decoration. Often this extended participation is mere egoism of a person who has the chance of having his way through a film. In Hollywood, such excessiveness has paid off, as can be seen in director John Houston playing Pope in "The Cardinal" (and playing it well!). Or, Marlon Brando, that rare acting phenomenon of Hollywood, directing an exquisite film like "One Eyed Jacks." The Western cinema's greatest example of actor-director combination is Laurence Oliver, and amazingly contributive instance of personalisation.

Raj Kapoor, in Sangam (1964) and Mera Naam Joker (1970), Shantaram in Stree (1961) and subsequent films and Hrishikesh Mukerjee in all his films also grabbed the editing credit. Among script writer-directors are  Rajinder Singh Bedi, K.A. Abbas, Shahid Lateef(of Arzoo, 1950), Abrar Alvi (of , 1962), Satyajit Ray, I.S. Johar, Manoj Kumar, Kannada director S.R. Puttanna Kanagal (of Gejje Pooje, Sharapanjara, and Belli Moda). Cinematographers, too, like Bimal Roy (through he never grabbed the credit for photography) and the Malayalam director, A Vincent are instances of personalisation.
Some of our directors like Kamal Amrohi, Kidar Sharma, Nakshal and P. Bhaskaran (of Malayalam cinema) pen their own lyrics. Others have entrured to compose the music, too, like Satyajit Ray and Tapan Sinha.

Dilip Kumar and Kishore Kumar are in separate categories of their own. Though he got the story credit in Leader (1964), Gunga Jumna (1961) and Dil Diya Dard Liya (1966) and production credit in Gunga Jamna and Sagina (1974). Dilip Kumar, besides being an actor, is his own scenarist (and a good one at that) and director. In fact, he personalises a film a lot more than is acknowledged in the credits.

Kishore Kumar is the most extreme example of personalisation. In Door Gagan Ki Chhaon Mein (1964) and Door Ka Rahi (1971), he has stretched himself to a maximum point and in the process monopolised seven credits. The advertisement of the latter credits story, screen-play, dialogue, lead role, production, director and music to his lone Rahi. The only thing missing was: "and seen by himself."

The only time such a thing happened was when D.G. Phalke made Raja Harishchandra (1913). Phalke wrote the script, designed the costumes and sets, perforated the raw stock, exposed, processed and printed it, produced, directed, distributed and even projected the film himself. Should Indian films in 1971 stick to the practice of 1913.

Raj Kapoor's Mera Naam Joker suffered, for, its maker tried to make it a one-man creation with Raj Kapoor himself editing it. Be it Satyajit Ray or Dilip Kumar, Manoj Kumar or Kishore Sahu, any attempt to personalise a film is a negation of the very collaborative character of the film medium. The decline of Shantaram and Raj Kapoor or the progressive loss of vitality in Satyajit's art are a direct outcome of personalisation, which prevented specialist contribution from going into the configuration of their films. Bimal Roy and Meboob, wisely realised that while the director has an overall control, they did not have to magnify and superimpose themselves on a film. The trend towards increasing personalisation is a big threat not only to the Indian film but also to our noteworthy film-makers. Let them not spread themselves like a banyan tree under which nothing grows.

This article was originally published in Star & Style in the 21 January 1972 issue. It was written by Hameeduddin Mehmood. The song booklet covers used are from our archive and was not part of the original article.
313 views