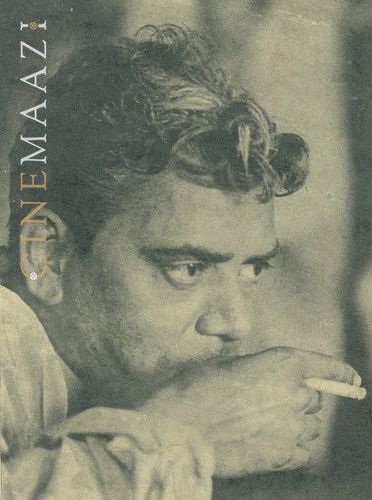 An image of Shailendra, the renowned lyricist, and poet. Image credit: Cinemaazi archive

A part of my soul has gone.

What a noble and selfless person he was, what a vital part of my being! Now he is gone forever, and all one can do is weep for him, cherish his memory.

Time rolls back. It takes me to those crucial years of the forties. Dreams were being dreamed. Ambitions were on the highway to fulfillment. I was making Aag (1948). We were at the Prithvi Theatres at Opera House, and just a stone's throw away at the I.P.T.A. office, was a fiery and idealistic young poet, a composition of whose I had admired. I was convinced that here was the only poet who could do justice to the theme song of Aag. I shall never forget the day I approached him, asked him to write it.

He was restless, contemptuous of the film medium, and asserted that his poetry was not for sale. "I am not interested in money!" he stated categorically.

I knew that to be true. He was working as a welder in G.I.P., now the Central Railway, and living in their tenements at Parel. He was keenly politics-conscious, an idealist. He had participated in the Civil Disobedience Movement of 1942 and gone to jail. Moreover, his study of the writings of Jawaharlal Nehru, M.N. Roy and his leanings towards the Marxist doctrines shaped in him and ideology that influenced his progressive writings.


I accepted his flat refusal, but continued to watch his work. After Aag we began Barsaat (1949). We had our office at the Famous Cine Laboratory at Mahaluxmi then.

One morning, Shailendra walked into our office, aggressively.

"I need five hundred rupees," he said. "In return, you can take what work you please from me."

I gave him the money - and a mukhda I had in mind: "barsaat mein hum se mile tum sajan, tum se mile ham."

It was when we worked together on this film that our relationship was born, and we each quickly found ourselves responding to the thoughts, aspirations and ideals of the other. From those days, to the day of his death, we have thought and felt in unison, vibrated on the same plane, each giving of our best to the other.

Now that he is gone the panorama of his greatness parades before my eyes. The popularity of Raj Kapoor in Soviet Russia and other foreign lands? Have people paused to consider how much it was contributed to by Shailendra through his simple and poignant lines of Awaara hun or of Mera joota hai Japani or Mere naam Raju gharana anaam or Hoton pe sachaai rehti hai, ham us desh ke waasi hain, jis desh men Ganga behti hai ?

The popular song Mera joota hai japani was penned by Shailendra for Raj Kapoor's film Shree 420 (1955)
It was Shailendra's keenness of perception that his initial contempt for the film medium soon changed into a tremendous regard for it, for he recognised that here was the common man's art form as effective as the poetry he wrote. And how well he functioned in it!

He brought the little man's colloquialisms, the little man's effective simplicity of speech, to the expression of the most profound thoughts. Who could say so effectively, for example: "Kuch log jo ziada jaante hain, insan ko kam pehchante hain?" (Jis Desh Men Ganga Behti Hai, 1960). You could "see" his poetry in terms of visuals, in terms of shots.

And in no small measure, it was Shailendra who was responsible for contributing so vitally to the creation of the image of Raj Kapoor, symbol of the common man. His songs, which grace all my films as well as the films of so many others, were all the essence of simplicity, yet more poignant and effective than the bombast of many poets.

Many of his close associates and friends at R.K. felt that Shailendra's most tragic mistake, and one which was perhaps ultimately responsible for his untimely death in the prime of youthful maturity, was his plunging into film production.
After reading all the opinions, Shailendra wrote in my diary - and I still have those lines with me - "I shall make this film as I like."
He was too trusting, blissfully ignorant of film business and finance, and soon got into hot waters. That the film Teesri Kasam (1966) was completed and released is in itself no small miracle and a tribute to close colleagues like Mukesh, Shankar and Jaikishan and others who stood by him.

But he made the film with integrity and poured some of his best poetry into it. I remember one night when we witnessed a private projection of the film at R.K. and thereafter, all present were invited to write down any suggestions they had to offer. The consensus of opinion was that it needed more of the conventional box-office ingredients thrust into it.

After reading all the opinions, Shailendra wrote in my diary - and I still have those lines with me - "I shall make this film as I like."

His financial involvements resulting out of Teesri Kasam harmed him immensely, made him stick in body and in soul. Yet, through it all, he wrote many haunting lyrics and three songs of Mera Naam Joker (1970) plus the opening verse of its theme song.

I had the first line for this, from years ago, with me, but could not nail him down to sit and proceed with it. Then one night he came to my "Cottage" and wrote the verse - and signed it.
And when he did that, when he put his signature at the bottom of the page, that meant it was final, it was good, it was unchangeable.

He never spoke a word in insincerity or in flattery. He was the most uncompromising critic of my work, during all stages of the making of my films. And so lovable he was, so utterly childlike, so simple and good.

This article was originally published in Star & Style magazine's 1 January 1967 issue.  Images used in the feature have been taken from the Cinemaazi archive, the original article and the internet.
413 views