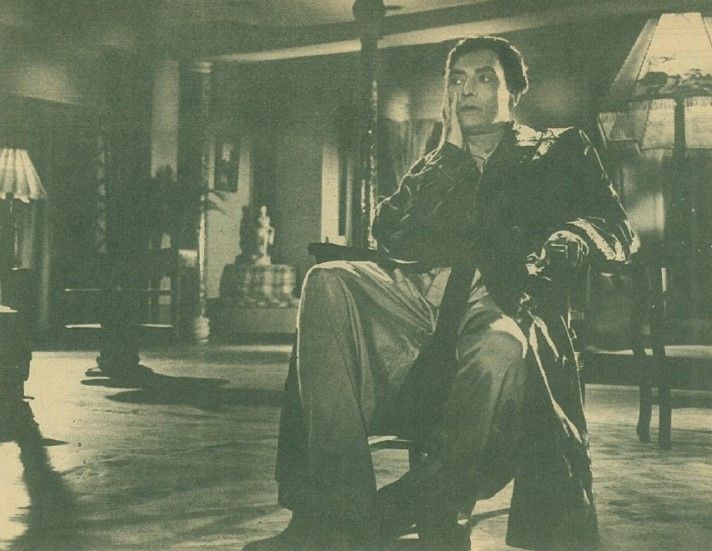 Writer, director, actor, painter, novelist, film-producer and what you will, the multi-faceted talent of Kishore Sahu has finely tempered with the years, with the result that today, where most film-makers would be content to rest on their laurels or else fade quietly into oblivion, Sahu continues to grow and move with the times.

Lean, acquiline and flint-eyed, Sahu looks today like some aristocrat of the Byzantine clan, the sort of regal Renaissance courtier-figure which adorned the paintings of the old Masters. The lean, agile look bespeaks a keenly tempered intelligence that is equally agile.

The secret of Kishore Sahu's success is that he has not allowed the years to generate age, but vitality. This is vividly characterised today in his relationship with his children, for example, who have grown into handsome and attractive teenagers.

To them, he is not the conventional, stuffy father-figure, but a companion more mature than themselves, a guide, director-philosopher and friend-notably friend.

This dynamic relationship is best illustrated in his handling of his own daughter Naina, whom he loves very much and on whom he has worked with loving care and a meticulous attention to histrionic detail, in fashioning her into a star. Sahu's customary "eye" for a heroine, which brought both Bina Rai and Asha Mathur to the fore stood him in good stead when he took a new look at his own daughter.

"You know," he said, ' 'when Naina left College and joined Nirmala Niketan, she used to stay there. Then one day she came home, and I saw her. It was as if I was seeing her for the first time! A stranger!"

That directorial sixth sense which is always vigilant in the most creative of directors shouted out to him at once—"There she is! There's the heroine of your new film!"

Sahu has always been active as a writer both in the ranks of Hindi literature as well as in films, and he is noted for his controversial writings. Among his books are Tesu ke Phool, a collection of short stories which has been translated into various other Indian languages; a historical novel Veer Kunai from his own script of that film; Abhisar a book of prose poems Shadi ya Dhakosla, one-act plays in Hindi; and many more besides his well-known films like Sindoor (1947), Kali Ghata (1951), Rimjhim (1949), and Raja (1943), all of which he wrote himself.

"When I saw Naina and realised she could well be my new star," Sahu confessed, "my imagination was excited, and I began to work on the story of Hare Kaanch ki Chooriyan (1967) almost immediately. You see, in a way, Naina was the inspiration for my story, too!" As a parent, Sahu revealed, he had taken his children for granted, as most parents tend to do. They are children, and there the matter ends. But then they started to grow up and in no time at all had become teen agers. "When they were kids,' Sahu said, "my children went to school next door. But when they grew up (one young man and two young ladies), they had to start moving out into the world to start meeting new people and undergoing new experiences. Suddenly I realised that I was responsible father, and I grew to constantly worrying about it!"

From here, the germ of the story idea grew in his mind to emerge as a highly dramatic, daring theme about young love and its consequences. Like all Sahu's best films, Hare Kaanch ki Chooriyan, too, has a daring controversial subject. It has moreover, passion and fire—a memorable subject which music surely emerge as a memorable film.

Kishore Sahu has always been the unconventialist. In 1939, he made his debut as hero opposite Devika Rani in Jeevan Prabhat and a year later produced his own film Bahurani (1940) after playing the leading role in Punar Milan (1940) he produced, directed, acted in and wrote his first straight comedy Kunwara Baap (1942), a film which was a runaway hit and  which placed Sahu among the front-rank directors.

Close on the heels of this success, Kishore Sahu made Raja (1943) which is even today considered a motion-picture classic. Raja was acclaimed by the critics all over India, and won the Best Story and Screenplay Award from the Bengal Film Journalists' Association in a year when Debaki Bose and P. C. Barua had their films in competition, too. That was in 1943, and for Raja, Sahu also won the All-India Film Journalists' Association Awards for story, direction and acting.

Subsequently in the same year, Sahu launched Shararat (1944) also written, produced, directed and acted by himself, and the following year he made an outstanding historical entitled Veer Kunal (1945) in which he played the title role, besides being the author, producer and director. This film won him a gold medal from the All-India Film Journalists' Association which declared it the best film of 1945.

But it is Sindoor (1947), remembered even today, which set the high watermark on Kishore Sahu as one of the most controversial talents of the Hindi screen. Written, produced and directed by himself, Sindoor starred Kishore Sahu opposite Shamim. The subject of Sindoor dealt with a noted Indian taboo—that of window re-marriage. As usual, before its release, the self-appointed cine-pundits predicted disaster—the subject was too daring to be accepted by the tradition-bound Indian mentality.

But contrary to all prognostications, Sindoor was a sensational success. For it, Sahu won the first Indian Oscar for the Best Direction from the C.I.M.P.A. and it was also the Best Picture Award choice by a noted film magazine of that time in conjunction with the I.M.P.P.A.

"But more gratifying than these awards," Sahu confesses, "were the many letters praising Sindoor which I received from all over the country! It had struck deeply home into the hearts of the people, and innumerable men wrote to me that after seeing this film they had dared to marry widows!"

Sawan Aya Re was a much-acclaimed film, too. One film magazine described it as "a school for directors", while a leading daily newspaper hailed it as the best film of the last twenty years and declared Sahu as the best actor of 1949. The film also won for Sahu the Dipali Motion Picture Award of Calcutta, and the Film Critics Motion Picture Award of Delhi as the best director of 1949. Other newspapers and periodicals also heaped honours and awards on Sahu for this film.

Apart from his own work, Sahu has also done notable work for others. His direction of Grahasti (1963) for Gemini a case in point, as well as his story and direction of Dil Apna Aur Preet Parai (1960). Discussing this film Sahu revealed that when he narrated the subject to its makers, they were fascinated, but when the film was ready and before its release, they predicted utter disaster, and wanted to re-shoot the whole thing!

A powerful scene from Kala Bazar where Kishore Sahu plays the lawyer defaming Dev Anand's character.
But Sahu backed his own judgment, and the film went on to become a silver jubilee!

All this adds up to a long career and a lot of achievement but the enthusiasm which Sahu has generated in making his latest Hare Kaanch ki Chooriyan is something quite exceptional. It took courage to cast his own daughter, fresh out of College, in the lead, but it was the courage of a conviction which made him do so without even taking a formal screen-test !

Add to that the fact that right away, the first time he made her face the he threw her into the thick of a highly dramatic and emotional scene, with which she stepped into the film— and you have a fair assessment of how unconventional Kishore Sahu can really be.

This article was originally published in Star & Style's 1 March 1967 issue. The images used in the feature are from Cinemaazi archive and were not part of the original article.
929 views