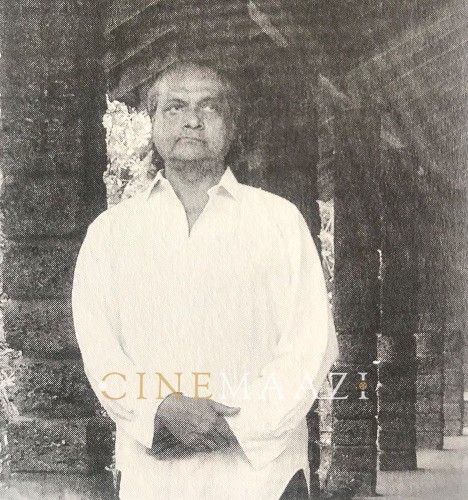 If the name Anthony Gonsalves instantly rings a bell, it’s mainly due to the popular My name is Anthony Gonsalves song Amitabh Bachchan rendered onscreen in Amar Akbar Anthony (1977). Not many are aware that the name was also a way for Pyarelal—of the Laxmikant-Pyarelal music director duo—to pay tribute to his musical guru, the real life Anthony Gonsalves. Considered to be Indian cinema’s first music arranger, he was a music composer as well as a music teacher. Starting off as a violinist with renowned music composer Naushad's group in 1943, he moved on to work with greats such as Anil Biswas, Ghulam Haidar, Shyam Sundar, Sachin Dev Burman, Ghulam Mohammed, Salil Chowdhury, Madan Mohan, and Laxmikant-Pyarelal, among others. Remembered for his musical arrangements in films like Mahal (1949), Dillagi (1949), Naya Daur (1957), and Pyaasa (1957), to name a few, he is also credited with founding an Indian symphony orchestra featuring Lata Mangeshkar and Manna Dey as soloists. In the mid-1960s, he made waves for blending the symphonies of his Goan heritage with the Hindustani melodies and rhythms which he discovered in the Hindi film studios of Bombay.

Born Anthony Prabhu Gonsalves on 12 June, 1927 in Goa’s Majorda village, his father, Jose Antonio Gonsalves, was choirmaster at the Mãe de Deus church. Showing an early talent for music, he soon absorbed his father’s lessons. Recognised as a child prodigy, he was appointed Choir Master at a local church at age 12. Travelling to Bombay in 1943, he was already a seasoned musician at 16. His first job in the city saw him employed as a violinist in the group of the composer Naushad in 1943. His more than apparent talent saw him soon graduating to doing arrangements for composers around the city. His fame also grew as a highly prized teacher.

Celebrated as Indian cinema’s first music arranger, he filtered and enhanced the somewhat crude way of recording music that was followed at the time. In the 1930s and 1940s, music directors such as RC Behl and Pankaj Mullick would build a tune around the lyrics. The musicians would then play the entire melody on their respective instruments. However, Gonsalves created a mathematical system of creating music in India, which came to be known as ‘arranging’ music. After the composer composed the basic tune, Gonsalves would create the interlude music, which means the music pieces between the paragraphs. He was the first to provide the ‘staff notations’ to the musicians and ask them to play only what was required. He thus refined the manner in which music would be played.

His tryst with cinema began with Ajit Shorey’s Dholak in 1951. There was no looking back as he went on to be in constant demand, shuttling between recording studios. In the course of his 20-year career, he arranged a whopping 1,000 songs approximately. A pioneer, yet he did not attempt to overpower the song with his arranging. Aware that his work, even if it included expertly controlling 50 violin players at a time, was more of a behind-the-scenes nature, he essayed it with quiet perfection.

Back in the day, his hard work and talent remained largely unsung when it came to the public eye. His first pay cheque was apparently just a couple of hundred rupees. What’s more, there was no credit on music records either. It was apparently Lata Mangeshkar who started the trend in the 1980s by insisting on acknowledgement of the arranger's contribution on music cassettes.

Interestingly, arranging was a western concept and was unheard of in India in those days. Goan Christians like Gonsalves knew it due to the Portuguese influence in Goa, as they had been meticulously trained in western classical music in the parish schools established by the Portuguese who had ruled their home state since 1510. As an arranger, Gonsalves was not merely an assistant to the music composer. At the music sitting (also known as baithak), when the director would indicate a song situation, the composer would build a relevant tune on his harmonium. The arranger would note down these pieces, which the composer would later build into a song. The arranger was also responsible for fine tuning the 'bridges' (the interlude music between two stanzas of a song) and often even composed the background music.

An artist who lived for art’s sake, he worked with most of the legendary music directors of Indian cinema, arranging music for nearly 400 films and 2000 songs between 1943 and 1965. Unlike many of his Goan peers, who were unable to grasp the lines of Hindustani tunes even though they could play them from a score, Gonsalves had developed a deep passion for raga-based music. Declaring it to be immensely rich, melodically and rhythmically, he would maintain that it struck him very hard in his heart and mind.

Every Sunday, his apartment at Linking Road Bandra would host several eager students, two of whom would go on to become significant composers themselves—namely, RD Burman and Pyarelal. The latter would acknowledge him as his guru and a music saint. Pyarelal was 14 when he went to Gonsalves, requesting him to teach him music, even though his own father was also a musician. He learnt Indian and western classical instruments from him for many years; Gonsalves never took any fees from him. From him he learnt the left hand and right hand technique of playing the violin. In time, Pyarelal would make his guru’s name widely famous. When the Laxmikant-Pyarelal duo was scoring the music for Amar Akbar Anthony (1977), he suggested to Manmohan Desai that the name of Amitabh Bachchan's character be changed from the original Anthony Fernandes to Anthony Gonsalves. Besides fitting into the meter of the popular title song, it was Pyarelal’s way of paying a tribute via the song to a man who was his guru and guide and to whom he owed a great deal.

Among the anecdotes surrounding him, one tells of the time Raj Kapoor called him to personally apologise for a misdemeanor. In Kapoor’s Shree 420 (1955) before the song Ghar aaya mera pardesi begins, there is a short violin piece played in high pitch. Gonsalves had been assigned the playing of this piece by music directors Shankar-Jaikishan. During the rehearsal, Kapoor happened to be passing by. He apparently berated him for the ‘noise’ being created. Gonsalves quietly packed his violin and left. Later, on learning that he had shouted at one of the finest violin players in the country, Kapoor was quick to make amends.

During the mid-1950s, he attempted to merge the symphonies of his Goan heritage with the Hindustani melodies and rhythms in films of the day. He christened his creations Sonatina Indiana, Concerto in Raag Sarang and Concerto for Violin and Orchestra in Todi Taal. In April 1958, he founded as well as funded the Indian Symphony Orchestra, a group of 110 musicians assembled specifically to perform his compositions. It was his way of showing the richness of his country’s music. Featuring playback singers Lata Mangeshkar and Manna Dey as soloists, the works were performed in the quadrangle of St. Xavier’s College. The music was not fusion but ragas scored by Gonsalves for an orchestra and choir. The concerts that followed boosted Gonsalves’ reputation and earned him a fellowship to New York a few years later.

At the height of his popularity, he departed to the US in 1965 on the invitation of Syracuse University, New York. His son Kiran and a daughter Laxmi were also born there. He also became a member of the American Society of Composers, Publishers and Authors. Returning after a decade, he did not let his former colleagues know of his return, and for some strange reason, chose to live in oblivion. Settling in his ancestral village, he continued composing music, though he never joined the Hindi film industry again.

Anthony Gonsalves passed away on 18 January, 2012. He was 84. Film historian Ashok Rane would make a documentary on him, titled Anthony Gonsalves — The Music Legend. In 2010, it was screened at the International Film Festival of India (IFFI) in his honour. His namesake also exists in Raj Comics by Tarunkumar Wahi, as a guitar player who devises a magical new sound known as ‘crownmusic’.