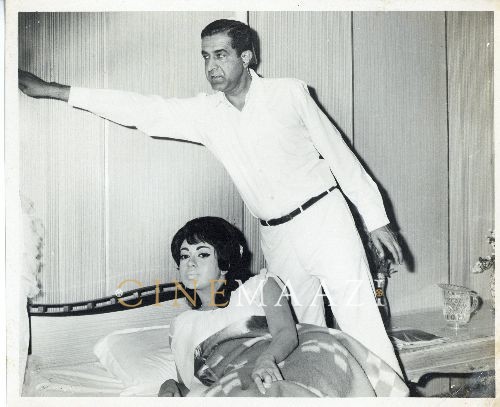 Director, producer and actor, Arjun Hingorani is regarded as a true mainstream filmmaker, well aware of the pulse of the audience. He is known for his directorials such as Kaun Kare Kurbanie (1991), Kab? Kyoon? Aur Kahan? (1970) and Kahani Kismat Ki (1973). He had a keen eye for talent and is credited with launching the career of popular star Dharmendra with Dil Bhi Tera Hum Bhi Tere in 1960; he had also directed actress Sadhana’s debut film, Abana (1958), which was India’s first major Sindhi-language production.

Born on 15 November, 1926 in Mathura, Hingorani went on to carve a career in film spanning 30 years. He collaborated with Dharmendra in several films including Kab? Kyun? Aur Kahaan? (1970), Kahani Kismat Ki (1973), Khel Khilari Ka (1977), Katilon Ke Kaatil (1981) and Kaun Kare Kurbanie (1991). A close friendship developed between Dharmendra and Hingorani. Not only did Dharmendra star in most of Hingorani’s films, but when Dharmendra opened his studio Sunny Super Sounds, Hingorani was the first one to make a booking at the studio.

His film Diwali Ki Raat (1956), which he co-directed with Dharam Kumar, starred Talat Mahmood, Roopmala and Shashikala Jawalkar, while his next, Abana (1958) was a Sindhi Language film created in the initial days of the Sindhi Hindu community having transitioned to India. It starred Sushil Kumar, Kaan Mohan and Sheila Ramani.

His directorial Dil Bhi Tera Hum Bhi Tere (1960) starred Balraj Sahni, Kumkum and Sushil and saw Dharmendra make his film debut. It told the tale of Panchu Kumtekar (Balraj Sahni) who lives a near-destitute lifestyle in Bombay along with his school-going brother, Shiri. He makes a living as a con-man, gambling and picking pockets with the help of another poverty-stricken male, Choti (Mohan Choti). He has a friend in Ashok (Dharmendra) who sells Cavendar cigarettes on busy streets by wearing stilts. One day, Ashok meets a maidservant, Sonu Mangeshkar (Kumkum), and they fall in love. Shiri is unable to pay his fees, and is expelled from school, but a local prostitute, Prema (Usha Kiran), comes to his assistance, much to the initial displeasure of Panchu. But he changes his mind eventually and accepts her help. In time, they fall in love and get married. Ashok is then employed as a boxer by Sonu's employer, and starts earning enough money to support them all, and even moves into a three bedroom apartment, while Panchu decides to become honest and finds work as a peon. Then their lives are shattered when Sonu's Goa-based dad falls ill and she goes to visit him via a ship, which sinks, killing everyone on board. Ashok, depressed and devastated, decides not to box anymore. Panchu decides to revert to stealing. He unknowingly extorts money from the mother of Police Inspector Moti, is subsequently arrested, and jailed. Prema gets run over by a horse-carriage, and Shiri takes to selling candy on trains, tries to escape from a ticket-checker, and falls off a running train. The film explores whether Prema and Shiri recover, and if their lifestyle improves.

His directorial Saheli (1965) starred Pradeep Kumar, Vijaya Choudhury, and Rajendranath Malhotra, while his 1970 film Kab? Kyoon? Aur Kahan? revolved around the story of an heiress who accidentally kills her uncle in self-defence and disposes of his corpse but is later haunted by his apparition. It starred Dharmendra, Babita and Pran.

Kahani Kismat Ki, his 1973 directorial, depicted the story of a thief who vows to go straight after one short prison term but severe monetary need forces him to commit a robbery on behalf of his employer, which leads to him being framed for a murder. The film’s cast comprised of Dharmendra, Rekha and Ajit.

The plot of his directorial Khel Khilari Ka (1977) revolved around Ajit, who, after watching his father, Masterji, getting killed; his sister, Laxmi, getting sexually assaulted by Sangram Singh, Dharamdas and Nandan, and then killing herself; and his younger brother, Munna, being thrown in a river, swears to avenge this during this lifetime. He starts by killing Nandan the very next day, and then absconding to Bombay, where he takes to crime with the help of Mohan. Years later Ajit has accumulated a lot of wealth through crime, is known as Rajasaab and also as Shaki Lutera. He still thirsts for revenge and does get a chance to kill the second of the three assailants, namely Dharamdas, but Sangram Singh continues to elude him. One day when his vehicle breaks down, a young man comes to fix it. Ajit notices that he has the same tattoo as his and is overjoyed to be reunited with his younger brother. Ajit does not know that the man claiming to be his brother is none other than Sangram Singh's only son, who wants to find out about Ajit's weaknesses and then ultimately kill him. The question remains where is the real Munna, and why has he not been found yet? The film’s cast included Dharmendra, Shabana Azmi and Dhruv.

His 1981 directorial Katilon Ke Kaatil starred Dharmendra, Rishi Kapoor and Zeenat Aman, while Kaun Kare Kurbanie (1991) starred Dharmendra, Govinda and Anita Raj. The latter revolved around Inspector Arjun Singh, who, after his transfer from Delhi, lives in Bombay along with his wife, Anita, school-going son, Munna; and a younger collegian brother, Ajit. Arjun is disappointed with Ajit as he spends most of his time singing, dancing and flirting. Then a series of sexual molestations and killings of attractive bikini-clad young women take place, and Arjun is assigned to this case. After a short period of time, his investigations lead him to a wealthy suspect, but when the suspect's daughter is molested and killed, his department gets evidence that may implicate another suspect - none other than Ajit.

Hingorani was also seen onscreen playing roles in a few of his films such as in Kab? Kyoon? Aur Kahaan? (1970). He essayed the main villain in Kaun Kare Kurbanie (1991). Seen to have a penchant for featuring the letter ‘K’ in the titles of his films, Hingorani’s last produced film was Kaise Kahoon Ke...Pyaar Hai (2003), while Kaun Kare Kurbanie was his last film as director in 1991.

In 2005, he had also penned the self-help book How To Be Happy and Realise Your Dreams.