There is divinity that shapes our ends, rough-hew them how we will........

Vikramjeet Singh alias Vicky is a notorious criminal with a prize on his head. If the police has failed to nab him and bring him to the book, it's because they are neither aware of his real identity nor the whereabouts of his gang as he lives in his own under-world with a group of well-equipped, well-armed and well-trained people lined behind him. Besides he himself is a full-blooded dare-devil and more than a match for the law.

But, as they say, there's a tide in the affairs of man. Soon a time comes when with the help of Neera, Vicky's secretary and confidence, a young C.B.I. officer named Kumar Sahni succeeds in overthrowing Vicky's 'crime' empire and makes him run for his life.

It's at this point when the police is hot on his heels and he is desperately looking for some straw to clutch on and save him from the noose of the police, that Vicky stumbles upon a godman who not only gives him refuge but also accepts him in his fold and induces a change in his 'Krodhi' attitude towards the world. Suddenly Vicky awakens to a new world of selfless service and love...love that had departed from his life with the cruel and tragic death of Aarti, the girl on whom he had set his youthful affections once upon a dream.

Vicky now realises that his salvation lies not in killing but in healing, not in destroying but giving a new hope to the poor and the down-trodden. The life he had lived after the death of Aarti was only a nightmare, an illusion which had no relevance to the truth. It was in fact an offshoot of his 'Krodh' and like the fury of a thunderstorm which gets deflated when it over-runs its course. The divine illumination inspires him to work ceaselessly for the betterment of the people whom he had considered his enemies only a night before.

However, there are devils like Jagira, the ruthless dacoit of the region to whom Vicky's transformation is a hoax and a great betrayal as both of them had earlier made a deal to divest the town's temple of its wealth.

Then there is also Kumar Sahni, the C.B.I. officer, who has not completely reconciled to the disappearance of Vicky and is still gunning for him.

The story takes a further turn when the police arrives at the village to arrest Vicky, but is prevented by the people of the town who have now come to regard him as a saint and their saviour...and a Messiah !

The story takes a further turn when Jagira also jumps into the melee to settle old scores with Vicky and rob the temple of its riches. 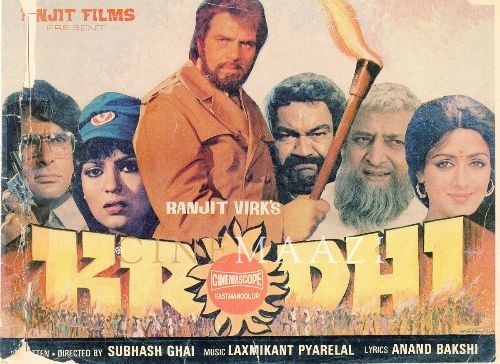