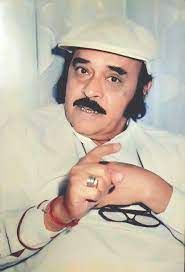 Film producer, director, and screenwriter active in the 1970s and 1980s, Sultan Ahmed was known for his preference for the dacoit genre of films as seen in his productions Heera (1973), Ganga Ki Saugandh (1978), which starred Amitabh Bachchan, Rekha and Amjad Khan and Daata (1989). Other films he produced and directed include Dharam Kanta (1982), Reyasat (1993), and Jai Vikraanta (1995).

Born in 1938 in Lucknow, he hailed from a respectable family of landlords. His family was inclined towards the literary arts, with his grandfather being a famous Persian poet, and his father also being a man of letters. Sultan's paternal uncle, Wajahat Mirza was also the writer of one of the greatest Hindi films, Mughal-e-Azam (1960).

Sultan Ahmed started his career in films as chief assistant to director K Asif on the Dilip Kumar-Madhubala starrer Mughal-e-Azam. He also assisted K Asif on his unfinished films such as Sasta Khoon Mehenga Paani (1974) and Love and God (1986). Ahmed made his directorial debut with Heera (1973). His fascination with dacoits became apparent, as he produced and directed films set in similar scenarios, such as Heera (1973), Ganga Ki Saugandh (1978), and Daata (1989), the screenplay of which he also penned.

His debut directorial Heera featured Sunil Dutt, Shatrughan Sinha and Asha Parekh. The music was scored by Kalyanji-Anandji. The film was declared a silver jubilee at the box office, and ranked 9th among the top grossers of 1973.

After this film, Sultan Ahmed directed Pyar Ka Rishta (1973) for producer Tony Walker. Starring Vinod Khanna, Shatrughan Sinha and Mumtaz in pivotal roles, it dwelt on misunderstandings between siblings and their progeny.

Sultan signed up Amitabh Bachchan and Rekha for Ganga Ki Saugand. The movie, which released in 1978, explored the subject of untouchability. It became a box-office hit. The biggest box office hit delivered by Sultan Ahmed was Dharm Kanta (1982). Starring Raaj Kumar, Rajesh Khanna and Jeetendra in the lead, it dwelt on the life of a reformed dacoit, Thakur Bhavani Singh. A multi-starrer entertainer, it was a lost-and-found formula drama.

In 1989, Sultan Ahmed directed Daata starring Mithun Chakraborty, Padmini Kolhapure and Shammi Kapoor. This action-drama performed averagely at the box office in big cities, but in small cities and in north India, it was a big hit. It was the fifth highest-grossing movie of 1989. Daata also remains one of Mithun Chakraborty’s best performances.

In 1995, Ahmed’s Sanjay Dutt starrer Jai Vikraanta released. An action crime drama, it also starred Zeba Bakhtiyar and Amrish Puri. The film revolved around Vikraanta who vows to avenge the death of his father, a model farmer, thus placing his own life in jeopardy. The film had music by Anand-Milind.

Among the awards Sultan Ahmed received, the first was for his film Heera. He was honoured by the Uttar Pradesh Film Journalist Association (U.P.F.J.A.) in 1973. Later in 1979, he received a certificate of merit for Ganga Ki Saugand from Tashkent, Russia. He was also awarded the K Asif Memorial Award for "Big Thinking" by the Bombay Film Awards Association for the year 1982 – 83. The President of India, Gyani Zail Singh also presented him the Punjabi Kala Sangam award for Daata.

A stalwart of the film industry, Sultan Ahmed served the Indian Motion Picture Producers Association (IMPPA) as Senior Vice-President. He was later elected unanimously as President of IMPPA for the years 1994 to 1998.

Sultan Ahmed passed away on 22 May, 2002 while he was in Tehran, on a pilgrimage tour to Iraq and Iran in 2002. He is survived by two sons Ali Akbar Ahmed, Ali Abbas Ahmed and wife Farah Deeba. He was previously married to actress Shammi; the marriage had ended in divorce after 7 years.