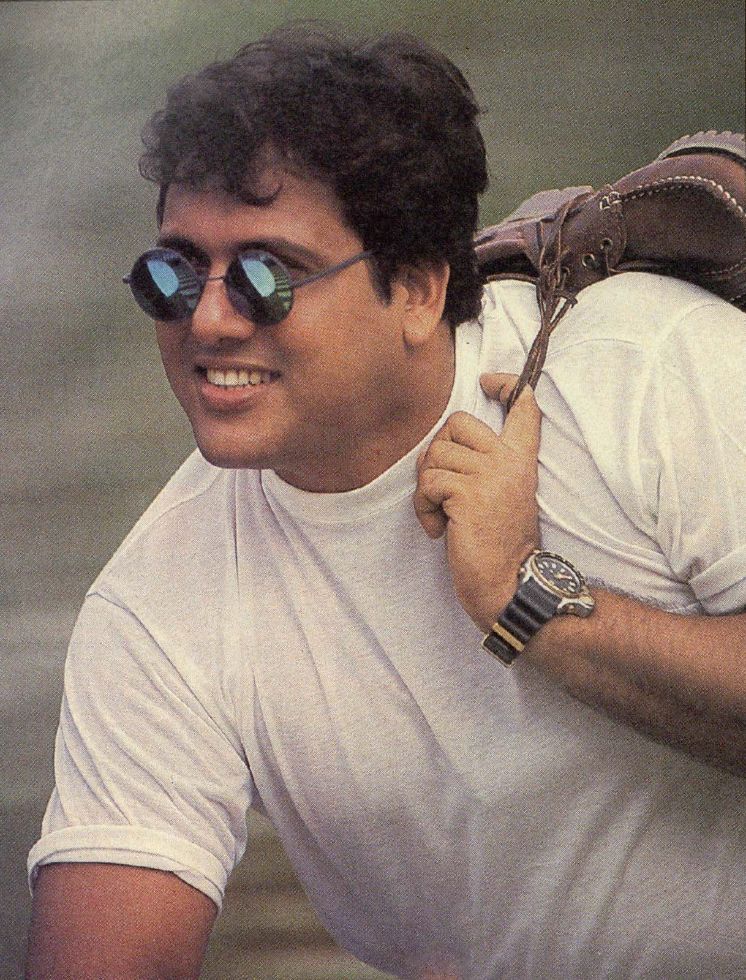 Those whom the gods wish to destroy they first bless with great gifts. No one in their right minds would have given Govinda half a shot at superstardom. Even the actor himself wouldn’t have believed it with his debut film, Love ’86 (1986), which would lay the foundation of a career that would outlive and outshine the other three, viz. Rohan Kapoor, Farah Naaz and Neelam, who shared the screen with him. In fact, Govinda’s mentor Pahalaj Nihalani did not recast him after the runaway success of Ilzaam (1986) and felt that his other ‘discovery’ Chunky Pandey was more of star material. Not only did Govinda go on to become a bonafide superstar but in many ways, he was also the last of the superstars to grace Hindi cinema. Although he might not have seen the kind of success that he was once used to in the last two decades, every time there is a new Govinda film on the anvil, memories of yesteryears get refreshed and irrespective of how the upcoming FryDay fares, Govinda continues to bring a smile.

However, where Govinda differed from not just Dharmendra but also the rest of the lot was his flair for comedy and this was something that would take Govinda to the next level and beyond.
Govinda is the only star who delivered a monster hit throughout the 1990s and in fact, his success ratio at the box office would probably be better than most of his contemporaries including the three Khans, Akshay Kumar, Sunny Deol and Ajay Devgan. In his initial years, Govinda struggled to carve a niche for himself but even with some success, he found it difficult to rise above the supporting actor tag or shrug off the tag of a poor man’s Mithun Chakraborty that got stuck thanks to his dancing adeptness. He even produced a film for himself where he would get to showcase his ability to emote along with his already popular nimbleness. But even with the success of Hatya (1988), he was far from being seen as a star in the true sense of the word. He had already co-starred with most of his contemporaries and stood out  irrespective of whom he shared space with - Sanjay Dutt (Jeete Hai Shaan Se [1988], Do Qaidi [1989]), Anil Kapoor (Awaargi [1990]), as well the senior lot Jeetendra (Sadaa Suhagan [1986], Sindoor [1987], Khudgarz [1987]), Asmaan Se Ooncha [1989]), Rishi Kapoor (Ghar Ghar Ki Kahani [1988]), Shatrughan Sinha (Ilzaam, Khudgarz [1987], Shiv-Shakti [1988], Billoo Badshah [1989]), Vinod Khanna (Maha-Sangram [1990]), Rajesh Khanna (Paap Ka Anth [1989], Swarg [1990]), Dharmendra (Paap Ko Jalaa Kar Raakh Kar Doonga [1988], Saachai Ki Taqat [1989]), Sridevi (Gair Kanooni [1989]) and Dilip Kumar (Izzatdaar [1990]). While he enjoyed a healthy number of solo films, he was still far from being considered a superstar.

Govinda made more news for signing more than 30 films in a matter of days and he was constantly working three-shifts to the extent of exhaustion. The one good thing that came out of the nearly 50 films that he did within four years was that he was beginning to be labelled a complete actor and interestingly enough, both trade, as well as audiences, had started comparing him to Dharmendra. While initially, it didn’t seem clear but if one were to scratch beneath the surface, it is more than evident that Govinda could have, in fact, modelled his career on Dharmendra’s. Govinda’s flair for picking up roles and delivering his performances with the ease with which he managed displays an affinity to how an early Dharmendra executed his roles. While most of the younger lot were busy trying to fill the space that Bachchan occupied, none seemed too keen on emulating Dharmendra, save Govinda. However, where Govinda differed from not just Dharmendra but also the rest of the lot was his flair for comedy and this was something that would take Govinda to the next level and beyond.

At the onset of the 1990s, popular Hindi cinema appeared to be at a loss of direction. The end of the 1980s saw the arrival of Aamir and Salman Khan, who ensured that the next superstar would be from their generation and not the lot that was poised to replace Amitabh Bachchan — Anil Kapoor, Jackie Shroff, Sanjay Dutt, and Sunny Deol. But before the Khans (Aamir, Salman, and Shah Rukh) and Akshay Kumar could display their range beyond the romance and action, there was a lull for a bit. The younger lot had not come into their own and the previous generation was finding it difficult to go beyond their core audience and it was here that comedy played a great role. It is often said that unless any actor excelled at comedy, they couldn’t become true superstars in Indian cinema, especially in Hindi and Tamil. Looking at the manner in which Amitabh Bachchan’s trajectory changed post-Hera Pheri (1976), Amar Akbar Anthony (1977), Khoon Pasina (1977), and Don (1978), one can say that there is some degree of truth in that criteria. Compare how Kamal Haasan edged past everyone else, ditto Sridevi and later Kangana Ranaut with Tanu Weds Manu (2011) or Queen (2013).

Beginning with Shola Aur Shabnam (1992), Govinda used his comic timing to separate himself from the rest and changed the perception that people had of him. This was his third film with David Dhawan after Taaqatwar (1989) and Swarg but it was with Shola Aur Shabnam that the two found their groove and the next film that they did together, Aankhen (1994) changed it all. One of the biggest hits of the 1990s, Aankhen laid to rest all doubts about Govinda’s star worth and unlike the other directors that he had previously worked with, Dhawan knew what buttons to press and together they became one of the most successful partnerships in Hindi cinema.

The David Dhawan-Govinda combination reminded people of the typical Manmohan Desai-Amitabh Bachchan films that didn’t care for anything as long as they entertained. Many of their films bordered on crassness and being politically incorrect but their runaway success not only quelled most criticism but also created a sub-genre where everything was allowed. Interestingly enough, the period between 1993 and 1999 was also the time when Bachchan was in the wilderness, which included a self-imposed sabbatical. Sanjay Dutt had gotten embroiled in the 1993 Bombay serial blasts, and although the three Khans enjoyed some of the biggest commercials hits of their careers (Hum Aapke Hai Kaun [1994], Dilwale Dulhaniya Le Jayenge [1995], Raja Hindustani [1996]) and featured in some of their most definitive works (Jo Jeeta Wohi Sikandar [1994], Rangeela [1995], Darr [1993], Baazigar[1993], Karan Arjun [1995], they were still not the colossuses that they would eventually come to be recognised as.

Govinda and Kader Khan,two of Hindi cinema's popular faces for comedy in the 90s,  are seen in a funny sequence from Dulhe Raja
The thing that brought about an unexpected change in Govinda’s fortunes was the sense of class disparity that had begun seeping in with Aditya Chopra’s Dilwale Dulhaniya Le Jayenge and divided Hindi films into segments. No matter how towering Govinda’s successes, he rarely got true mainstream affirmation. He and Dhawan even made it to the cover of India Today, which back then meant a lot but the seemingly classist barbs continued to come his way. Even with hits such as Raja Babu (1994), Coolie No. 1 (1995), Saajan Chale Sasural (1996), Hero No. 1 (1997) and Deewana Mastana (1997), he was never addressed as the number one star. He surpassed Bachchan, who on a comeback spree literally played the second-fiddle to Govinda in Bade Miyaan Chote Miyaan (1998) but despite the film being one of the top money spinners of the year, nothing changed in terms of Govinda’s status. The same year Govinda also had a smash hit in Dulhe Raja (1998), which continues to enjoy a near-cult status but the writing on the wall was clear.

Govinda rarely learnt from his past mistakes. He continued to sign films that he should have refused and refused films such as Taal (1999) — he was supposedly offered Anil Kapoor’s role — that could have laid the foundation of his next phase. He continued to report late for shoots and couldn’t look beyond the conventional when it came to characters. He carried on doing his kind of films, which in other words meant a parallel industry like the one Mithun Chakraborty was known for in the 1990s and one that would ultimately push him away from the mainstream. Today, Govinda seems so far removed from the typical Hindi entertainer that he was once the poster boy of that he is barely recognisable. But like all things great about cinema and its icons, we shall always have the memories.

This article was originally published in Firstpost on 11 October 2018. The images used in the feature are not taken from the original article and are taken from the internet.
580 views