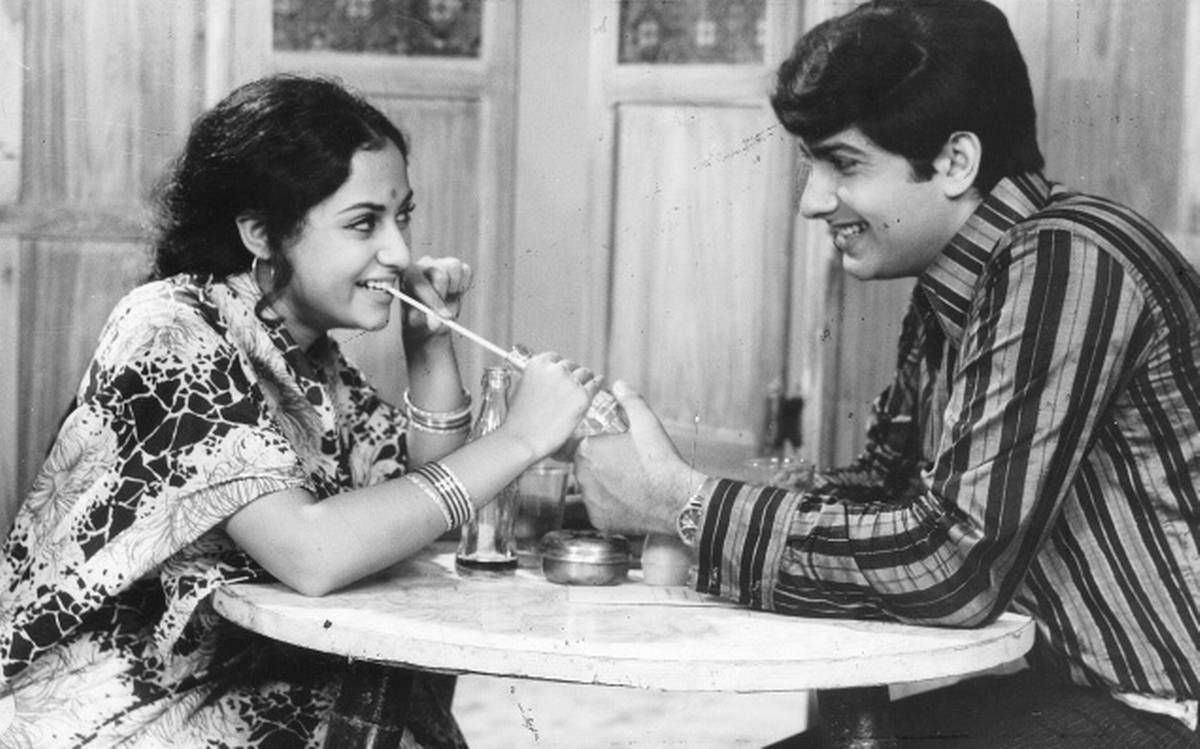 A Sunday afternoon, as a child, was only complete with the matinee show we watched together as a family on the TV. Most often the films that played at the hour were the sappy family dramas, meant to be a complete entertainment package. Romance between the hero and heroine, some tension in the family, a whole lot of drama with lots of tears, laughter and occasionally a few action scenes added for the thriller enthusiasts made these films extremely popular with its audience. If one takes away the glitter from the films, it’s always a simple tale of the obstacles the families on screen went through.

Family is a place of belonging, a feeling of safety, a feeling of comfort everyone desires to return to at the end of the day. This means, we seldom think of it as an institution. Family governs an individual’s moral conduct in society as per the existing hierarchies that are legitimised through practiced traditions. The onset of “modern” (read: western) changes that supposedly threaten the family structure have always loomed over the Indian society, even before liberalisation occurred. Like any social phenomena that has a ripple effect in unthinkable ways, when India went through liberalisation in 1991 it refashioned the social fabric of daily life. Apart from a free market influx of MNCs, the Indian family system also went through the inevitable change fate awaited it. But these rifts and tensions did not appear with liberalisation, they had been present for decades prior. Popular Hindi cinema has in a range of ways depicted the tension our society underwent across decades. In this essay, I will look at a few notable family dramas from the 70s till the present times, attempt to map the changes they undergo.

Dowry, a recurring topic in most of the films, is denounced in the narratives, but it acknowledges the prevailing practice in society. The concern for a bride to bring in dowry is attached to the class she belongs to. In films such as Biwi Ho Toh Aisi (J.K. Bihari, 1988) Rekha’s character marries rich without dowry, despite not belonging to the upper class herself, and meets with ill treatment from her mother-in-law (Bindu). The twist in the story is revealed when her character turns out to be an Oxford alumnus and was in cahoots with father-in-law (Kader Khan) to straighten her mother-in-law out.
When it comes to the genre, T. Rama Rao’s Sansar is one of the stand-out films in terms of the narrative and the interesting plot-points. An argument over finances occur between Vijay (Raj Babbar) the eldest son and his father Deendayal (Anupam Kher). Their argument separates the family while living under the same roof. Vijay’s wife Uma (Rekha) manages to reconcile the family with the help of other members. In the sub-plot, Rajni (Archana Joglekar), the daughter of the house, also causes tension in the family by going against her father to marry her Christian lover (Shekhar Suman). The happy ending that Sansar serves its audience is one of coming to terms with the changing times - Uma and Vijay decide to move out of the household as it is better to maintain harmony in the relationship while living separately than to bicker and hold grudges under the same roof. The anxiety of the disintegrating family stems from losing the Hindu moral values the family structure inculcates and propagates in society. Clearly a hierarchical structure of power, the traditions of upper caste Hindus are safeguarded within the joint family system.  In response to the lack of representation of other communities in the genre, emerged the Muslim Social. It replicated similar tropes of family dramas, except within a world created with markers that are distinctly associated with Islamic culture and only Muslim characters. The patriarchal and hierarchical system existed within the Muslim social too, where the women were at the mercy of the men in her life.

Apart from the spectacle of wealth in the film, one can also see individuality, to a certain extent, attached to Rahul’s character. Yet, the tradition that is crucial to the crux of the plot, which puts the parents on a god-like pedestal, requires him to not just reunite with the family, but also retain a hierarchical power in his household in London. Rahul as a patriarch of the household like his father is mostly relaxed except with his sister-in-law Pooja’s (Kareena Kapoor Khan) clothing choices. The women will always be governed by the male patriarch to regulate their ethical conduct in society.
In both the films, the special status of the adopted child highlights the primary status blood relation takes in upholding the so-called Hindu family values. It is implicit that blood relations supersede alternative forms of constituting a family.
Kabhi Khushi Kabhie Gham raises the question of the role blood relation plays in constituting a family. A similar concern is raised in another Bachchan film Baghban (Ravi Chopra, 2003). After retiring, an older couple Raj (Amitabh Bachchan) and Pooja Malhotra (Hema Malini) are separated by their children who take them in their custody separately for six months. The children and their spouses’ dismissive and brusque treatments are too painful to bear for both of them; on top of that, they are also yearning for the comfort of each other’s company. They finally find love and care from their adopted son Alok (Salman Khan) later in the film. An attempt to depict filial love and adoption positively, yet the film somehow carries the trace of exclusivity. The adopted son is still seen with a different lens, a special status. This can also be seen in Avtaar (Mohan Kumar, 1983) and later in Swarg (David Dhawan, 1990).

In both the films, the special status of the adopted child highlights the primary status blood relation takes in upholding the so-called Hindu family values. It is implicit that blood relations supersede alternative forms of constituting a family. LGBTQ+ discourse has shown us different forms of families with individuals that are not blood related but form on the basis of a support system, yet the assumed legal papers deny the adopted characters in these films the inclusivity of a family. (It is interesting to note that Karan Johar is now himself a father to two children conceived through surrogacy.)

A recurring thematic element which appears throughout these films is the representation of the upper caste, upper class Hindu family. Apart from a few, such as Piya Ke Ghar and Sansar, a majority of the families live in lavish houses, which doesn’t suffocate their personal space which can be very likely in a joint family.

The couple, a main ingredient of the family drama, is depicted differently in comparison with other romance films. Of course, amidst all these family dramas, from the beginning lies the romantic love story of the couples. But what's interesting is, the couple is consumed within the family system in these films. Take for instance, Hum Aapke Hain Koun...! where Rajesh (Monish Bahl) and Pooja’s (Renuka Shahane) union was a blend of arranged cum love marriage - a perfect middle ground achieved by the film. After Pooja’s death, Nisha almost gets married to Rajesh sacrificing her love for Prem is the epitome of how the couple’s romance carries the shadow of the family.
While most of the coital couples in family dramas have had arranged marriages, and their relationship is seen through the lenses of a household and influences of other members, post liberalisation film characters have love marriages. The tiny jump from arranged to love marriage was directly connected to the power dynamics within the family and the shift in moral values. The women in these films are the binding force in the family while also playing one half of the romantic pair. Usually associated with the compromising, understanding and forgiving leading lady, Karan Johar changes the game with Kabhi Alvida Naa Kehna (2006). Although it’s not classified as a family drama immediately, one can claim to see it within the same category for a couple of reasons. Firstly, the film deals with Dev (Shah Rukh Khan) and Maya's (Rani Mukherjee) adulterous relationship, in which their families are entangled. Both Dev and Maya's spouses-- Rhea (Preeti Zinta) and Rishi (Abhishek Bachchan) - also collaborate professionally. There's an overcast of the other family members - spouses, children, parent and in-laws in their relationship throughout their romance.

The tiny jump from arranged to love marriage was directly connected to the power dynamics within the family and the shift in moral values.
Maybe due to the setting of the film in a city like New York which represents the epitome of western modernity, the couple’s decisions and desires are not mediated by the familial logic of earlier films. The most interesting part is the change in the concept of the happy ending - for all the previous films, the families reunite despite abuse and unbearable treatment/behaviour. In KANK, the adulterous couple end up together after being divorced by their respective partners. Perhaps, it emulates modernity that was highly inspired from its location, or it was a depiction of a slight shift in the moral values of a upper class Hindu family on screen that would appeal to both the NRI and home audience.

The trend of family dramas in mainstream Hindi cinema has continued with more or less the same anchor to hold onto - an upper caste North Indian family. But there have been changes too, the shift in focus in terms of class is interesting to note, with a lot of new family dramas based on the middle class. A lot of them wouldn’t be put under the category of family drama but instead romance, but genre is anything but rigid, and always an evolving idea. In Kapoor & Sons (Shakun Batra, 2016) the story of a dysfunctional family has an allegiance to similar elements from the older generation of family drama, but is made in a different model. The suspicions of the mother (Ratna Pathak) of an adulterous father (Rajat Kapoor) creates a lot of hair-splitting coupled with the underlying conflict between the two brothers (Fawad Khan and Siddharth Malhotra).  The model of the joint family has changed, but carries forward a strain of the similar elements of drama.  With the recent release of Shubh Mangal Zyada Saavdhan (2020) that navigates a homosexual couple’s acceptance by the family –especially the patriarchs. It is apparent from this that societal ethics is still mediated through earlier familial codes, although the fractures in them grow more perceptible every day.