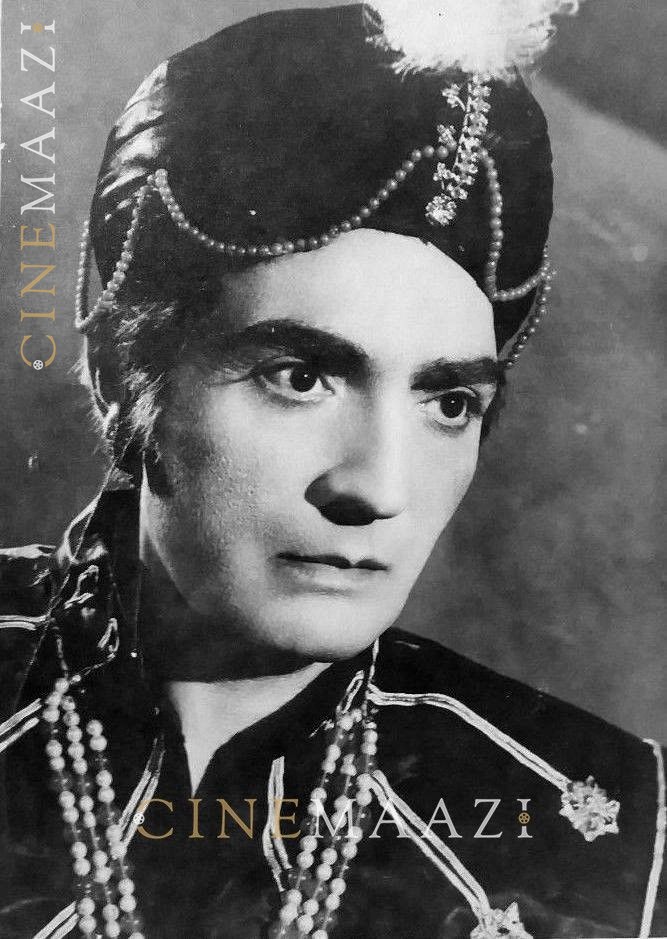 The gallery of the most memorable villains in the history of Indian cinema will be incomplete without the addition of Hiralal. Hiralal usually appeared onscreen in various shades of evil, often playing an evil Wazir/ despot, a lascivious man with designs on the heroine, or the chief of a gang of criminals. Yet the talented actor was so much more than that.

According to popular gossip, Hiralal harboured the desire to play the villain since a very young age when he first attended a theatre performance during Ramleela. Unlike other children who dream of being a hero, Hiralal’s hopes were fulfilled and how! Hiralal Thakur became a villain of such magnitude that entire audiences would leap to their feet when he appeared on screen, larger than life, armed with his booming voice. He pursued his dreams of acting immediately after clearing his intermediate exams.

Hiralal has been through some of the major milestones of Indian cinema- from the transition from silent to talkie and later to colour films. Many historically significant films have been part of his filmography. In 1928, he entered the film world with the release of Daughters of Today which laid the foundation for the eventual Lollywood industry based in Lahore. The film also starred Shankardev Arya who went on to become a key player in the industry later on. Although Daughters of Today happened to be his debut film, it was A R Kardar’s stunt film Safdar Jung (1930) that can be said to have kickstarted his acting career.

When A R Kardar and M Ismail established their studio -United Players Corporation, Hiralal signed a contract with them and starred in several of their silent era productions such as Pavitra Ganga (1932), Seeta (1934), and Blood Feud / Josh-e-Inteqam (1935).

Early on in his career, he was cast to play a bald one-eyed character in the 1931 film Wandering Dancer, for which he shaved his head to portray an authentic character. His commitment to portraying a character genuinely required him to sacrifice his hair a few more times in his long career.

In 1930, the silent stunt film The Shepherd, also known as Farebi Shahzada directed by Kardar, showcased a star-studded cast of Gul Hamid, Gulzar, M Ismail along with Hiralal. The two shared a long collaborative alliance that began in the inception of Hiralal's career.

Hiralal was part of Debaki Bose's mythological film Seeta (1934) starring Prithviraj Kapoor who played Ram and Durga Khote who played Seeta. The film boasts of being the first Indian film that was screened in the Venice Film Festival and was widely appreciated by international audiences for its masterful storytelling. Unfortunately, there are no surviving prints of this hugely successful film. His performance in Din-o-Duniya (1936) as General Mohammad Tariq enchanted the viewers. Hiralal's bravura performance left audiences in raptures. The theatre company had to present Hiralal before the audience to calm them down. His performance in the film also garnered some public appreciation from the Prince of Sarawat.

Hiralal and Kardar, one of his frequent collaborators, had gone through several transitions together and one such was the move to Calcutta. In his time in Calcutta when he was a part of New Theatres, he had the good fortune to work in association with filmmaker Hemchandra Chunder on several occasions. He believed he became a real actor under the influence of Chunder.  In 1943, they worked together in Wapas for the first time which was followed by Meri Bahen(1944) where Hiralal played the character called Nayab. They further worked together in O Janewala (1948), Oonch Neech (1948), and Teen Bhai (1955). Teen Bhai also co-starred Pahadi Sanyal, Nazir Hussain and Bharat Bhooshan and working in the film was quite a learning experience for Hiralal. His contract with New Theatres ended in 1949, after which he made his way back to Bombay.

One of his most frequent collaborators in the industry was Aspi Irani. Besides Qaidi No 911 , Barood, Oomar Qaid (1961), Bambai Ki Billi (Wild Cat), Baadal (1966), Nishan (1965),  he also made a guest appearance in Irani's film Shabnam (1964). Hiralal’s name in the beginning credits made the audience wait in anticipation for the actor to grace the screen. They were finally treated by his appearance in the most delightful climax which was shot in Gevacolor, making the experience even more worthwhile. It was a novel technology at that time which added to the excitement of watching the film.

In the 1966 film Smuggler by Irani, Hiralal played Kumkum’s uncle who opposed the romance between her and Sanjeev Kumar’s characters. Sheikh Mukhtar was also part of the cast. The two had played rival roles in several films like Insaan Aur Shaitan (1970) in their career while maintaining a nurturing friendship in their real life. The duo was not only appreciative of each other’s creative expressions but also brought out the best in each other while performing together in Hum Sab Chor Hain (1973), Qaidi No 911 to name a couple of their collaborations.

He completed his 100th film with Kishore Kumar's Door Gagan Ki Chhaon Mein (1964) at the age of 52. His 101st film Nishaan(1965) was a Wadia Brothers' production. Hiralal appeared in minor roles towards the latter half of his acting journey like in Arjun Hingorani's Kahani Kismat Ki (1973) and Katilon Ke Katil (1981) amongst others

Several of his films are categorised in the stunt, mythological and action genre throughout his career. He has also acted in sci-fi and fantasy films like Arabian Nights (1946), Mehbooba (1954), Miss Punjab Mail (1958), Dr Z (1959), and Alibaba (1976). It clearly highlights his versatile approach to a craft that led him to explore cinema of different kinds. At the same time, it is an illustrious mapping of the changing genres that prevailed in the industry from mythological, to stunt and fantasy films.

As an actor, one has to create the inner world of the character they are portraying on screen. In a career where he is known to be one of the most iconic villains of all time, he got an insight into conceiving the boundaries of a villainous character while performing in Faisla (1947), starring opposite Kanan Devi. This exploration of a wicked character helped him to portray some of his most famous roles later. According to him, villains are good characters that are created due to the circumstances of their lives. This explains their regretful, apologetic nature towards the end of most films. His two most memorable characters in his career were when he acted in Mera Punjab (1940) and the other was his soldier-turned-gangster role in Sipahi (1941). Mera Punjab was an adaptation of the novel The Good Earth and the film presented his character in three stages of life, a young man, as a father and then in his old age. The world of Sipahi showed the harsh reality of an economically hamstrung world which was an aftermath of World War I. His character, a soldier turned gangster meets a tragic and painful death at the end of the film in one of the most heartfelt scenes of his career.

Hiralal was known to invest a lot of thought and energy in the authenticity of his portrayals through dialogue delivery, costumes, accessories, and body language. In Kismat (1968) he played the gang leader Lopez with sinister facial expressions. He expressed through his eyes, glaring with a sinister look each time he had to threaten a character in the film. Adding to the mood of the scene, he would speak with a rather low timbre voice used to demonstrate his dreadful character. Another film where Hiralal’s used his costume to illustrate his character’s personality was in Sher Khan (1962). He played the character of Shehanshah-e-Waqt and donned an elaborated royal getup which had some influence of a quintessential Arabic headgear, altered according to the narrative’s requirements. In contrast, when he played Kharga, an assassin in Leader (1964), he made the subtle use of a Rampuri dagger to intimidate a character in a scene. In 1977’s Ranga Aur Raja, he grew an impressive moustache that gave a younger Joginder a run for his money while playing villains.

In 1945, he got married to Darpan Rani in Lahore who supported him in the various phases of his life and career. They had five sons Kamal, Krishan, Inder Lal Thakur, Prem, Ajay and a daughter, whose name is not available in the public domain. Of his children, Kamal and Krishan went on to become actors and directors themselves. His youngest, Inder Lal Thakur, was a successful model and actor, and featured alongside Sachin Pilgaonkar in the acclaimed film Nadiya Ke Paar (1982). Tragically, Inder Lal Thakur along with his family perished in the tragic Air India Flight 182 accident on 23 June 1985. His wife recently passed away on 30 September 2020.

The infamous villain on-screen was known to be an amiable man in real life. He treated people-fans and colleagues – with kindness. He was also known to be a devout Punjabi who believed that the day should start after taking the lord’s name. Hiralal was considered auspicious for several filmmakers. Leaving behind an immense contribution to Indian cinema, the handsome villain Hiralal succumbed to a heart attack in Bombay on 27 June 1982.  One of his last films was Waqt Waqt Ki Baat (1982) directed by Santosh Saroj, released a few months before his demise where he was credited for special appearance.

The history of Indian cinema is made up of each contributing member’s journey. As we have seen, Hiralal’s journey gloriously illustrates the many transitions in  Indian cinema’s history. At each transition, he and the industry came through despite the anxieties such changes cause. This article is an attempt to commemorate the memory of this versatile, skilful actor who illuminated the screen with his every performance.

Cinemaazi thanks Mr M N Sardana for his insight into writing this article.
1051 views