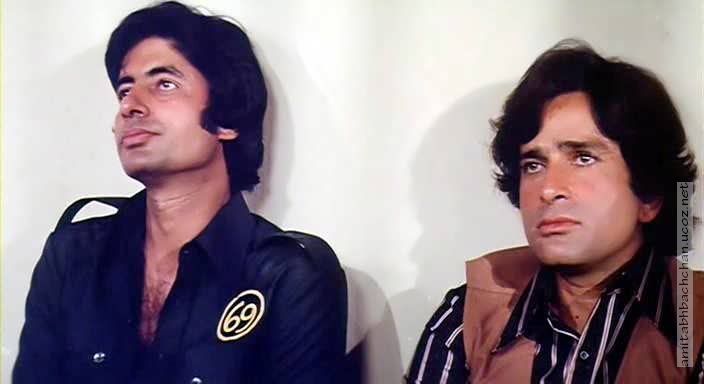 Amitabh Bachchan and Shashi Kapoor in a still from Shaan. Image credit: amitabhbachchan.ucoz

The 1980s might have been a bad phase for popular Hindi films. Almost everything went from bad to worse but the one genre that truly thrived in the decade was the buddy film.

Simply put the genre features two people — often both men — put together by forces beyond their control and their contrasting personalities creates a different onscreen dynamic than a pairing of two people of the opposite gender.

Although the seeds of the Hindi buddy film were first sowed with films such as Johar-Mehmood in Goa (1967) and its follow-up Johar-Mehmood in Hong Kong (1971) as well as the Pran-Ashok Kumar track in Brij’s Victoria No. 203 (1973), it was only with the success of Prakash Mehra’s Hera Pheri (1976) that the genre became defined.


Interestingly, there was also the sibling dimension in buddy films that for the first time truly came out in Ramesh Sippy’s Shaan (1980) where the two men – Amitabh Bachchan and Shashi Kapoor – were more of friends than brothers.

The buddy film is one of the oldest and perhaps the most successful genres in Hollywood and unlike others, it has more than managed to survive the 20th century.

One of the reasons for its popularity in Hindi cinema could be a combination of its ability to allow two stars, however big or small to get "equal" footing, something that is one of the biggest criteria when it comes to onscreen pairing, and moreover, the freedom it offered the stars to be true to their onscreen image, which is also an important facet when it comes to dealing with stars in Hindi cinema.

Take for instance a film like Andar Bahar (1984). Besides being the one to feature Anil Kapoor and Jackie Shroff together for the first time and being a remake of the Eddie Murphy-Nick Nolte starrer 48 Hrs. (1982), Andar Bahar was a film where both actors were cast in roles that suited them.

The major difference between buddy films in Hollywood and Hindi cinema is that the former has experimented with different pairings and different themes while the latter did not tinker beyond including the sibling factor. Hollywood routinely used the buddy film to feature comedy duos across different decades beginning with Laurel and Hardy and Abbott and Costello in the 1930s, Bing Crosby and Bob Hope in the 1940s, Dean Martin and Jerry Lewis in the 1960s and Walter Matthau and Jack Lemmon in the 1960s. It also had the biracial buddy films in the 1970s and 1980s with Richard Pryor and Gene Wilder, Eddie Murphy and Nick Nolte, and then added action to the genre with the Lethal Weapon series and then went global with Jackie Chan-Chris Tucker Rush Hour series.

Bollywood, in contrast, kept the genre largely confined to friends and at the most pushed it to siblings beginning with Shaan where Vijay (Amitabh Bachchan) and Ravi (Shashi Kapoor) could be mistaken for being best friends as opposed to siblings who con people.

The highpoint of the sibling factor in buddy films in Hindi cinema would unmistakably be Ram Lakhan (1989) where all obvious Hindi cinema elements – vendetta, family drama, bhai fighting bhai, childhood romance, cop and robbers, etc. – merged in one gargantuan cauldron.

After a lull in the early 1990s, the buddy film enjoyed a brief resurgence of sorts in the mid and late ‘90s. This was the phase when a new kind of multi-starrers and two-hero films were at play and the buddy film suited it the most. One of the busiest stars in the 1990s, Akshay Kumar regularly teamed up with Sunil Shetty and Saif Ali Khan and even Ajay Devgn and came to be identified as poster-boy of the decade.
Waqt Hamara Hai (1993) was the first of the 15 films that Shetty and Kumar have been featured together in and it had all the elements of the genre and later they struck gold with Hera Pheri (2000). Similarly, Kumar and Saif Ali Khan managed to hit the right notes with Main Khiladi Tu Anari (1994), which was also the remake of the Michael J Fox-James Woods’ The Hard Way (1991), and tried to reprise the same charm in Tu Chor Main Sipahi (1996) and Keemat (1998) but failed.

In the 1990s when the superstar status in Hindi cinema was in a transitory phase - Bachchan was no longer the colossus that he once was and the Khans and Akshay Kumar were yet to stamp their dominance. Here, the two-hero project became the perfect tool to navigate the box office and the buddy film proved to be of immense value.

It became the ideal ploy for a two-hero project and when combined with comedy, a little bit of action and the usual song-and-dance it rekindled the all-around entertaining films made by Brij and Manmohan Desai in the in the 1970s and the 1980s.
It was the box office failure of Andaz Apna Apna (1994) that not only changed the way two-hero projects were seen but also put the brakes on the buddy film. The film took nearly five years to get made and the ballooning costs made it a bigger commercial failure than imagined and although the film has garnered a dedicated cult following in the last few years the body blow to the buddy film was fatal.

There might still be some hope for the genre.

Today, there is a talk of a Ram Lakhan remake. Who knows that the camaraderie between a Ranveer Singh and Arjun Kapoor, or a Varun Dhawan and a Siddharth Malhotra might just entice filmmakers to try and look beyond rehashing the past and look at the buddy film with a fresh perspective especially when you have the parts you need the most.

The article was originally published in Daily O on 01 April 2017. The images used in the feature are taken from Cinemaazi archive and the internet.
376 views