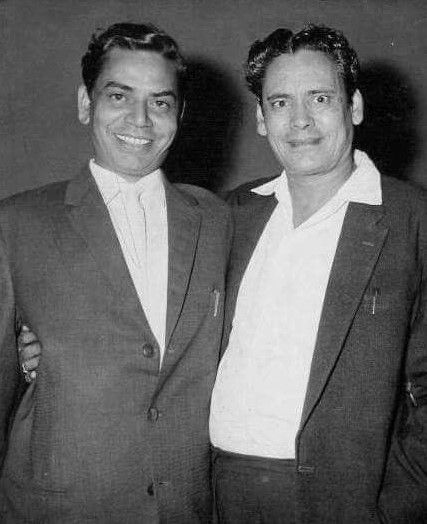 Laxmikant Pyarelal, Kalyanji Anandji, Shankar Jaikishan, Husnlal Bhagatram, Sonik Omi – Hindi cinema is replete with music composer duos throughout its history, many of them enjoying legendary status. What is more uncommon is a lyricist duo working consistently over a number of films. Yet the story of Shailendra and Hasrat Jaipuri is one such tale, and it is intrinsically linked with one of the most beloved musician duos as well – Shankar Jaikishan. Indeed, the ensemble of Shankar Jaikishan – Hasrat Jaipuri – Shailendra (along with their assistants Dattaram Wadkar and Sebastian D’Souza) is arguably the most memorable musical team of the Golden Era of Hindi cinema. Together they worked in around 78 films from 1949 to 1971, composing over 300 songs together and thereby forever etching their names in film history.

The coming together of these four individuals would have been highly unlikely if fate had not written the script. Both Shailendra and Hasrat Jaipuri hail from very different backgrounds, and yet followed similar paths to find themselves in the company of a certain Raj Kapoor.

Shailendra was born in a Dalit family in Bihar where his father Shankardas Kesrilal had been a contractor at the military canteen. He spent his early years in Mathura with his uncle after his father fell ill. Although Shailendra never faced any overt caste discrimination himself (barring some episodes in his childhood) he was acutely aware of the struggle his father underwent. Immersed in poetry from an early age, he had soon started writing verses. He earned a Diploma in Electrical and Mechanical Engineering and got a job as a mechanic for the Indian railways. He shifted to Bombay in 1947 where he worked at the Matunga Railway workshop. He had not let go of his poetic aspirations though, as he kept performing in mushairas throughout this time. He was also a member of the IPTA and reportedly composed the famous slogan Is zor zulm ke takkar mein hartal hamara naara hai, as well as the evergreen protest song Tu zinda hai. Raj Kapoor heard his stirring rendition of the poem Jalta hai Punjab at a programme and immediately offered him the job of lyricist in Aag (1948) which was to be his directorial debut. Shailendra though, at that time did not consider a career in cinema to be the right path for himself. But soon economic distress would take him back to the doorstep of Raj Kapoor. Kapoor, on his part, was not miffed by Shailendra’s initial refusal and welcomed him back with open arms. Shailendra was signed up as a lyricist for Barsaat (1949).

The coming together of these four individuals would have been highly unlikely if fate had not written the script. Both Shailendra and Hasrat Jaipuri hail from very different backgrounds, and yet followed similar paths to find themselves in the company of a certain Raj Kapoor.
Hasrat Jaipuri hailed from Jaipur as Iqbal Hussain and took his training in Urdu and Persian from his grandfather Fida Hussain. His grandfather was an accomplished poet himself. Being brought up by his grandfather after his magistrate father had passed away, a young Hussain was naturally inclined to follow in the poet’s footsteps. A born romantic, he fell in love with a girl from his neighbourhood called Radha and wrote his first poem for her. He made his way to Bombay in 1940 to look for work in Hindi films. But work was hard to come by. He wrote one song for the film Shayar (1949) but it was never included in the film. Instead he had to earn his sustenance as a bus conductor for eight long years. But he kept the flame of poetry ignited in his heart by performing in mushairas in his spare time. Much like Shailendra, it was a performance at a mushaira that was to be the turning point in his life. Only this time the person listening was Raj Kapoor’s father Prithviraj Kapoor. Impressed by his poem Mazdoor ki lash the elder Kapoor suggested his name to Raj Kapoor and an offer to write songs for Barsaat soon followed.

Ram Ganguly had been Raj Kapoor’s music director in his first film Aag. But during the making of Barsaat major differences rose between the two. Ram Ganguly left the project and the job of composer was offered to his assistant Shankar Singh instead. Shankar had been associated with Prithvi Theatres for some time and had also worked as an assistant to another famous composer duo Husnlal Bhagatram before. After a chance meeting with Jaikishan Dayabhai Panchal outside the offices of director Chandravadan Bhatt, the two became fast friends. Both shared aspirations for becoming composers one day, and soon Shankar had also gotten Jaikishan a job at Prithvi Theatres as a harmonium player. When the offer for Barsaat came his way, he requested Raj Kapoor to let Jaikishan come on board as co-composer. The dream team had been assembled.


Shailendra would write the songs Barsaat mein humse mile tum sajan and Tirchi nazar hai, patli kamar hai while Hasrat sahib would pen as many as seven songs including Jiya beqaraar hai and Chod gaye balam for Barsaat. The soundtrack was a success and there was no looking back after this.

The four established a neat division of work from the very beginning. Their success meant that their workload would increase exponentially over the years. As a result, it was impossible to work on all songs together. Generally, Shankar worked with Shailendra while Jaikishan collaborated with Hasrat sahib, although overlaps did occur. This division also suited their respective temperaments. Shailendra was partial to writing soulful and stirring songs, while Hasrat sahib wrote the more light-hearted, rhythmic songs. This suited the respective working styles of Shankar and Jaikishan.

In terms of writing also, the two seemed like a perfect fit. Shailendra’s forte was in Hindi lyrics, while Hasrat sahib was proficient in Urdu. The two would often help each other out in linguistic matters. Hasrat Jaipuri liked to think they were ‘do tan aur ek jaan’. This real-life friendship, not only between Hasrat sahib and Shailendra but all four of them, contributed to the songs they created. As Dr Mandar V Bichu has pointed out, there are numerous instances of their playful camaraderie producing memorable songs. The song Mud mud ke na dekh mud mud ke (Shree 420, 1955) was born when Shailendra was teasing Jaikishan for looking at a passer-by. The song Ramaiyya vastavaiya (Shree 420, 1955) came about when they heard a group of construction workers singing a folk song. Shankar Jaikishan, for their part, were incredibly loyal to the lyricists. When B R Chopra had wanted to sign them for Waqt (1965) and pair them up with Sahir Ludhianvi, they refused to work with anyone but Shailendra and Hasrat Jaipuri.

Hasrat Jaipuri liked to think they were ‘do tan aur ek jaan’. This real-life friendship, not only between Hasrat sahib and Shailendra but all four of them, contributed to the songs they created.
This does not mean there were not tiffs between them. The only instance when SJ signed a film with another lyricist was when they worked with Rajinder Krishan on the film College Girl (1960). Shailendra felt betrayed and wrote a note to them saying Chhoti se yeh duniya, kahin to milenge kabhi to milenge. Shankar Jaikishan apologised to the writers. The note was later turned into a song for Rungoli (1962).

The only time a rift emerged between the two poets was over the issue of Dev Anand’s Guide (1965). While it is common knowledge that Shailendra wrote the lyrics for this musical classic, it was Hasrat Jaipuri who had originally been hired for the purpose. Hasrat sahib had previously contributed to the hit music of Vijay Anand’s Tere Ghar Ke Samne (1963). But Vijay Anand and Dev Anand were not happy with the lyrics he wrote for Guide and opted to bring in Shailendra instead.

By the 60’s though Shailendra had shifted focus to the production of his dream project Teesri Kasam (1966). Due to production delays, it took years to complete. By the end of the ordeal Shailendra was heavily in debt and his health was deteriorating. The film turned out to be a masterpiece. Shailendra had assembled his dream team – Raj Kapoor as hero, Shankar Jaikishan as composers and Hasrat Jaipuri as co-lyricist. While the majority of the songs were penned by Shailendra, in which he could utilize his extensive knowledge of dialects to the hilt, Hasrat Jaipuri provided two songs – Duniya bananewale, and Maare gaye gulfam.

The film proved to be the swansong of this team as Shailendra succumbed to his ill-health on 14 December, 1966 (which was incidentally Raj Kapoor’s birthday). Many of his songs were released posthumously, including his unfinished work on Raj Kapoor’s magnum opus Mera Naam Joker (1970). The unfinished theme song Jeena yahan marna yaha was finished by his son Shaily Shailendra, who also went on to become a lyricist. After his passing Raj Kapoor had written an open letter to Filmfare for his Kaviraj where he had said, “A part of my soul has gone. It is not fair. I break down and weep at this snatching away of one of the fairest roses in my garden.”

After Shailendra's passing Raj Kapoor had written an open letter to Filmfare for his Kaviraj where he had said, “A part of my soul has gone. It is not fair. I break down and weep at this snatching away of one of the fairest roses in my garden.”
The death of his friend had a great impact on Hasrat sahib. While they had never worked with each other outside the oeuvre of Shankar Jaikishan, it is true that their best-known work was the fruition of their chemistry.  The remaining trio could never revive the magic of old and after the passing away of Jaikishan in 1971, the team ceased to exist.

While both Shailendra and Hasrat Jaipuri would go on to do remarkable work with other composers as well, their tandem with Shankar Jaikishan had made them the most outstanding music team of the Golden Era. The three Filmfare Awards won by Shailendra and the two won by Hasrat Jaipuri were all with Shankar Jaikishan (although for Andaz, Hasrat sahib was the sole lyricist). Theirs remains a remarkable story of different temperaments seamlessly complementing each other, attaining that elusive clarity that transforms individual talent into collective brilliance.