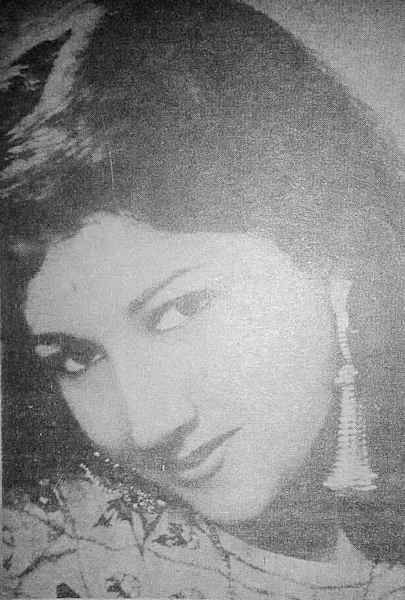 Meet new-comer Nasreen, who is now beginning to twinkle like a tiny little star on the film horizon. A teen-aged girl bubbling with life and enthusiasm, she has talent, grace, poise and the spirit to work hard– qualities necessary for reaching the top of the ladder of fame. Possessing a good photogenic face, she has a promising future.

Nasreen, whose real name is Ghazala Sultana, made her acting debut even while she was a young pupil in a convent school in Muzammil’s Mahatma Gandhi ka Paigam. She had this assignment since producer-director Muzammil happened to be a friend of her family. After her maiden vehicle, she continued her studies, not being keen on pursuing a movie career. She wanted to become a doctor and her parents were also willing to help her. But destiny led her to films again after she completed her matriculation course.

Luckily for her, Nasreen did not undergo the usual trials and tribulations that beset a new aspirant for screen stardom. Akkoo Productions signed her up for a comic role in their Al-Hilal (1958), knowing full well her flair for comedy roles. The picture, however, did not create wide ripples in the Press but her performance in the film did capture, the imagination of some of the producers. Many critics had missed the film since it was considered as an insignificant, mediocre production.

There is much to gain in meeting people, knowing them and understanding them. I don’t believe in retiring into my room and indulging in idle daydreams.
Though there was no notice of her in the Press, the producers, always anxious to introduce new faces on the screen, did not hesitate to sign her up in their films. She has currently starred in Dr Shaitan (1960), Midnight (1972), Abdullah the Great, Bahurani (1964) and two untitled productions of P.N. Arora. Having watched her on the sets of these films and witnessed the “rushes” of some of them, I am in a position to say that she is developing into a versatile actress, with a penchant for a comedienne’s role.

A delightful conversationalist, Nasreen told me the other evening when I happened to meet her at her flat at Marine Drive that she was just a beginner and that she was deeply anxious to learn the technique of acting and achieve perfection. “Thank God”, she said. “I have been able to meet you this evening. I have long been wanting to meet critics just to find how they dared to criticize even long-established and versatile artistes of the screen. For beginners like me, there is much to learn from them and I am of the view that there should be a perfect understanding between the artistes and the critics. To develop that understanding, a meeting is necessary and so I am glad that, that opportunity has come to me now”.

A sociable girl with amiable and pleasing manners, Nasreen, continuing, said, “By nature, I am fond of company. I like to talk, exchange views and learn from the experience of others. There is much to gain in meeting people, knowing them and understanding them. I don’t believe in retiring into my room and indulging in idle daydreams. In fact, I hate loneliness and I cannot understand those, especially artistes, who refuse to stir out of their ivory towers.


First and foremost, I am a human being and I would, therefore, be just human in all of my dealings”.

“Like all human beings, Nasreen went on. “I do make mistakes but I have learnt to be honest with myself, not to rationalize failure, to be objective and to correct my mistakes. One factor in success is allowing the experience to be your teacher. I have learnt patience and discipline and I am still learning them. I know recognition doesn’t come when one is too young. I have been somewhat impetuous but I am learning to ‘look before leaping’. I have, however, learnt one thing and that is not to believe flattery. Regardless of what anyone says, I recognize my weak points and strive to correct them. I feel that this rule of life applies to everyone”.

Nasreen, who has a good sense of values, considers herself a student of the cinema. She never misses a good English picture. She minutely watches the performances of the artistes and tries to emulate them in interpreting the roles assigned to her. On the Hindi screen, she admires Meena Kumari, Nargis, Dilip Kumar and Dev Anand, while her Hollywood favourites are Ingrid Bergman, Deborah Kerr, Anne Baxter and Cary Grant. Proficient in dancing —- classical, folk and ball-room – – she can play a good game of badminton, hockey and table tennis. Fond of driving long distances and shopping, she is a graceful swimmer with a stamina for remaining in the water for long hours. Above all, she is modest and that makes her endearing to all.