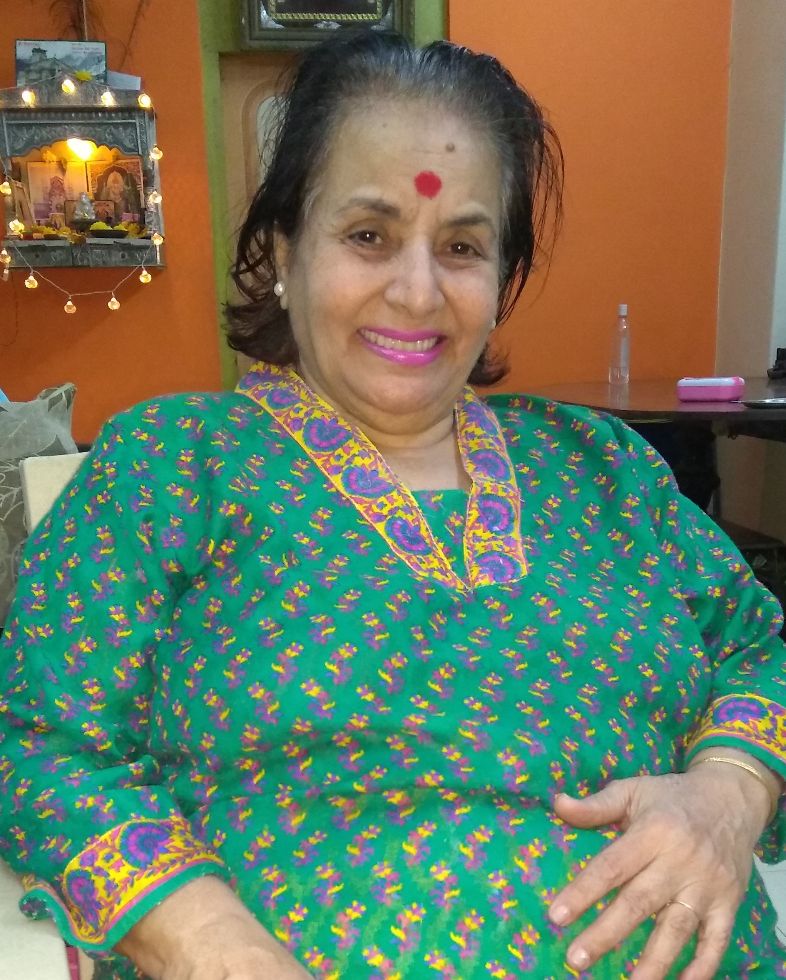 Hindi cinema of the 1950s and 1960s is known for its melodious music and mesmerising dances. When one talks of the dancers of the period, the names of dancers like Helen, Kumkum, Sheela Vaz, Madhumati, Bela Bose and Heera Sawant come to mind. Another such name is that of Jeevankala who over nearly a decade danced to multiple hit songs, acted in a few films and bid adieu to films after her marriage.

Jeevankala’s name was familiar to me. On the internet, many sites like IMDB had some information on her, though as per my experience, one cannot blindly believe their information. Meanwhile, the readers of Beete Hue Din used to often inquire about her via e-mails and messages. In view of that, I became naturally inclined towards meeting her and interviewing her for Beete Hue Din. But the only hitch was, how to contact her? Her name or address was not mentioned in the film directory, nor was it in the records of Cine And TV Artist Association (CINTAA). Inquiries with other film folk of the period also didn’t yield any results. A lot of time passed in the process. Then one day when I was interviewing dancer Heera Sawant, she suddenly asked me, “Have you interviewed Jeevankala?”. She then gave me Jeevankala’s son’s mobile number.

I met Jeevankala during the first week of December 2018 at her home in Worli. I must mention here that there are very few artists like Jeevankala who not only openly discussed everything with full honesty without hiding anything but also didn’t ask me to hide anything. This is in sharp contrast to some other personalities who after publishing of their interviews, bombarded me with questions like, ‘Why did you write this’, ‘Why did you write like that’ etc. I was forced to take down their interviews as a result after getting fed up.
Jeevankala inherited acting and dance as her heritage. Her father Dattu alias Dattatreya Kamble belonged to Pune while her mother Gangubai belonged to Kolhapur. Both were artists of the Silent Era and worked at the Pune based film company called ‘United Pictures Syndicate’. They worked in the company’s hit movies like Dha Cha Maa/ Murder of Narayanrao Peshwa (1926), Tai Teleen (1926), Draupadi Vastraharan/ Royal Gambler (1928), Raktacha Sood/ Blood for Blood (1929), Seeta Swayamvar (1929), Khooni Taj (1930) and Birth of Shivaji (1931).  Most of these films were directed by the ace filmmaker of the time, N.D. Sarpotdar. Once talkie films started, they both made a name for themselves in Marathi films as well.

"Lata used to call my mother mausi. When I was born, Lata was nearly 14 years old. It was she, who named me telling my mother, Mausi she is your Jeevankala (Life’s Art).”

Jeevankala was born on 29 June 1944 at Pune’s Diwakarwada. She tells us, “At that time the Mangeshkar family also stayed in our building in Diwakarwada and we had good familial relations. Lata used to call my mother Mausi (Aunt). When I was born, Lata was nearly 14 years old. It was she, who named me telling my mother, Mausi she is your Jeevankala (Life’s Art).”
The only child of her parents, Jeevankala studied till sixth standard in the peshwas’ school ‘Huzoorbagh’. From the age of 6 years, she started learning Kathak from Balasaheb Gokhle Guruji. She tells us, “We stayed at Diwakarwada’s Laxmi Road. When I used to practice Kathak at home, the sound of my ghungroos attracted the passers-by. One day those sounds brought Marathi film producer-director Datta Dharmadhikari to our house and offered me a child artist role in his film Akher Jamle (1952). As a result, I faced the camera for the first time at the age of six. In the film I played the role of the hero’s younger sister and danced as well. I also played the role of heroine Ranjana’s daughter in the Marathi film, Teen Mule (1954). I used to dance in Pune’s open Ganpati programmes as well. Our group was famous by the name ‘Jeevankala and Dancing Party.”
"I faced the camera for the first time at the age of six."

According to Jeevankala, once Lata became busy with film work, the Mangeshkar family had to leave Pune and settle in Mumbai. They had their own orchestra in which all the siblings used to sing. Composers Laxmikant and Pyarelal who were quite young at that time played instruments in that orchestra. The orchestra used to have shows all over Maharashtra. Jeevankala used to dance in those shows and would often visit Mumbai from Pune to participate in them.

Jeevankala learnt dance under the tutelage of Gokhle Guruji for nearly five years. The famous actress Jayshree Gadkar was also his pupil. In 1956, Jeevankala’s family also shifted to Mumbai. She tells us, “In Mumbai, we stayed in the ‘Mukund Mansion’ building which was opposite Dadar’s Kohinoor Cinema. I took admission in class 7 in the Rammohan Night School which was opposite Dadar’s Plaza Cinema. I completed my 11th in 1960.”
Jeevankala made her debut in Hindi films in 1959’s blockbuster Goonj Uthi Shehnai. She recalls, “I went to Andheri’s Prakash Studio to meet producer-director Vijay Bhatt with my mother. They needed a solo dancer for Goonj Uthi Shehnai. I was interviewed in the presence of the film’s composer Vasant Desai and choreographer Prem Dhawan who also saw my dancing. They both recommended my name to Vijay Bhatt and thus, I got an opportunity to dance in the film’s superhit song Ankhiyaan bhool gayi hain sona, dil pe hua hai jaadoo tona.”
In 1959, she danced in K.Amarnath production’s movie Kal Hamara Hai in the solo Aise na dekho rasiya jiya jaaye and superhit duet Jaao rasiya hato jaao rasiya. Jaao rasiya is still often heard on the radio. It was Chitragupt’s composition sung by Lata and Usha Mangeshkar. Her co-dancer was the well-known actress of the time, Sheela Kashmiri.

Jeevankala also got an opportunity to dance in the 1962 super-hit Tamil film, Konjum Salangai (Enticing Anklets). She remembers, “We saw an ad in the newspaper that they needed a classical dancer for a Tamil film. I went to meet them with my mother at the address given which was for Dadar’s Rooptara studio and they signed me. I was 18 years old at that time. Konjum Salangai was the first movie on Bharatnatyam made by Madras’s famous producer-director M V Raman. In this movie I danced to classical music pieces (Todey) and not any songs which I consider an achievement for me.”

Jeevankala started acting with the 1961 release, Kismet Palat Ke Dekh. She was the second lead for the movie whose lead roles were played by Anup Kumar and Preetibala. The movie had initially been titled Zara Palat Ke Dekh. The same year she tried her hand at comedy with Agha for Zindagi Aur Khwab. She had an important role in the fantasy movie Char Dervesh (1964). She played Mala Sinha’s friend in Himalay Ki Godmein (1965) while playing the vamp’s role with Ramesh Deo in Saraswati Chandra (1968).
Jeevankala in addition to acting danced to nearly 70 songs in as many films.

Jeevankala’s mother passed away in 1965 when she was merely 21 years old. She recalls, “We were close to actress Sulochana. After my mother passed away, my father told Sulochna ji, ‘Didi, I have just one daughter. Who will take care of her after me. Please arrange for her marriage’. She immediately suggested the name of Marathi screenplay and dialogue writer Ram Kelkar whom she considered like her son. She took the proposal forward and we got married in 1969.”
Ram Kelkar was born in Mumbai’s Girgam area. His father ran the restaurant ‘Kelkar Vishranti Griha’ opposite the CST station. He was the only son of his parents while his only sister was already married. Ram Kelkar wanted that Jeevankala should take care of the home like an ideal homemaker. In view of his wishes, Jeevankala stopped acting in films after her marriage. Her last movie was ‘Saraswati Chandra’.
(Sulochana had only one daughter named Kanchan. Kanchan’s husband, the Late Dr Kashinath Ghanekar was a dental Surgeon as well as the star actor of Marathi plays. In addition to Marathi films he had also played important roles in Hindi films Daadi Maa (1966) and Abhilasha (1968). Dadi Maa’s superhit song Jaata hoon main mujhe ab na bulana is picturized on Kashinath. He passed away in 1986 at the age of 56).
“Marriage proved very lucky for Ram Kelkar ji. Soon after the marriage he got a break in Hindi films as a screenplay writer with producer-director Sohanlal Kanwar’s Be Imaan which released in 1972. "

Jeevankala stays with her sons Yogesh and Hemant and daughter Manisha in Worli’s Dr Annie Besant Road. Hemant is a film editor, writer and director who has assisted Subhash Ghai in many films. He made the Marathi film Bhola Shankar in 2008. Manisha is active as an actress in Marathi films and has acted in Hindi films as well including Lottery (2009), Bandook (2013) and the January 2019 release Jhol.
"Dance still gives me boundless energy and satisfaction.”

Jeevankala summarized her current life like this, “I had bid adieu to films nearly 50 years back. After that I got busy with my household duties but did not leave my dancing. I still conduct dance classes where pupils learn Kathak and Folk Dance. Many foreign students also attend my classes. Dance still gives me boundless energy and satisfaction.”