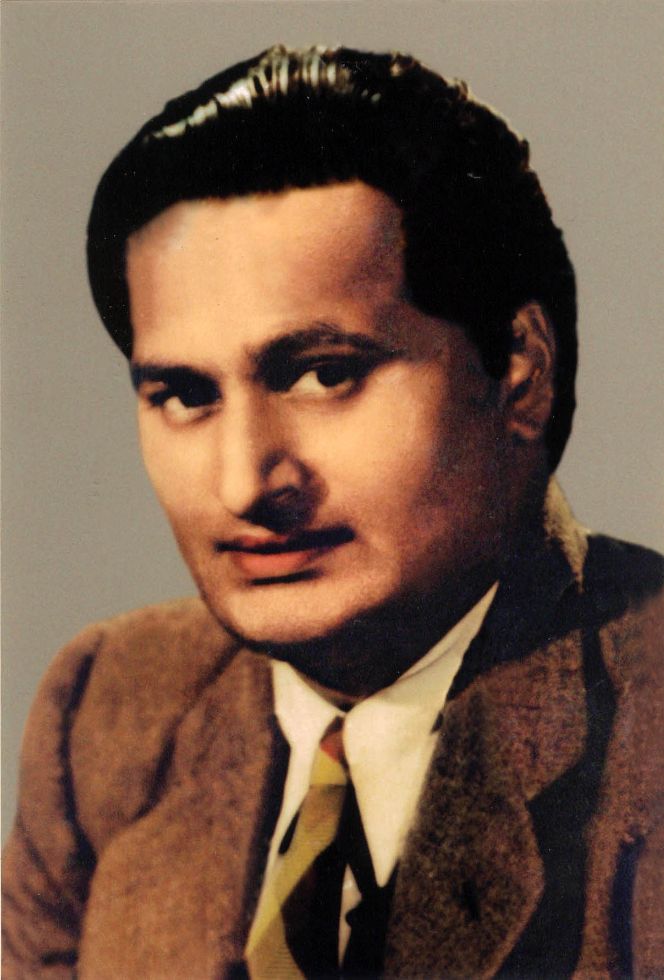 When this six feet tall, physically fit actor used to mouth dialogues in his orotund voice on stage facing the legendary Prithviraj Kapoor, the auditorium echoed with applause. People would leave the auditorium humming his songs. He left his home in Churu District of Rajasthan when he was called to Mumbai by his elder brother, Bharat Vyas. Though he wanted to be a playback singer in films, he eventually became an actor as destined.

Brij Mohan Vyas, commonly known as B. M. Vyas says, “I was interested in music and singing since childhood.  I am a Shastri [B.A. (Honours)] in Sanskrit. In the early 1940s, my brother asked me to come to Mumbai. When I reached here, I started taking singing classes at Deodhar Sangeet Vidyalaya near Opera House. Around the same time, I sang twenty songs in the Rajasthani play Ramu Chanana. Lyricist Pandit Indra heard my songs and introduced me to owners of Ranjit Movietone, Sardar Chandulal Shah & Gauhar Jaan and I was given the opportunity to sing for the film Bharathari (1944).”


Producer Chandulal Shahs film Bharathari made in 1944 under the banner of Naveen Pictures was directed by Chaturbhuj Doshi. The lead cast included names like - Surendra, Mumtaz Shanti and Arun Ahuja. For this film, B. M. Vyas sang the song Alakh niranjan, jai jai jai manaranjan written by Pandit Indra, under the music direction of Khemchand Prakash. Picturized on Arun Ahuja,  this song was very popular at that time. Later he sang songs for films like Naulakha Haar (1953) under the music direction of R.C.Boral and Maharana Pratap (1946) under the music direction of Ram Ganguli. He sang the famous group song Hindustaan ke hain hum hindustaan hamara with Rafi, Shyam Kumar and *Alauddin (*reference: Naushad's filmography by Vishwas Nerurkar) for the film Pehle Aap made in 1944.

B. M. Vyas says “I became an actor by chance. I was recruited in Prithvi Theater as a singer but Prithviraj Kapoor was impressed with my knowledge of Sanskrit and offered me the role of Kanva Rishi in their first play, Shakuntala. With this play, my acting career took off.” B. M. Vyas was part of Prithvi Theatre for eleven years. During that period he not only played important characters in plays like Deewar, Pathan, Gaddaar, Ahuti and Paisa but was also actively involved in their music department.

"Since I never planned my acting career, I took any role that came my way and soon got recognition as a character artist.”

B. M. Vyas says “In that era, the music industry was going through a change due to the entry of newcomers in the field. With increasing acting commitments my singing career took a back seat. Around mid-40s Prithvi Theatres manager Ramesh Sehgal left the theatre group and joined Chetan Anand's company India Pictures. The company was busy with its first venture Neecha Nagar (1946). On Ramesh Sehgal's recommendation, I was chosen to play the part of Kamini Kaushal's elder brother. Actress Zohra Segal played my wife. With this film released in 1946, my acting career in films took off. Since I never planned my acting career, I took any role that came my way and soon got recognition as a character artist.”


B. M. Vyas played the father of various leading artists onscreen like Nargis in Barsaat (1949) and Awaara (1951), Meena Kumari in Baiju Bawra (1952) and Shammi Kapoor in Tumsa Nahin Dekha (1957). He was highly appreciated for his performance as the prisoner in V. Shantaram's famous film Do Ankhen Barah Haath (1957) and as Chanakya in Samrat Chandragupt (1958). His role as Ravan in the successful film Sampoorna Ramayan (1961) became so famous that he was flooded with offers to act in mythological films. Soon he became an integral part of films made by producer-director Homi Wadia who was famous for making mythological, historical and fantasy films under him banner Basant Pictures. After acting in close to 200 films, B.M.Vyas quit acting in the early 1990s after the release of films like Maa (1991) and Daulat Ki Jung (1992).

Father of six daughters and one son, B. M. Vyas lost his wife in December 2008. In 2009 he moved to Kalyan, an eastern suburb of Mumbai after selling his bungalow in Juhu. Born in the year 1920 in Churu (Rajasthan), B. M. Vyas turned 92 on 22 October this year. Though his body reflects his age, it is comforting to see that he still retains the freshness in his voice and memory. Shri B.M.Vyas Ji passed away peacefully at his Kalyan residence today i.e. on 11th March 2013 at 7.30 AM. Team Beete Hue Din's heartfelt condolences.