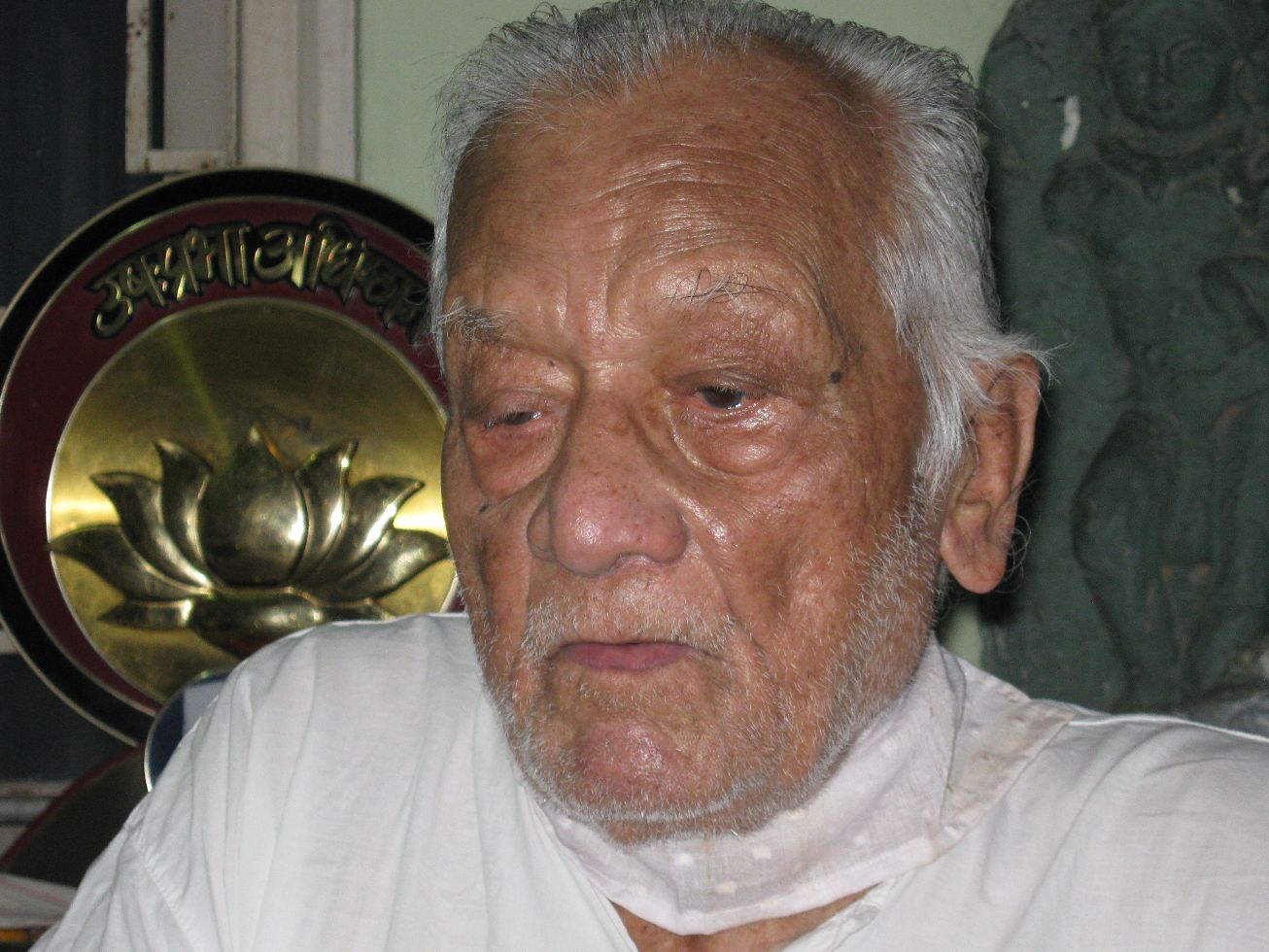 Babubhai Mistry. Image Courtesy: Beete Hue Din
English  |   हिंदी
In the year 1931, Indian Cinema had finally got its voice with the film Aalamara. That era was not only Hindi cinema's but also Indian cinema's early juvenile stage. That period did not have any film making schools or today's cutting-edge technology. And as far as the question of computers goes, this magical machine was a thing beyond people's imagination. At such a time when Nanabhai Bhatt of Prakash Pictures saw The Invisible Man, an English film full of special effects, he was so impressed that he wanted to make a Hindi film based on the same story and likewise the responsibilities of tendering the special effects fell on the shoulders of an 18-year-old teenager, Babubhai Mistry. To show the presence of the invisible man on the screen, Babubhai used some very ingenious home-grown techniques. For this, he used dim lights and a black curtain as the background on which objects of daily use were given the illusion of movement with the help of a black thread. The phenomenal success of his experiment not only established him in the cine world but also made him famous as Kaala Dhaga (Black Thread). This film was Khwaab Ki Duniya (aka Dreamland), made in the year 1937, was directed by Vijay Bhatt, the music director was Lallubhai Nayak, the lyricist was Sampat Lal Shrivastav Anuj and artistes were Jayant, Sardar Akhtar, Shirin, Umakant, Ismail, Madhav Marathe, and Zahoor. Khwaab Ki Duniya was the very first film made in India in which special effects were used. This also happened to be Director Vijay Bhatt's first film.


Babubhai was born on 5 September 1918 in Surat City, Gujarat. His father was a building contractor. Babubhai was just 14 years old when his father died. As he was the eldest, he had to shoulder the responsibility of a widowed mother and 9 younger siblings. To find employment he was obligated to go to his paternal uncle in Mumbai where his uncle Rangeeldass Bhagwandass was working as an art director in Krishnatone Film Company. Those days Krishnatone banner was involved in making films like Harishchandra (1931), Heer Ranjha (1929), Laila Majnu (1931), Pak Daman (1931), Ghar Ki Lakshmi (1931) and Bhakt Prahlad, Krishnavtar, Navchetan (all 1932). Renowned music director Madhulal Damodar Master from the initial phase of talkie films started his career with the film Navchetan. As per Babubhai, his uncle helped him a lot and on his referral, Babubhai got a job as an assistant art director for the film Hatimtai which was made in the year 1933. Made in four parts, film Hatimtai was produced under the banner of Bharat Movietone, whose writer-lyricist and director was G.R.Sethi Shad and music was by Madhulal Damodar Master. As per Babubhai, initially, his job was to make film posters and to assist in set designing, but slowly and steadily, his interests expanded to all the various aspects of the film. As a result, as soon as he got the chance, he started working in all other film making departments as well. As people started getting to know him, their faith in his abilities started growing. This was about the same time when Nanabhai Bhatt and Vijay Bhatt were confounded as to how to go about the special effects for the film Khwaab Ki Duniya. Babubhai had said, "in those days to have special effect experts in India was a long shot, people did not even have the basic know-how available yet. I just used a little bit of brain and it became very easy."


In that era, Wadia brothers, J.B.H.Wadia and Homi Wadia's Company Wadia Movietone was famous for making devotional, stunt and fantasy films, these movies were predominantly made based on special effects. With the success of Khwaab Ki Duniya, Wadia Brothers gave Babubhai the responsibility of special effects of the films made under their banner. It wouldn't be wrong to state that Babubhai Mistry was the father of special effects in Indian Cinema. In his extensive career, he gave special effects for films not only like Noor-e-Yaman, Circuswali, Aladin Aur Jadui Chirag, Gul Sanovar, Alibaba Aur Chalis Chor, Angare, Jagadguru Shankaracharya, Veer Rajputani, Pak Daman, Nav Durga, Mr. X, Angulimal, Janam Janam Ke Phere, Hamrahi, Love In Tokyo, Mera Naam Joker, Jugnu, Nagin, Warrant, Dream Girl, Barood, Dharam Veer,  Bundlebaaz, Khuddar, Zamane Ko Dikhana Hai but also rendered special effects for television serials like Mahabharat, Shiv Maha Puran, Krishna, and Vishwamitra. Be it Aladin Aur Jadui Chirag's flying carpet or falling buildings in the climax of the film Aurat or the much talked about the scene where Hema Malini is seen flying in the title song of Dream Girl, all these were possible because of Babubhai  Mistry's dynamic imagination.

In the year 1942, Homi Wadia parted ways from Wadia Movietone and had established Basant Pictures. According to Babubhai, this was that juncture where after having made a name for himself in art direction and special effects, he now wanted to try his hand in the direction as well. At this point, both the Wadia brothers came forward to help him. J.B.H.Wadia gave Wadia Movietone's film Muqabla (1942) and Homi gave Basant Pictures' first film Mouj's directorial responsibilities to Babubhai. Muqabla was released in the year 1942, whose music director was Khan Mastana, lyricist A.Kareem and actors were Nadia, Yakub, Agha, Dalpat, Rajni, Jal Khambata and Khan Mastana. On the other hand year 1943 saw the release of film Mouj whose music was given by Vasant Desai, the lyricist was A.Kareem, and actors were Pahadi Sanyal, Kaushalya, Nadia, Agha, Meera, and Mansoor. Batuk Bhatt was Babubhai's co-director for both the movies. But either of the movies could not do very well at the box office. In spite of this, through films like Hanuman Patal Vijay (1951), Nav Durga (1953), Tilottama (1954), and Shri Krishna Bhakti (1955), Babubhai kept dabbling in direction. But he ultimately got recognition as a director with the film Sati Nagkanya (1956) under the banner of Mukti Films. The music director was S.N.Tripathi and the main cast featured actors like Nirupa Roy, Manhar Desai, Indira Bansal, P.Kailash, S.N.Tripathi, and Mahipal. After film Sati Nagkanya's phenomenal success, Babubhai Mistry was considered as one of Hindi cinema's busiest directors. Later on, he directed Hindi films like Naglok (1957), Pawanputra Hanuman (1957), Maya Bazar (1958), Samrat Chandragupt (1959), Bedard Zamana Kya Jaane (1959), Chandrasena (1959), Madari (1959), Maya Machhindra (1960), Sampoorna Ramayan (1961), King Kong (1962), Mayajaal (1962), Sunehri Nagin (1963), Parasmani (1963),  Kan Kan Me Bhagwan (1963), Mahabharat (1965), Bharat Milap (1965), Sangram (1965), Sardar (1967), Shamsheer (1967), Har Har Gange (1968),  Anjaan Hai Koi (1969), Bhagwan Parshuram (1970), Saat Sawaal aur Hatimtai (1971), Shri Krishna Arjun Yuddha (1971), Brahma Vishnu Mahesh (1971), Daku Mansingh (1971), Nag Panchami (1972), Hanuman Vijay (1974), Alakh Niranjan (1975), Mahabali Hanuman (1980), Kalyug aur Ramayan (1987) and Hatimtai (1990) and also directed one Telugu and nine Gujarati films as well as the teleserial Shiv Maha Puran. While music director Kalyanji Virji Shah began his career with Babubhai's film Samrat Chandragupt (1958), Laxmikant Pyarelal's pair began with Parasmani (1963). Renowned trick photography and special effects experts like Peter Pareira, Ravi Nagaich, Satyen, and Danny Desai also started their careers as Babubhai's assistant

Many decades ago Babubhai's cancerous voice-box was removed from his throat because of which he had to rely on artificial voice equipment to express himself. According to Babubhai's sister's son and Sahara News Channel's camera and studio in charge - Kamlesh Kapadia, Babubhai was operated in the early 1960s, during the release of film Parasmani. In spite of the ordeals he faced, he steered his career towards the heights of success. Stirred by Babubhai Mistry's unfailing will power and success, Mumbai's famous Tata Memorial Cancer Hospital made a documentary on Babubhai to inspire other cancer patients.


Film Hatimtai (1990), produced by  Ratan Mohan, was the last film directed by Babubhai. Its music director was Laxmikant Pyarelal and the main characters were played by Jeetendra, Sangeeta Bijlani, Sonu Walia, Satish Shah, and Raza Murad. Once again In the late 90s, by directing the teleserial Shiv Maha Puran, Babubhai Mistry made his presence known on the small screen and then, with the onset of old age, he thought it is best to retire from the limelight. After his wife's demise in the mid-1990s, a childless, Babubhai Mistry became completely alone. Henceforth, his youngest sister and Kamlesh Kapadia's mother took very good care of him. His apartment's drawing-room situated on the 2nd floor of Shyam Kamal Building near Dinanath Mangeshkar Hall of Vile Parle (East) is brimming full with many awards and trophies including Lifetime Achievement Award under the Zee Lux Cine Awards and Kodak Technical Excellence Award. He received the Kodak Technical Excellence Award on 6th January 2005 at Mumbai's Ravindra Natya Mandir during the inauguration of the MAMI film festival from the then CM Vilas Rao Deshmukh.

The father of Trick Photography and special effects of Indian Cinema, Kaala Dhaga (black thread) viz. Babubhai Mistry passed away on 20 December 2010 at the age of 92 years.