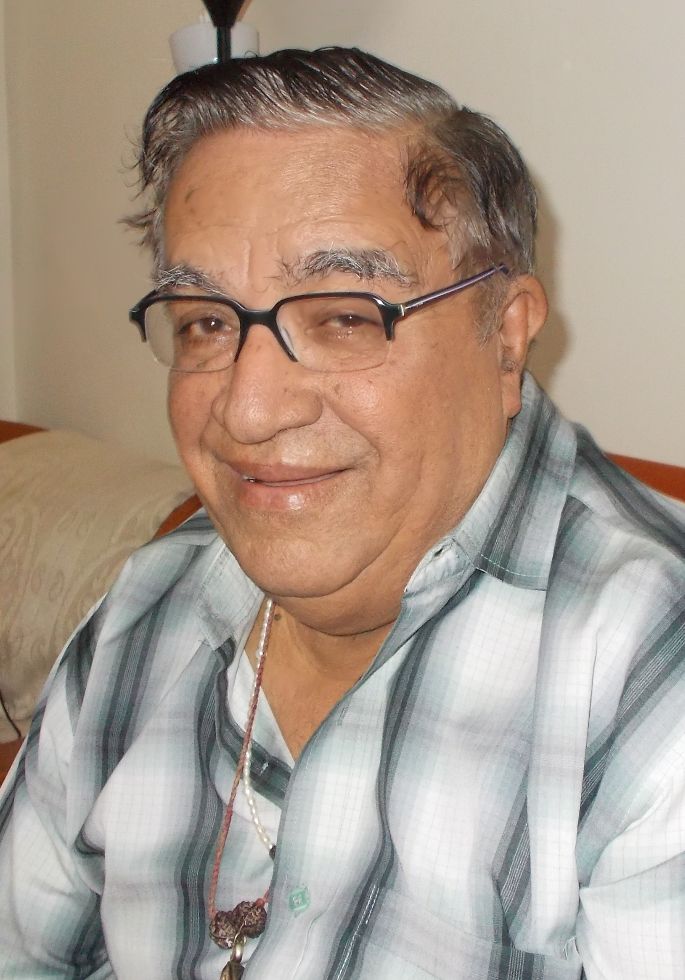 Birbal. Image Courtesy: Beete Hue Din
English  |   हिंदी
Hindi Cinema has had only a handful of comedians who could effortlessly make the audience laugh. Their appearance on-screen itself used to induce laughter into the inner core of the viewer. Gope, Tuntun, Keshto Mukherjee, and Dhoomal belonged to this category of comedians. Another name in this list is Birbal, who is a well-known face in the Hindi cinema. Contrary to his screen image, he is a mature, sensitive and conscious individual. However, at the same time, his comprehension of humor is also amazing. I met him recently at his residence in J.P. Road, Andheri(West). During this interview with Beete Hue Din, He talked about his personal and occupational life in detail in a very interesting and piquant manner.

So, here we present, Actor Birbal’s story in his own words: -
I was a big fan of Kishore Kumar. I used to see each film of his multiple times, used to sing his songs, and wanted to become an actor just like him! Since Dev Anand sahib belonged to Gurdaspur only, I had a special affection towards him. The Kishore Kumar sung solo Ae Meri Topi Palat Ke Aa picturized on him in the movie Funtoosh (1956) was a special favourite of mine. I used to sing this song often and hence, my nickname in college became “Funtoosh”!
“I was born on 29 October 1938 in Gurdaspur’s Dhariwal town’s Khosla Family. I was the eldest among three brothers and two sisters. My name was very lovingly kept as Satinder Kumar and with the customary addition of the family name Khosla, my full name was Satinder Kumar Khosla. Although our ancestral place was Noormahal, my paternal grandfather had spent his whole life in Dhariwal. Since I was the eldest grandson, my paternal grandmother, being very fond of me, didn’t let me go anywhere. Therefore, although, my father operated a Printing Press in Lahore, my childhood was spent in Dhariwal only with my paternal grandmother. I did most of my primary education in Dhariwal only, though I had ‘blessed’ a Lahore school for a year with my presence too. After partition, we all came to Delhi.


I completed my eighth class from the Government A.V. Middle School in Bara Hindu Rao, Delhi. After that, I pursued my Higher Secondary at Sadar Bazar’s Hiralal Jain Higher Secondary School. I performed so well there that all schools in Delhi denied me admission immediately after seeing my mark sheet. After a lot of struggle, finally, I got admission in a college in Jalandhar. Before they could give my mark sheet a second look, I barged into and set camp in the college hostel! Thus in the year 1957-58, I managed to complete my B.A. Ghazal Singer Jagjit Singh was my college senior by one year.

In college, I used to participate in plays and Bhangra events. I was a big fan of Kishore Kumar. I used to see each film of his multiple times, used to sing his songs, and wanted to become an actor just like him! Since Dev Anand Sahib belonged to Gurdaspur only, I had a special affection towards him. The Kishore Kumar sung solo Ae Meri Topi Palat Ke Aa picturized on him in the movie Funtoosh (1956) was a special favorite of mine. I used to sing this song often and hence, my nickname in college became “Funtoosh”!

Meanwhile, after coming to Delhi from Lahore, my father had opened the Khosla Printing Press in Sadar Bazar’s Thana Road whose one branch is in Narayana also. On my return from Jalandhar after completing my education, my father made me responsible for it. However, within a few days, he understood that I cannot sit in one place for long and gave me the job of taking as well as delivering orders. I liked this job a bit as I had to go around on my bicycle the whole day but this liking did not last long. Meanwhile, father had come to know about my ambitions of becoming an actor too. He did not appreciate my running away to watch each new Kishore Kumar ‘first-day-first-show’ and always used the choicest words for me as well as Kishore! My mother had already passed away when I was only twelve years old.

One day I wandered onto the sets of Raj Khosla Sahab’s film Do Badan (1966). By a stroke of luck, I caught the attention of the film’s hero Manoj Kumar. He called me. I came to know that they wanted to call Gulshan Bawra to do the part of a stupid-looking boy in one of the scenes but Manoj Kumar felt I looked more stupid than Gulshan! Manoj Kumar asked me, ‘Would you like to act’?
In February 1963, I ostensibly went to take orders for the press in Mumbai. Raj Kapoor’s manager Sohan Bali was in Delhi at the time. Without telling father, I had asked him to send a recommendation to actor-director Ramdayal. Although I used to bring a few orders from Mumbai, I used to spend most of my time entertaining Ramdayal and his friends in his office with my mono-acting. I had started staying in a guest house, opposite Liberty, near Bombay Hospital. I struggled a lot and met many people. After four-five months, one day, Ramdayal gave me work in a single shot of a song in his film Raja (1963). Jagdeep was the hero of this movie. The shooting was to take place the whole night in Chembur. While going, I traveled in Ramdayal’s car. After pack up, there was no proper way of return. I had hardly any money of my own. I traveled by foot, the ten-kilometer distance between Chembur and Dadar following which I took a five paisa ticket in a tram to the guest house. After a year, in 1964, suddenly my father arrived in Mumbai. He slapped me and said, ‘Two and a half feet height, the face of a badger and you want to become an actor?’ When Ramdayal tried to take my side, my father scolded him and chided in no uncertain words that he should desist from attempting to spoil his son. And then he dragged me back to Delhi. However, the acting bug bit me again five-six months later. With the promise that I would not look towards films again, I came to Mumbai again giving him the hope that I was coming only to take orders.

Thus, my struggle in the studios began again. I made a lot of friends during this period. One of them was Raj Khosla Sahab’s assistant Sudesh Issar. One day I wandered onto the sets of Raj Khosla Sahab’s film Do Badan (1966). By a stroke of luck, I caught the attention of the film’s hero Manoj Kumar. He called me. I came to know that they wanted to call Gulshan Bawra to do the part of a stupid-looking boy in one of the scenes but Manoj Kumar felt I looked more stupid than Gulshan! Manoj Kumar asked me, ‘Would you like to act’? Since there is a huge difference between looking stupid and being stupid so there was no question of me refusing the offer and I took up the assignment. I got to speak dialogue in front of the camera and I did it well. Then, another day, I landed on the sets of another Raj Khosla film, Mera Saya (1966). Sudesh told me that there is a good role of the assistant advocate of K N Singh available and suggested that I ask Raj ji about it. Raj ji was reading something opposite me at that time but I was afraid to go in front of him. Sudesh kept pestering me but I feared talking to him. This indecision of mine annoyed Sudesh, who gave me such a powerful kick that I rolled straight away onto Raj ji’s feet! He was surprised and I explained everything to him. This is how Sudesh’s kick did the job of getting me that role.  After that, Raj Khosla ji called me for every film of his. Here, I should tell you a secret, that Khosla sahib was also originally from Noormahal and was a distant relative of ours. When he realized this, his behavior towards me became even warmer.  It is the truth that it was because of him only that I could settle in Mumbai.

In the 1980s along strike had taken place in the film industry and no work could be done for nearly twenty days. During this period, Junior Mahmood asked me to accompany him in a stage show in Nagpur. I became nervous as stage shows were a totally new ball game for me. Nevertheless, with encouragement from Junior Mahmood and my joblessness, I took the name of God and went to Nagpur. I did the mimicry of Om Prakash Ji, acted in two-four songs like Haal Kaisa Hai Janaab Ka. The show was a hit and it opened a new avenue for me. Since then, I have done shows in many countries of the world including England, America, New Zealand, and the Gulf.

Now let me come to the topic of love and romance. I had gone in 1972 to Jammu for the shooting of the movie Daraar (1972). I got into a one-sided love with a girl there. As a result, my day’s peace and night’s sleep both vanished as I fell even deeper in love with her. On coming to know about it, the film’s director, Ved Rahi ji went to ask her mother with my marriage proposal. Her obnoxious mother slammed the door saying she’d prefer dumping her daughter in the well over giving her hand in marriage to film folk! The girl’s life was saved and I came to Delhi from Jammu with my broken heart in my pocket. For the first time, I heard my father’s words humbly and quietly married a girl of his choice. My wife is from a Bhatia family of Janakpuri and I have now become a maternal as well as a paternal grandfather. My daughter Shalini is married into a business family named Guglaani of Dadar. She has a son and daughter from her marriage. My son Santosh is at a high post in a shipping company. He, his wife and daughter stay with us.


In my initial films, I was credited as Satinder Kumar Khosla only. One day on the sets of movie Anita (1967), Manoj Kumar told me that my name resembled that of a hero and I should consider keeping a comical name. We gave it a lot of thought, coming up with lots of names but in the end we both got stuck with the name of Birbal. He liked the name a lot, though he quipped that in reality though Birbal was known for his brains, you look like a fool on screen.
Over the past 50 years, I have done nearly 500 films. These include Punjabi, Bhojpuri and Marathi films other than Hindi. I have appeared in one odd Bengali and Rajasthani film too. Today, as well, I act in stage shows and when the opportunity arises, I act in films and T.V. serials. Overall, I can say with conviction, that my life is passing well, full of abundant peace and happiness.”