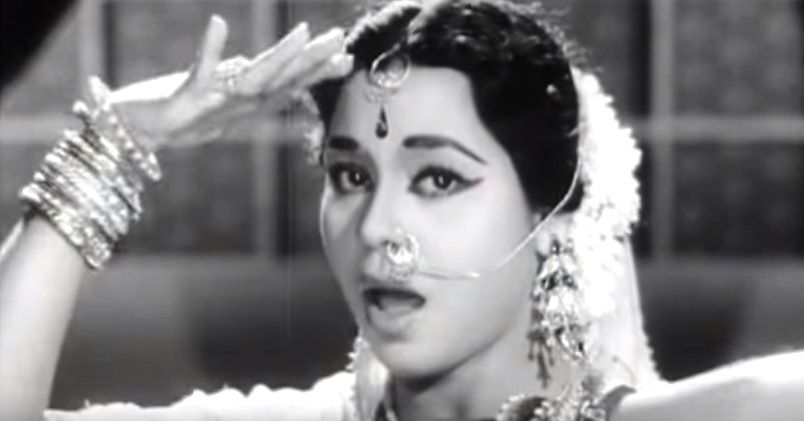 Kumkum, the famous actress of the 1950s and 60s had entered Hindi Cinema as a dancer. However, she started getting acting offers very soon. Although, she could not join the league of the top actresses of her time, she did manage to achieve recognition as an accomplished dancer, second lead and character artist. She did over hundred films during her over two-decade long career and finally settled abroad post-marriage.

I met Kumkum at her home in an apartment complex on the 16th road of Bandra (West). By then she had returned to India after spending nearly two decades abroad. Her relation with cinema no longer existed and she was spending her life as an ordinary housewife with her husband and daughter. She maintains a distance from the media and I had to make significant efforts to convince her for this interview. However, after meeting her face to face, I could make such a homely and comfortable atmosphere, it did not feel as if I was sitting and talking with a star actress of her time.

Kumkum recalls, “My father Nawab Manzoor Hassan Khan was a landlord of Hussainabad near Patna. We had huge areas of land and at one time our family owned more than half of Patna. I was born in Hussainabad. When I was two and a half year old, we shifted to Patna. Times changed and we lost the Nawabdom. Though, the status and luxury of Nawabdom remained, the sources of income had dried up. Thus, our financial condition started deteriorating. When I was five, we were forced to leave Patna for Kolkata.”

Sheesha released in 1952. Shahid Lateef was the director of the movie which was composed by Ghulam Mohammad. The main leads were Sajjan and Nargis. Kumkum says, “My original name is Zebunnissa and people used to call me Zeba. However, on entering the film world, I got the new screen name of Kumkum. I got dancing opportunities in the films Noor Mahal and Mirza Ghalib in 1954. However, I got real recognition with the film Aar Paar which also released in 1954.

Film Aar Paar’s producer-director and lead was Guru Dutt. The film was ready for release and its date of release had been fixed. At that time, censor board objected to the Shamshad Begum sung song, “Kabhi Aar Kabhi Paar Laga Teere Nazar” which was picturized on Jagdeep insisting that it be picturized on a lady artist. Guru Dutt did not have much time. He called me for a screen test and thus, the song was picturized on me which was also choreographed by Guru Dutt himself.”

Film Aar Paar and its music was a massive hit. It was the first hit in the career of composer O.P.Nayyar. His earlier three films, Aasmaan, Chham Chhama Chham and Baaz had not done very well commercially. This film was the first one under the banner of “Guru Dutt Films Pvt Ltd”. The success of the film gave recognition to Guru Dutt as a producer and established the careers of O.P.Nayyar and Kumkum.


Kumkum recalls, “I had bid adieu to the film world after the 1973 release Jalte Badan. My hero in the movie was Kiran Kumar. However, my last released film was Bombay By Night (1976) which was made over a long period with lots of delays in between the shooting schedules. My hero in that movie made in black & white was Sanjeev Kumar.”

Kumkum got married in the year 1975. Her Husband Sajjad Akbar Khan belonged to Lucknow and used to work in Saudi Arabia. After her marriage Kumkum also shifted to Saudi Arabia and spent nearly twenty years there. She returned to India for good in the year 1995 with her family.

Kumkum tells us, “On returning to Mumbai, my husband started working as a builder. He made this building on the land where my bungalow used to stand. My relations with the film world had been severed decades ago. I am now leading a life of bliss with my small family comprising of my Husband and my daughter Andaleeb”

Contrary to the statement of Kumkum, famous Kathak Danseuse Sitara Devi had told me that Kumkum was the daughter of Shri Vasudev Maharaj, the famous tabla maestro of Benaras who was the maternal grandfather of actor Govinda.

It used to be often heard that Kumkum is the maternal aunt of Govinda. However, I never took it seriously as according to my information, Govinda’s mother Nirmala Devi, who was a famous thumri singer, had a totally different family background from Kumkum and even their religions were not the same. However, when people started asking me about this, my curiosity was also aroused. Internet searches suggested many interesting arguments, primary among which was that Nirmala Devi was born into a Muslim family and embraced Hinduism later. The same information is found published in a book on film artistes in which even her name before so called ‘change of religion’ is mentioned, which is nothing but the result of funny imagination. It should be noted that her husband Arun Ahuja was a well-known actor in the 1940s. One of the articles somewhere even said that Kumkum was not a Muslim but a Hindu from Sindh. It’s obvious that all these ideas were far from the truth .

Even though, to me, the idea of Kumkum and Nirmala Devi being real sisters was baseless but it was necessary to dig out the truth. Therefore, one day I asked Sitara Devi ji herself because like Nirmala Devi, she also was from Benaras and her family was also involved with dance and music. Sitara ji told me, that both shared a father but they had different mothers. Sitara ji also told me that Kumkum has a younger sister named Radha too.

Sitara ji elaborated that she doesn’t know about Patna or Hussainabad but Kumkum and Radha are the daughters of Vasudev Maharaj. Nirmala Devi was the daughter from Vasudev Maharaj’s Hindu covert whereas Kumkum and Radha were borne by his mistress who was a Muslim. We used to call her Munnan Aapa. It was Munnan Aapa who had taken her daughter Kumkum to Lucknow to learn Kathak under the tutelage of Shambhu Mharaj. Sitara ji also told me that Govinda’s maternal grandfather and Nirmala Devi’s father was from a prominent Kshatriya family of Benaras, that his real name was Vasudev Narayan Singh and that he was a famous tabla player. It’s important to note that Vasudev Maharaj’s son and Govinda’s maternal uncle Lakshman Narayan Singh alias Lachchu Maharaj was also a famous tabla player who passed away in the last week of the previous July. Govinda’s word - ‘Kumkum aunty ordered me…’ in an interview published in a national level newspaper seems to confirm Sitara Devi ji’s above stated statement.

I wanted to discuss this point as well as confirm whether her date of birth, ’21 December 1935’ as shared by the Surat Based Eminent Film Historian Shri Harish Raghuvanshi ji was correct. I tried to contact Kumkum ji but the youth who picked up her phone gave me the impression that Kumkum ji is no longer interested in talking to the medium. Hence, I was forced to include these unsubstantiated points in my writeup. As per the above birth date, Kumkum ji will turn 81 in the coming month of December.

Coming to Kumkum’s younger sister Radha, She had acted by the screen name of Radhika in a couple of movies like Mr. & Mrs. 55 (1955), Raat Ke Raahi, Laal Nishaan (Both 1959) and Shola Jo Bhadke (1961). Raat Ke Raahi’s song Daayein Baayein Chhup Chhupa Ke Kahaan Chale was picturised on Radhika and Shammi Kapoor. This song is available on YouTube. Radhika also stays with her family in Mumbai.