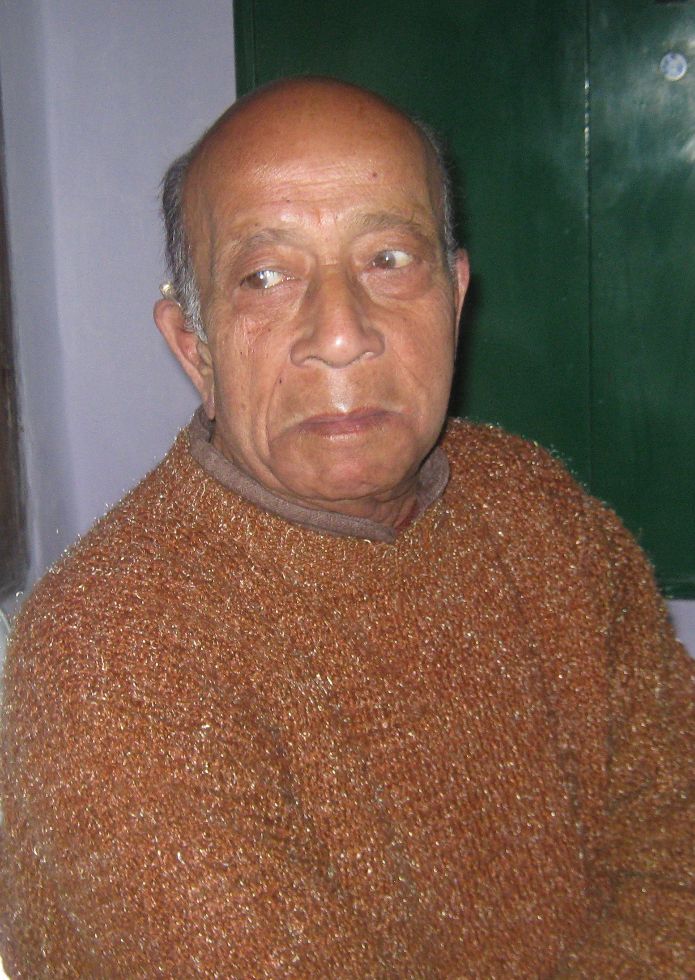 Karunesh Thakur. Image Courtesy: Beete Hue Din
English  |   हिंदी
Any discussion on Pre-Independence Hindi Cinema and the studio system prevalent at the time brings to mind many names including Mumbai's Ranjit, Bombay Talkies and Wadia Movietone, Kolhapur's Jayaprabha, Pune's Prabhat, Calcutta's New Theatre and Lahore's Pancholi Arts. These are the studios that enriched the Hindustani Cinema with their high-quality creations and created a permanent glorious place in history.  However, Amidst these big names, some other studios had also come up which though existed for a short period whose names cannot be ignored by those interested in the history of Hindi Cinema. One such shortlived Cinema was Lahore's Leela Mandir which was founded by Thakur Himmat Singh.

Thakur Himmat Singh's ancestors were Rajputs who left their homes in United Provinces (now Uttar Pradesh) to come to seek asylum in the court of Maharaja Ranjeet Singhji. The Maharaja had given them permission to settle down in the Mochi Darwaza area of Lahore. Thakur Himmat Singh was a well-known actor of silent movies made in Lahore and had played the role of the villain in the Punjabi movie Dulla Bhatti (1940). The director of this movie was Roop K Shorey and its composer was Pandit Gobindram. This movie is also known as the first movie in the career of well-known composer O.P. Nayyar. He had sung in the chorus of this movie song Rab Di Janaab Vichon Aeho Dilm Mangda, Ambiyaan Da Baag Hove, Badlaan Di Chhan Hove, and was one of the actors in its picturization too.

The first movie under the Leela Mandir banner was the Punjabi Movie Kamli which was released in 1946. Its director was Prakash Bakshi and its composer was Inayat Hussain. Its main cast consisted of Amarnath, Kiran (Shaukat), and Asha Posley. Shaukat and Asha were the daughters of the composer Inayat Hussain. This film was extremely successful in its time.


In 1947, the Leela Mandir banner started the production of the Hindi film Bedardi. Its direction was again given to Prakash Bakshi. Thakur Himmat Singh's son Karunesh after completing his Matriculation exams had started his career with the film unit as an Assistant Director. He was only eighteen years old at the time. During his recent meeting with Anmol Fankaar, Karunesh Thakur ji told us that in those days the house of my maternal aunt (Masi) was being done in Dehradun.

"We started the shooting of Bedardi on 3 August 1947 and proceeded to Dehradun for further shooting with the unit on 12 August where we stayed in my aunts semi constructed house. But the partition happened at that time and riots took place. To protect the unit from rioting we had to go to Calcutta overnight. We had to change its name to Doctor Ramesh (1949) but it got caught in red tape and never got released." (In contrast with Shri Thakur's information, Hindi Film Geet Kosh credits it as a 1949 release.  In this regard, Shri Harmandir Singh "Hamraaz" says that its source is the Censor certificate issued for the movie. Whether the movie was actually released or not is immaterial. Since the certificate was issued in 1949 the movie is treated as a released movie.)

Remembering those troubled times, Karunesh ji says that, "Partition had sealed any chances of a return to Lahore.  We had lost all our money in the film and we had to return to Dehradun. Our family consisted of one younger brother and three sisters along with my parents. After coming to Dehradun, I took up work in the Census office at a salary of two rupees per day and my father went to Lucknow to make documentaries for the government. In spite of this, our financial condition could not improve. Then one day with ten rupees in my pocket, I left."

In Mumbai, Karunesh ji met his friend from Calcutta, Roshanlal Malhotra. Mr Malhotra was employed in the army and he also had nobody in Mumbai. They rented beds at a rate of Rs 1 per day in a lodge in Dadar.  Karunesh ji's maternal uncle Ramesh Thakur was a well-known character actor of the period whose two-room house near Dadar's Basanti Music Hall was unoccupied. After some days Karunesh ji and Mr. Malhotra shifted to that house. We became carefree after getting a roof over our heads. But one day we were witness to a murder in front of our house and we abandoned the place in fear.

"We came across writer C.L. Kavish (Chunnilal Nagiya) who was a resident of Peshawar whom I knew from our Lahore days. A few days before partition Producer-Director H.S. Rawail had taken him to Calcutta where he had written the dialogues for Rawail's film Jhoothi Kasmen. The cast of this 1948 released movie comprised of Robin Mazumdar, Ramola, Hiralal, Rooplekha, Iftekhar and Sunder. Its composer was G.A. Chisti. Although Kavish was in Kolkata at the time of partition his family had come to Dehradun. Meanwhile, Kavish had come to Mumbai. On his recommendation, I got the post of an Apprentice in Makhanlal Jain and Rajendra Jain's company Filmkaar. This banner had produced movies including Chhoti Bhabhi (1950), Deedar(1951), and Ghunghroo (1952) earlier."

The movie with which Karunesh ji started his Mumbai Innings was Maan which had released in 1954. Its main cast comprised of Ajit, Chitra, Jagirdar, Kumar, Achla Sachdev, Durga Khote and Yashodhra Katju. Its composer was Anil Biswas and its director was Dr Safdar Aah. This movie was made in spurts and caused the producers losses. They then started a movie called Shikwa starring Dilip Kumar and Nutan aiming to overcome their losses. Its producer Ramesh Saigal was also a big name in those days just like its lead actors. Unfortunately, the movie Shikwa got shelved and the company which was already struggling financially shut shop. Karunesh ji was Ramesh Saigal's Assistant in Shikwa. The movie had another assistant named Chander Saigal who became a very good friend of Karunesh ji. When filmkaar closed, Karunesh ji got a job as Assistant in Jyoti Studios movie Pataalpari whose director was S.P. Bakshi. Meanwhile, Chander Saigal became Assistant in the film company Deep Pradeep which was co-owned by the actor Pradeep Kumar and the producer Deep Khosla. During this period Karunesh ji assisted Director Rafiq Rizwi for the movie Caravan produced by Dev Jolly. Film Caravan released in 1956.

Karunesh ji recalls, "When S.P. Bakshi got Filmistan's movie Sun to Le Haseena (1958), he left Pataalpari midway. In this situation, the producer gave me the responsibility to complete the movie. The composer of this Jairaj-Shakeela-Tiwari-Kumkum-Ramesh Thakur-Yashodhra Katju starrer was S Mohinder and I was credited as its co-director. This movie released in 1957. Meanwhile, my friend Chander Saigal got his break as director for the movie Ek Shola (1958). This was a big-budget movie starring Pradeep Kumar, Mala Sinha, Jawahar Kaul, Shubha Khote, Nazir Hussain, Dhoomal and Tuntun. Its music was composed by Madan Mohan and its dialogues were written by Nasir Hussain. I worked as Chander Saigal's chief assistant for the movie. In addition, I wrote the movie's screenplay along with Chander Saigal and Mohan Kumar. Mohan Kumar who was Chander Saigal's assistant later went on to direct many hit movies like Aas Ka Panchhi (1961), Anpadh (1962), Aayi Milan Ki Bela (1964), Aap Ki Parchhaiyaan (1964), Aap Aaye Bahaar Aayi (1971), Ameer Gareeb (1974), Aap Beeti (1976), Avtaar (1983) and Amrit (1986). During the shooting of Ek Shola (1958), I also got the opportunity to direct a short film named Natkhat Chandu."

After some time Pradeep Kumar and Deep Khosla separated. When Deep Khosla started Independently with the movie Batwara he made Karunesh ji its director. This movie was made on the novel of C.L. Kavish and the composer of this 1961 released Social was S. Madan. The songs of Batwara were extremely popular. Its Rafi-Asha duet, Yeh Raat Yeh Fizaayen Phir Aayen Na Aayen, Aao Shama Jala Ke Hum Aaj Mil Ke Gaayen retains its freshness till this day. Karunesh ji mentions that the censor objected to its original line Aao Shama Bujha Ke Hum Aaj Mil Ke Gaayen and they had to change the line in the film although the original is retained as it is on the records and Audio CDs.

Meanwhile, Pradeep Kumar started his independent production in the form of Mitti Mein Sona (1960) with Chander Saigal as its director. This O.P. Nayyar composed 1960 movie had Pradeep Kumar and Mala Sinha as its lead pair. This film's Asha solo Poochho Na Humen Hum Unke Liye Kya Kya Nazraane Laaye Hain retains its popularity to date. Unfortunately, the director Chander Saigal passed away in a freak accident during the making of the movie. He was merely 30 years old at the time. Karunesh ji is sad about the death of his close friend even today. Karunesh ji tells us, "I got many movies after the success of Batwara.  These included Beni Talwar's movie Aage Teri Marzi and producer M.R. Seth's Bina Rai-Manoj Kumar starrer and a Saira-Shammi Kapoor starrer. But unfortunately, all these movies got shelved one after the other. In this scenario, I decided to turn producer with my Punjabi movie Sat Saliyaan which was a superhit. After that, I started the Hindi movie Chor Darwaza (1965) but it also got shelved after four reels."

In 1968, Karunesh ji made the movie Aanchal Ke Phool (1968) which was based on a novel by C.L. Kavish and produced by M.R. Seth. Its cast included Sajjan, Kamini Kaushal, Jeevan, Jayant, Madan Puri, Sunder, and Ulhas. Its composer was Ved Sethi. This movie won that year's President's Award. Karunesh ji says, "Getting the President's Award was definitely an achievement for me. However, my career did not get many benefits from the movie. Whichever big movies I started all got shelved. I had to unwillingly do many small budget movies with small star casts like Bhaavna (1972), Baazigar (1972), Albeli (1974) and Shaadi Se Pehle (1980) although I did not make any compromises in doing justice to them."

Karunesh ji now stays in his ancestral house in Dehradun's Karanpur area with his younger brother and sister. His wife and two sisters have already left for the heavenly abode. His younger sister Ms. Kamlesh Thakur retired from the post of Hindi teacher from the famous Marshall school of Dehradun. He's married and only daughter Rohini stays with her husband in Mumbai. Karunesh ji is currently the Vice President of the Uttarakhand Film Chamber of Commerce.  In 1999 the then Uttar Pradesh Governor Shri Surajbhan presented him with the K.N. Singh Film Vidya Doon Ratan Award instituted by the Urban Corporation.

During his talk with us at his home on the evening of 14th December 2011, Karunesh ji ponders, "Sometimes I think that if my films had not remained incomplete, my career would perhaps have taken a different direction. But then I feel, only efforts are in the controls of a human being and the rest is up to fate."

Shri Karunesh Thakur passed away on 3rd July 2013 at Dehradun.