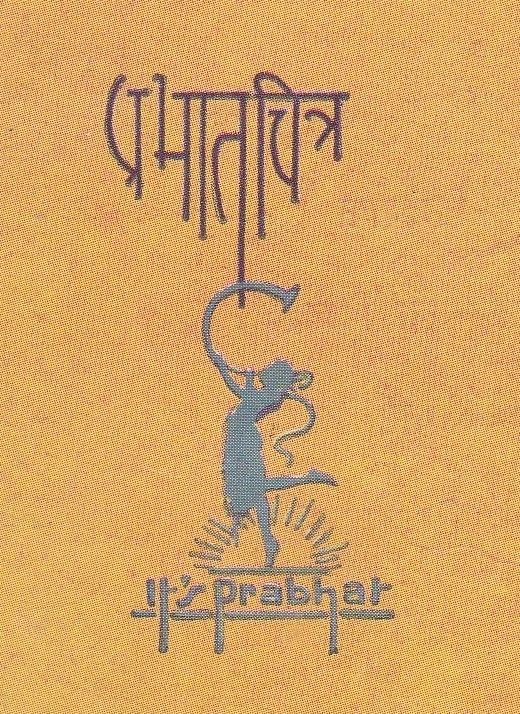 Among the ace film companies viz. New Theatre & Madan Theatre of Kolkata and Ranjit Movietone, Bombay Talkies & Wadia Movietone of Mumbai during the 1930s,  another respectable name was of the Prabhat Film Company of Pune which is still remembered for its contribution of more than 50 meaningful movies to the history of India Cinema. Not only the first Marathi talkie was produced by the Prabhat Film Company but the first music composer duo of Hindi Cinema named Husnlal Bhagatram, director Pyarelal Santoshi and actors Dev Anand, Guru Dutt & Begum Para were also the products of the same company. First Indian movie to have won the Best Movie Award in Venice Film Festival in the year 1937 titled Sant Tukaram was also produced in Marathi under the banner of Prabhat.


Prabhat Film Company was founded by V. Shantaram and 4 of his companions named Vishnupant Damle, Sheikh Fattelal, Keshavrao Dhaiber and Sitaram B.Kulkarni. Shantaram, Damle, Fattelal and Dhaiber worked with the Kolhapur based Maharashtra Film Company owned by renowned painter and filmmaker Baburao Painter in the era of silent films. They all resigned from Maharashtra Film Company in the year 1929 and founded Prabhat Film Company with financial help from Kolhapur's ace businessman Sitaram B.Kulkarni who also joined them as a partner in the newly founded film company. A woman playing the Trombone (Turahi / Tutari), an instrument which has a close relation with Maharashtrian culture was chosen as the logo of the organization.

Gopal Krishna was the first movie made under this banner in the year 1929 which was directed by V. Shantaram and the actors were Suresh, Kamla Devi, Anant Apte, and Bajar Battoo. Later, 5 more silent movies viz. Udaykal, Khooni Khanjar, Rani Saheba (all 1930), Zulm and Chandrasdena (both 1931) were made under the banner of Prabhat.  Udaykal and Chandrasdena were directed by V.Shantaram, Zulm by Keshavrao Dhaiber whereas Khooni Khanjar and Rani Sahiba were directed by V.Shantaram-Dhaiber duo. V. Shantaram also acted in Udaykal.


The first talkie movie made under the banner of Prabhat was a 1932 release Ayodhya Ka Raja. Apart from Hindi, this was simultaneously made in the Marathi language with the title Ayodhyecha Raja which was Marathi's first talkie. This bilingual movie was directed by V. Shantaram with Pandit Govindrao Tembe as composer and Leela, Master Vinayak, Nimbalkar & Shakuntala in the main lead. Actress Nanda is the daughter of the same Master Vinayak.

Originally founded in Kolhapur, Prabhat was shifted to Pune in 1932. In the same year i.e. 1932, two more bilinguals Jalti Nishani (Agni Kankan in Marathi) and Maya Machhindra were made under the banner of Prabhat. This banner produced colour movie Sairandhri and Tamil movie Seetha Kalyanam in the year 1933. Sairandhri was the 2nd colour movie made in India though this effort proved to be a technical failure due to the mixing of colours during the developing of the prints.

Earlier the Madan Theatre at Kolkata had produced Bilwa Mangal in the year 1932 which was the first colour movie ever made in India. Since both Bilwa Mangal and Sairandhri's postproduction was done out of India, technically they are not considered as Indian movies in totality. The movie which is considered as the First Indian Colour Movie was Kisan Kanya made under the banner of Imperial Film Company in the year 1937 as this was shot, developed and completed in India only.


Prabhat Film Company successfully produced movies with a social message like Amrit Manthan (1934), Chandrasena, Dharmatma (both 1935), Rajput Ramani, Amar Jyoti (both 1936), Duniya Na Mane and Wahan (both 1937) in the 1930s and made a place of its own among the leading companies of its time. Hindi-Marathi bilingual Amrit Manthan and Duniya Na Mane (Kunku in Marathi) is still remembered for the respective magnificent performances by Chandramohan and Shanta Apte.  An English song in the worlds broad field of battle sung by Shanta Apte in Duniya Na Mane was probably the first-ever experiment of its kind in Indian Cinema. Chandrasena was a Hindi-Marathi-Tamil trilingual movie. But at the same time, differences started arising among partners which resulted in the parting of ways by Keshavrao Dhaiber who eventually left Prabhat in the year 1937 and founded Jaishri Cinetone.

Even after Dhaiber's departure, production of successful and good movies like Gopal Krishna (1938), Mera Ladka (Marathi-Majha Baal/1938), Aadmi (Marathi-Manus/1939), Sant Gyaneshwar (1940) and Padosi (Marathi-Shejari/1941) continued under the banner of Prabhat. In the year 1939, distributor of Prabhat movies Babu Rao Pai joined the company as a partner in place of Dhaiber. But truly the main contribution behind the success and high level of movies made under this banner was that of excellent filmmaker V. Shantaram who directed 11 out of 16 talkies made under the banner of Prabhat during 1932 and 1941. Deterioration of Prabhat movies started after V.Shantaram bid adieu to this organization after the film Padosi. He got on rent Mumbai's Lalbaug area based Wadia Movietone's studio and founded Rajkamal Kalamandir there in 1942.

Though the ace banner of its time has now become history, The Film & Television Institute Of India (FTII) standing in place of Prabhat Studio is doing an amazing job of carving the careers of would-be filmmakers today.

Prabhat Film Companys circumstances uncontrollably deteriorated due to the continuous failure of its movies made in the 1940s and the 1949 release Hindi-Marathi bilingual Sant Janabai proved to be the last production of this respectable banner. In the year 1952, all the properties of this organization including the Prabhat Studio were auctioned. Prabhat Film Company produced 6 Silent, 29 Hindi, 20 Marathi and 2 Tamil movies in the 2 decades between 1929 and 1949. Though the ace banner of its time has now become history, The Film & Television Institute Of India (FTII) standing in place of Prabhat Studio is doing an amazing job of carving the careers of would be film makers today.