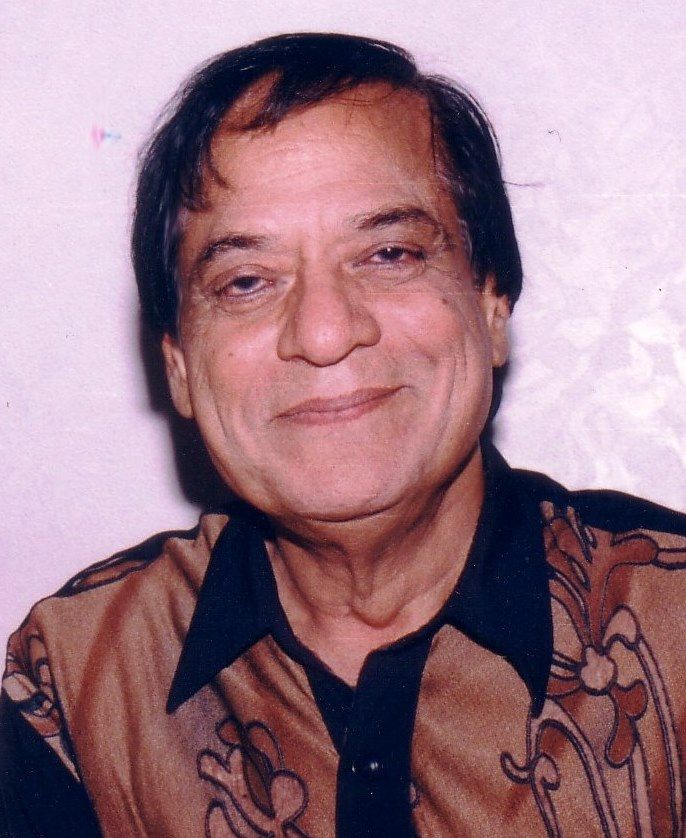 Jagdeep. Image Courtesy: Beete Hue Din
English  |   हिंदी
The Grand success of 1975 release Sholay made famous not only the smallest characters of the film but also the actors portraying them. Among them was Soorma Bhopli i.e. actor Jagdeep who entered filmdom as an extra, eventually turned a successful child artist and despite playing the hero in a couple of films, he failed to get proper recognition in all these 25 years. But Sholay's success made him a star overnight.

I first met with Jagdeep on the sets of Doordarshan serial Truck Dhina Dhin which was telecast in the year 1999. This show was produced by (Late) Mr. Pramod Mahajan's son Rahul Mahajan and its director was the renowned cinematographer of the Ad & Film world Mahesh Aney, who later won National Award for the film Swades (2004). This show was written by the famous writer-director Prayag Raj and the Kaun Banega Karorpati famed R.D.Telang. The executive producer of this countdown show was the renowned poster collector S.M.M.Ausaja who is now the vice president of the well-known auction company Osian and is also an integral part of the blog Beete Hue Din. Jagdeep and his son Javed Jaffery played uncle and nephew duo truck drivers in Truck Dhina Dhin which was the top show with maximum TRP of its time. I was fortunate to play lots of important roles in different episodes of this episodic show.


It wasn't very long that I had shifted base to Mumbai and was still very overwhelmed with the glamour of films and TV. Like an ordinary person who comes from smaller cities and towns, I was taken aback to see Sholay's Soorma Bhopli standing right in front of me. But soon I regained my composure, all thanks to his friendly behavior, my experience working with him proved to be very pleasant and unforgettable. Even after the show Truck Dhina Dhin ended, I kept on meeting with him occasionally. And when I started writing for the weekly Sahara Samay, one day I met with Jagdeep Ji in an entirely new role at his home at Bandra (West). His interview, published in my column Kya bhooloon kya yaad karoon was well appreciated by the readers.

Jagdeep was born in Datia - Madhya Pradesh on 19 March 1939. His father was a well-known barrister of the Datia State. Jagdeep's real name is Syed Ishtiaq Ahmed Jaffery but he was fondly called Munna. Jagdeep was hardly 8 when his father died and a few days later the partition of the country took place. Jagdeep says, “After the partition, the whole family got scattered. Some of the members migrated to Pakistan whereas my mother, taking me along, shifted from Datia to Mumbai where my elder brother resided. But my brother flatly refused the shelter to us. Constrainedly, we started living on the footpath opposite J.J.Hospital.”

Jagdeep's mother wanted him to focus on his studies. To run the household she worked as a water-woman in neighboring homes and as a cook in the orphanage but Jagdeep wanted to be a support to her. He says, “I felt very bad for my mother and wanted to anyhow support her. I left my studies against her wish, I worked as a labor in a tin-factory, tried my hand in kite-making, sold combs, and soaps on a footpath. One day an extra supplier in the films, promising to pay Rs.3 each, took all of us footpath dweller children along to the shoot of B.R.Chopra's film Afsana (1966). We were made to sit in the crowd watching a stage play in the scene of the film being pictured.“

Apart from Baby Tabassum and Master Rattan Kumar, another child artiste was also present on the stage playing the doorman in the scene. Despite repeated attempts, he wasn't able to deliver his dialogue properly. Yash Chopra was an assistant director in that film. He asked Jagdeep to speak doorman's dialogue which he did and was liked and appreciated by everyone present on the sets. People were so impressed with Master Munna that he got roles in 3-4 more movies the same day. Jagdeep says, “I readied myself to speak the dialogue only because I was told that instead of 3, I would be paid Rs.6 for this. Film Afsana released in the year 1951 after which I did small roles in around 20 movies viz. Araam (1951), Kaale Baadal (1951), Bhola Shankar (1951), Murliwala (1951), Aasmaan (1952), and Aar Paar (1954) as a child artist.“

Film Aar Paar's title song kabhi aar kabhi paar laga teere nazar was originally pictured on Jagdeep only. But the censor board felt the picturization on a minor boy to be obscene and ordered to remove the song from the movie. Since the release date was nearing, the song was reshot on Kumkum in urgency, though a couple of Jagdeep's shots were also retained in the song.

Jagdeep got his first big break in Ranjit Movietone's Dhobi Doctor (1954) in which he played the younger Kishore Kumar, who was the hero of the film. In this very film, he changed his screen name from Master Munna to Jagdeep.  Jagdeep says, “My character in Dhobi Doctor was that of a very emotional child who starts crying even on very little issues. After watching the rushes of this film, Bimal Roy signed me for a comedy role for the film Do Bigha Zameen (1953). He said, the actor who can make people cry, can make them laugh as well. And this turned out to be true. My character Lallu Ustad in the film Do Bigha Zameen became so famous that my little fans in Russia especially sent a red scarf as a gift to me through Khwaja Ahmed Abbas.”

Released in the year 1953, Do Bigha Zameen was the first Hindi film to be premiered at Mumbai's Metro cinema hall which was otherwise known for the release of English movies only. Jagdeep says, “At the premiere, a young man who was interviewing the artistes and technicians associated with the movie for Radio Ceylon promised that he would interview me too soon. But the day never came. One day when Ramesh Sehgal called me to teach the nuances of language to the hero of his next film, I found the same young man from the Radio Ceylon in front of me. That movie was, 1955 release Railway Platform (1955) and that hero was Sunil Dutt."

In the Children Film Festival held in 1957, 3 movies viz. Munna (1954), Ab Dilli Door Nahin (1957), and Hum Panchhi Ek Daal Ke (1957) were selected for the final round of the competition. Jagdeep had acted in all 3 movies. The Best Children Film award in the competition went to Hum Panchhi Ek Daal Ke. That time Prime Minister Pt. Jawaharlal Nehru was so impressed with Jagdeep's acting talent that during the festival he gifted him with the rule which he was holding in his hand. According to Jagdeep, he has still kept the rule with him very carefully.

After Hum Panchhi Ek Daal Ke's success, Jagdeep got a permanent job with Madras based renowned film company A.V.M. As per the contract, Jagdeep wasn't allowed to work in the movies produced by any outside banner now. The 1957 release of the A.V.M. banner Bhabhi (1957) was Jagdeep's debut movie as a hero. Actress Nanda was his heroine in this film. Bhabhi was one of the most successful movies of its time.  Nanda and Jagdeep's pair was repeated in A.V.M.s 1959 release Barkha too and they were again liked by the audiences. According to Jagdeep, with the advent of color cinema, he was offered the lead role in the film Junglee (1961) by Subodh Mukerjee but A.V.M. did not allow him to sign the outside banner's movie. The same happened when B.R. Chopra offered him the lead role in Dharmputra (1961), coincidentally B.R.s Afsana was Jagdeep's debut movie.

Jagdeep says, “When A.V.M. again refused to allow me to sign Bimal Roy's Prem Patra (1962), I got so frustrated that despite A.V.M.'s recommendation I rejected film Shaadi (1962) which was produced by A.V.M.'s favorite writer  Rajinder Krishna's brother Hargobind Ji. Eventually, this role was played by Manoj Kumar. My refusal to sign Shaadi made A.V.M. so angry that they immediately canceled their contract with me. Afterward, I did a couple of movies viz. Band Master (1963), Raja (1963), Punarmilan (1964), Noor Mahal (1965) as a hero but none of these could make an impression of it on the box office."

Both of Jagdeep's sons Javed and Naved Jaffery are associated with the films and T.V. shows. Jagdeep says, “The life is passing in peace and I want it to pass the same way.“