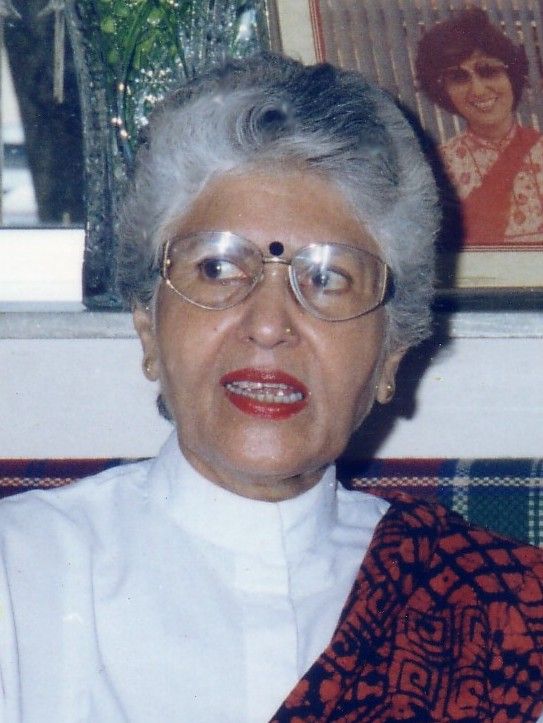 Shashikala. Image Courtesy: Beete Hue Din
English  |   हिंदी
The first name that comes to my mind when one talks of the Hindi cinema’s glamorous vamps is that of Shashikala. The audience still has not forgotten the 1960s beautiful and chirpy Bad Woman Shashikala who carved a special niche for herself in the Hindi cinema. Shashikala was not just a brilliant actress but when given the opportunity she also proved herself as an exceptional dancer. Soon to touch 80, Shashikala resides in Mumbai and is still of robust physical and mental health.

I met Shashikala twice at her flat in Vallabh apartment in Sejal Park situated on the link road in Jogeshwari (west). I had met her for the first time for an interview for my Sahara Samay-Weekly’s column Kya Bhooloon Kya Yaad Karoon and then met her again while interviewing her on camera for a documentary that was being made on her. Even after that, we would speak once in a while but then with passing time we lost touch. Four years ago when I tried to get back in touch with her, her phone was apparently not in service. And then I came to know through the Cine and T.V. Artistes Association (CINTAA) that Shashikala does not stay there anymore.

Shashikala was born on 3 August 1933 in Sholapur-Maharashtra in a traditional Marathi Javalkar family. Her father was a textile merchant and amongst three brothers and three sisters, she was the fifth child. According to Shashikala, “times were changing. My father sent his younger brother’s son to England for his further studies because of which our financial expenditure increased. At the some time the business took an extreme hit and we lost everything. I used to participate in the public Ganeshotsav cultural programs and was considered a good actress.  Hence on people’s advice my family came to Mumbai so that I could work in films and earn money.”

This occurred a few years before independence. Shashikala was approximately 11 years old at that time. During that era Urdu was a trend in cinema. According to Shashikala, Urdu was a big thing as, her Hindi pronunciation was also not up to the mark.  And then, her age was such that she would not fit among the adults or the children. In such circumstances it was not easy to get work. At that time Noorjehan was looking for a fresh face to play her daughter in her film Zeenat (1945). Shashikala met her, gave her interview but because of her bad pronunciation she could not clear the interview. Film Zeenat's director and producer was Noorjehan's husband Sayyad Shauqat Hussain Rizvi. He decided to let Shashikala sit in for the film's qawwali aahein na bhareen shikwe na kiye where she was accompanied by Baby Khursheed, who went on to be famous as Shyama, and another girl called Shalini.

According to Shashikala, in those days screen tests were taken in this way.  Shaukat Saheb had promised that among the three of us whoever would perform the best would receive Rs.20 from him as a reward and eventually, I won that reward. With those 20 rupees, new clothes were brought for all the brothers and sisters, I was given 2 sarees and after a long time, Diwali was celebrated at home. Shaukat Saheb signed me for a three-year contract where the first condition was that I would learn Urdu. Because of my speech, I lost out on the role of Noorjehan's daughter in the film Zeenat (1945) and that made me so upset that I vowed never to speak my mother tongue Marathi again. That is why today I have complete command over languages like Hindi, Urdu, English, and Gujarati.

(According to Shashikala ji, she faced the camera for the first time for the film Zeenat (1945). But her name was seen in the credits for Prabhat Studio-Pune film Chand (1944) as well that was released a year before Zeenat, though during the interview she did not make any mention of the film Chand. Shashikala ji is not in India these days hence it has not been possible to get any clarification on this issue by her.)

Film Zeenat (1945) was released in the year 1945.  In Sayyad Shauqat Hussain Rizvi's next film Jugnu (1947) Shashikala was seen playing hero Dilip Kumar's sister. According to Shashikala, Sayyad Shauqat Hussain Rizvi was so happy with her work in the film Jugnu that he decided to cast Shashikala as the lead in his next project. But then the partition took place and Shauqat and Noorjehan migrated to Pakistan. And so, Shashikala's days of struggle returned once again. After playing small roles in movies like All India Pictures' Doli (1947) and Pugree (1948) and Amiya Chakravorty's Girls School (1949).  Shashikala was cast as the lead in Ranjit Movietone's film Nazaare (1949). Her hero in the film was Agha.

After film Nazaare (1949), Shashikala was seen as a heroine in Kidar Sharma's film Thes (1949) with Bharat Bhooshan and in Kuldeep Pictures film Jaltarang (1949) with Rehman. While she essayed the role of Meena Shorey's Daughter in director Satish Nigam's film Raj Rani (1950), she was once again got the chance to work with Dilip Kumar in the 1950 film Arzoo. And then after doing a few films like Ajeeb Ladki (1952), Teen Batti Char Rasta (1953), Jeewan Jyoti (1953), Chacha Chawdhary (1953) and Shart (1954), she got married. According to Shashikala, her husband Om Sehgal was from, Kundanlal Saihgal's family and he had his own flourishing Ghee business. After marriage, her husband was inclined towards making a film. In Shashikala's words, "I was the heroine, Kishore Kumar was the hero and Mohan Sehgal was the director. Music was composed by Shankar Jaikishan. Made in six years, our film Karodpati (1961) completely bankrupted us.

Om Sehgal kept sinking under debt during the making of the film Karodpati (1961). Hence, to earn money, Shashikala had to make do with whatever films she was offered. During this phase she did stunt films, side roles and negative roles, Kar Bhala (1956), Bhagambhag (1956), Arab Ka Saudagar (1956), Nau Do Gyarah (1957), Lalbatti (1957), Captain Kishore (1957), 12  O'Clock, Madam XYZ (1959), Singapore (1960), Kanoon (1960), Sujata (1959), etc. are her films from this time. According to Shashikala, "hard times refused to ease away. I was not been able to establish myself as a heroine and hence frustrations were arising. And just then Tarachand Badjatya ji called me as he was about to start his first film as a producer."

That was Tarachand Badjatya's banner Rajshri Pictures' film Aarti (1962). Shashikala was given the role of Pradeep Kumar's sister in law. According to Shashikala, "that was a negative role and I had become so frustrated that I had sworn to leave acting after this role. But the film's Director Phani Majumdar said that after this role I would be in high demand. And that's what happened. For the film Aarti (1962), I received many awards like the Filmfare Award and the Bengal Journalist Award and I became a star. It took me 18 years to reach this stage."

Mother of two girls,  Shashikala had separated from her husband long back. But the effect of people's behavior towards her due to her publicized Bad Woman image had started to bother her. At the same time, it was getting difficult for her to mold herself into a dynamic industry. Mental stress and failures started to take such a heavy toll on her that she started to visit the Igatpuri Ashram for Vipashyana. She started inclining towards spirituality. Shashikala says, "During the making of film Ghar Ghar Ki Kahani (1988), some incidents shook her so deeply that I decided to separate myself from the movies. I left Mumbai and wandered to many places in search of peace. I did the Char Dham Yatra, visited Ashrams in Rishikesh. But I found some peace only at Dwarkapuri and Ganeshpuri's Raman Maharshi Ashram. Else, I just found religion to be a business for the many others."


Shashikala's younger daughter, Shailja, used to live in Kolkata during that time. One day, through her daughter's family friend she happened to visit Mother Teresa's Ashram. Shashikala says, "Firstly I was an actress and to top it up I had a Bad Woman image. Initially, everyone looked at me with suspicion. Many interviews took place. I did service at Shishu Bhawan and then Pune's Ashram for the mentally ill, sick elderly, spastic children and leprosy patients and was tested in this way. To clean up after the patients, giving them a bath, bandaging them, these things gave me so much peace that I just forgot where I was. Ultimately, I passed all the tests. And then after three months when I first met mother in Kolkata, I just hugged her and cried in her arms for a long time. Mother's touch reenergized me. And then the same routine started. Shishu Bhawan, ashrams of Mumbai and Goa, Surat and Asansol's leprosy asylum, service of the terminally ill at Nirmal Hridaya-Kalighat, I have even carried dead bodies. I saw many of Mother's miracles at that time. I had completely devoted myself there."

When Shashikala returned home in 1993, she came to know that her elder daughter had cancer. Her daughter's children were quite young. Her daughter passed away after two years. Shashikala says, "Mother gave me the strength to face this situation. With serials Junoon and Aah, I once again started acting. Other than serials like Sonpari and Kisey Apna Kahein, I also got busy with many films." According to Shashikala, her relations with her husband had become good to a large extent. Her husband had settled in Nainital by then.

Now Shashikala stays with her younger daughter in South Mumbai's Colaba as she had shifted from Kolkata to Mumbai. During my recent conversations with Shailja, I came to know that Shashikala ji is abroad these days. Hindi cinema's most glamorous and beautiful Bad Woman Shashikala Javalkar Sehgal will complete her 80 years on 3 August.