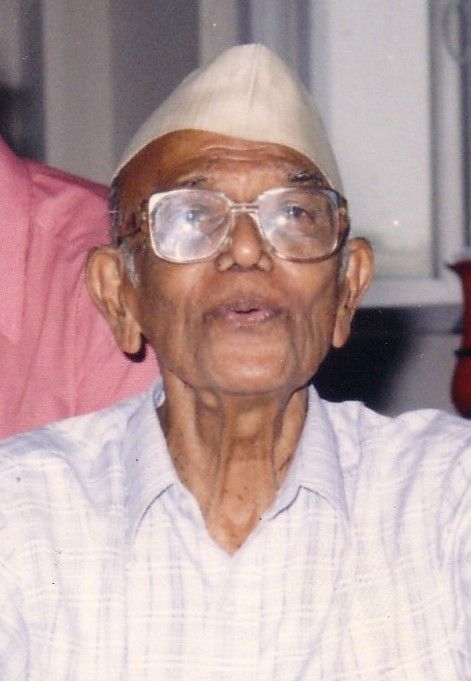 The history of Hindi Cinema boasts of many talented composers like Ghulam Mohammad, Hansraj Behl, Sardar Malik, S.Mohinder, Ajit Merchant, Ramlal, Jaidev, Iqbal Qureshi, Daan Singh and G.S. Kohli who created very melodious songs at every opportunity, yet, their career trajectories could not take them to the heights of success they deserved just because they didn't know how to sell themselves.  Among these was a very talented composer who initially worked under many aliases like Vasudev, B.Vasudev, Snehal and V.G.Bhatkar and eventually came to be recognized as Snehal Bhatkar.

Snehal Bhatkar started his career with the film Rukmini Swayamvar, made in 1946, where he was one part of the music director duo named Vasudev-Sudhir, Sudhir Phadke being the other half. Made in Hindi and Marathi under the banner of Pradeep Pictures, this bilingual mythological film was directed by Baburao Painter. But neither the film nor its music saw much success. Ultimately this proved to be the first and last film of the music director duo named Vasudev-Sudhir as they parted ways after the release of this film.

Snehal Bhatkar was born on 17th July, 1919 in Mumbai. During a meeting at his residence in South Mumbai a few years back, Snehal Bhatkar said, I was just one and a half years old when my father passed away. My mother was a teacher and was a good singer as well.  My inclination towards music grew as I saw her singing. I tried to sing with her. She was my first guru who taught me the basics of music. After completing matriculation I formally started taking music lessons at Dadars renowned music school Shri Krishna Sangeet Vidyalaya. Simultaneously I started singing in public programs at Satyanarayan Pooja which gave me recognition and ultimately I got a job as a musician with H.M.V. company. This happened in the initial years of the 1940s decade. During that period the company released many of my non-film Marathi records.


"My actual name is Vasudev Gangaram Bhatkar but I was compelled to work with a pseudo name because as per my contract with H.M.V., I was not allowed to work outside the company."


As they parted ways after the release of the movie Rukmini Swayamvar, the music director duo Vasudev & Sudhir started working independently under the names B.Vasudev and Sudhir Phadke. Snehal Bhatkars first film as an independent composer was 1947s release Neel Kamal which was produced and directed by Kidar Sharma. Snehal Bhatkars name in the credits was B.Vasudev in this film. Neel Kamal was the first film for Raj Kapoor and Madhubala as main leads. Mukesh also sang a few songs in this film but the songs for the hero, namely Raj Kapoor, were sung by Snehal Bhatkar.

Snehal Bhatkar said, "My actual name is Vasudev Gangaram Bhatkar but I was compelled to work with a pseudo name because as per my contract with H.M.V., I was not allowed to work outside the company. I worked in Rukmini Swayamvar (1946) with the name Vasudev and in Neel Kamal (1947) as B.Vasudev. In Suhaag Raat (1948) and Thes (1949) I worked as Snehal then in Sant Tukaram (1948), Sati Ahalya (1949) and Pagle (1950) as V.G.Bhatkar. ...and I had to do so to save my job with H.M.V. I also sang 6 of the total 8 songs in Sant Tukaram. And then in the year 1949, I resigned from my job and jumped into the field of music direction with the adopted name of Snehal Bhatkar.  In the year 1949, I sang few songs in Shalimar Pictures film Rangeela Rajasthan which were penned and composed by Bharat Vyas. I borrowed the name Snehal from my newly born daughter Snehalata."

During a career spanning 5 decades, Snehal Bhatkar composed music for a total of 27 Hindi and 12 Marathi films. When actress Shobhna Samarth made a film Hamari Beti(1950) to launch her daughter Nutan as an actress, the responsibility to compose the music of this film was given to Snehal Bhatkar and this was the film for which he adopted the name Snehal Bhatkar for the first time.

During 1950s Snehal Bhatkar composed music for the films Bhola Shankar, Nand Kishore (both 1951), Gunaah (1953), Aaj Ki Baat, Bindiya, Daku(all 1955), Diwali Ki Raat, Jaldeep (both 1956), Hariya, Scout Camp (both 1958), Chhabili and Guru Bhakti (both 1960). He also sang 3 songs in the film Bhola Shankar. Nand Kishore was a bilingual movie made in Hindi and Marathi. Aaj Ki Baat was produced and directed by actress Leela Chitnis to  launch her son Ajit Chitnis as a hero. Mahendra Kapoor, whose debut film as a singer was Madmast(1954) under the music direction of V. Balsara sang his first solo song Tere dar ki bhikhmangi hai data duniya saari in the film Diwali Ki Raat. Snehal Bhatkar also sang a solo song composed by K.Dutta in a 1956 release Harihar Bhakti. Film Chhabili was again produced and directed by Shobhna Samarth and the solo song aye Mere humsafar sung by Nutan and the duet Lehron pe leher, ulfat hai jawaan sung by Nutan and Hemant Kumar, of this film were great hits at that time. In the 1950s another film of Snehal Bhatkars called Ganga Ki Lehrein was made. Jaldeep, Hariya, Scout Camp and Ganga Ki Lehrein were made by Children Film Society. Though busy with his Marathi films as well during that time, Snehal Bhatkar also composed music for Hindi movies as and when he got a chance.  In the 1960s decade, 3 of his Hindi movies, Hamari Yaad Aayegi (1961), Deepak (1963) and Fariyad (1964) were released.


Through his melodious compositions Snehal Bhatkar continuously proceeded towards success but it was Hamari Yaad Ayegi's title song Kabhi tanhaiyon me yoon which brought not only Snehal Bhatkar but also the singer Mubarak Begum to the heights of popularity. Kabhi tanhaiyon me yoon is considered as one of the most popular songs in the history of Hindi film music. Some of the other songs like Farishton ki nagri me mai aa gaya hoon (Mukesh, Mubarak Begum) and Sochta hoon ye kya kiya maine (Mukesh, Lata) of this film were also big hits at that time. Film Deepak was made by Children Film Society. Songs like Haale dil unko sunaana tha (Suman Kalyanpur) and Wo dekho dekho dekh raha hai papiha (Suman Kalyanpur, Mahendra Kapoor) from the film Fariyaad were also big hits.

When actress Shobhna Samarth made a film Hamari Beti(1950) to launch her daughter Nutan as an actress, the responsibility to compose the music of this film was given to Snehal Bhatkar and this was the film for which he adopted the name Snehal Bhatkar for the first time.

Most of Kidar Sharma's films were composed by Snehal Bhatkar who also acted in Kedar Sharma's film Bawre Nain. The hit song Mohabbat ke maaron ka haal ye duniya me hota hai of this movie which was sung by Rafi and Asha under the baton of composer Roshan was picturised on Snehal Bhatkar. A 1950 release, film Sangeeta's qawwali Teri haye ke saath niklegi meri haaye which was composed by C.Ramchandra and sung by C.Ramchandra (Chitalkar) and Snehal Bhatkar was again a very big hit of its times.

Snehal Bhatkar passed away at the age of 88 years on 29th May 2007 in Mumbai. He was attached to devotional music since his childhood. Though he is not alive yet he is very respectfully and fondly remembered as a superordinate Abhang (Marathi devotional songs) singer in each and every household of Maharashtra even today.