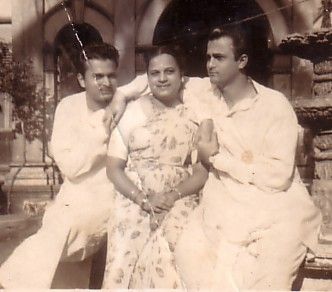 Balakram not only acted in this film but also sang a song Mauj badi ho jaldi laakar mujhe dila do wrist watch… under the music of Pandit Keshav Rao Bhole. At that time he was around 5 years old.
Recently during a meeting with Balakram’s sons and daughters I obtained a lot of information on Balakram was obtained. Born on 24th February, 1933, Balakram following the tradition of the family had started learning classical vocal from Pandit Gunidass and then from Pandit Jagannath Purohit at a very early age. After Mera Ladka, he was seen in an important role in Prabhat Film Company’s film Padosi made in 1941. This film’s director was V.Shantaram, music director Master Krishna Rao and songwriter was Pandit Sudarshan. Balakram, along with Balwant Singh and Gopal, also sang a song Kaka abba bade khiladi, ek dooje se rahe agaadi under the music of Master Krishna Rao. In Prabhat Film Company’s film Nai Kahani, made in 1943, in a song sung by G.M.Durrani and filmed on B. Nandrekar, Neend hamari khwaab tumhare, kitne meethe kitne pyaare, Balakram was seen professing his classical vocal finesse. The film's music director was Shyam Sunder. Manju was also seen acting in the film Nai Kahani and had sung a duet with Leela Mehta Aai aai udankhatole par ud kar saawan ki rani.

In Prabhat Film Company’s film Nai Kahani, made in 1943, in a song sung by G.M.Durrani and filmed on B. Nandrekar, Neend hamari khwaab tumhare, kitne meethe kitne pyaare, Balakram was seen professing his classical vocal finesse.
Manju says, “While in Prabhat Film Company, I got to learn a lot from veterans like Sheikh Fattelal, Seetaram Kulkarni, Baburao Pai and V.Shantaram, and the foremost thing I learned was value of time. In those days, the trend of freelancing was not there, all artists and technicians would be employed on a monthly salary by one studio or film company. Because I worked with Prabhat Film Company, later on I got a chance to sing for the banner’s movies like Chand and Ramshastri.”
Made in 1944, film Chand marked the beginning of not only the first music director duo Husnlal Bhagatram but also marked the beginning of actress Begum Para’s career. At this time playback had become a trend and Manju had sung two songs for the film Do dilon ko ye duniya milne hi nahin deti and Aai aai museebat aai which were filmed on Balakram. Also made in 1944, Manju had sung a song for the film Ramshastri, Kaise kheloon mai khel nahin bhaaye, which was filmed on Baby Shakuntala. In the film’s Marathi version, Manju had sung a duet with Suresh Wadkar’s father Ajit Wadkar.

Manju says, “While in Prabhat Film Company, I got to learn a lot from veterans like Sheikh Fattelal, Seetaram Kulkarni, Baburao Pai and V.Shantaram, and the foremost thing I learned was the value of time."
(As per Manju, she had sung the Kaise kheloon mai khel nahin bhaaye along with Anant Marathe. The same information has been compiled by Shri Harmandir Singh Hamraz in Hindi Film Geet Kosh. But, it’s come to light, by the audio-link provided at the end of the write-up, that it is a solo song.)

Manju says, “This was during the time when my age was such that I couldn’t be counted as a child or as an adult and that’s why I wasn’t getting any opportunities to act. Where songs were concerned, I would do rehearsals for the songs in Pune and those very songs would be recorded in Mumbai in the voice of Rajkumari or Shamshad Begum. If I was getting any work it would be the one odd song for children. In such circumstances, along with frustration and restlessness, my anger towards Prabhat Film Company was building. But I was bound by the conditions of the contract. Actor B. Nandrekar was privy to my state of mind since the time he had come to Pune for the shooting of the film Nai Kahani. One day he called me to Mumbai from Pune where in relation to a Faazli brother’s film, he introduced me, along with my screen test, to Mazhar Khan. But as soon they got to know, Prabhat Film Company’s Baburao Pai said that I was bound by a contract with Prabhat Film Company and threatened to take legal action and thus the contract I was going to sign with Faazli Brothers got canceled. Producer Chimanbhai Desai also wanted to sign me for his next film. He went to meet Babu Rao Pai in his office and somehow managed to convince him. And hence the first film I got outside the banner of ‘Prabhat Film Company’ was ‘Gaali’, which was released in 1944. Made under the banner of N.R.Desai Productions (Mumbai), this film’s director was R.S.Choudhary, music was by Hanuman Prasad & Sajjaad Hussain and the main actors were Karan Dewan, Nirmala, Yaqoob, Kanhaiyalal and Jillobai. Along with acting in the movie I also sang a few songs one of which was Holi mai kheloongi unn sang dat ke. This song was also filmed on me.”

Manju too reaped the benefits of the fabulous success of Rattan and was flooded with acting and singing offers. However Rattan proved to be her last film. Manju says, “Right after the film’s release, I got married to Karan Dewan and I had to say goodbye to the film world as my mother-in-law didn’t want her daughter-in-law to work in films. This was the reason that I had to annul all contracts of the films that were about to go on floor, one of which was singer-actress Noorjehan and her producer-director husband Shaukat Hussain Rizvi’s film Zeenat which was released in 1945.”


On the other hand, Balakram was also struggling to find work in Mumbai. After about 3 years of struggle, he finally found supporting roles in films Krishna Sudama and Naiya which were released in 1947. In Krishna Sudama he also sang a song under Shyambabu Pathak’s music Jag hai darshan ka mela... In the coming years, Balakram was seen in films like Seeta Swayamvar (1948), Lahore (1949), Sati Ahalya (1949), Maya Bazar (1949) and Sant Janabai (1949), Kamal Ke Phool (1950), Malti Madhav (1951) and Shiv Leela (1952). In the film Maya Bazar, under the music of Sudhir Phadke, he sang two duets with Lalita (Deoolkar) Phadke viz. Bachpan mera bachpan tera and Aaj ki raat nirali hai. He once again joined hands with Prabhat Film Company through the movie Sant Janabai but this proved to be Prabhat Film Company’s last film. Balakram was not very happy with his career graph and hence turned towards Marathi films, plays, and classical vocal where he found much fame and success. His Marathi films like Kela Ishara Jata Jata, Shevagya Chya Shenda, Kshan Ala Bhagyacha, Swayamvar Jhale Seeteche, Sawal Majha Aaika, Vavtal and Saubhagyakankshini as well as songs sung by him and his programs of classical vocal were much appreciated. For film Vavtal, Balakram was honored with the Best Singer’s Award by the Maharashtra Government. His Hindi qawwali Naazuk si kalaai ho jinki, wo teer chalana kya jaanein sung for a Marathi drama Katiyar Kaaljaat Ghusli had become very famous in its time. By then his elder sister Vijaymala had made her mark as a Marathi actress and his elder brother Trayambak as a tabla player & sitarist. In 1968, Balakram was once again seen essaying Lord Vishnu in a Hindi film Balram Shri Krishna. On the other hand, Manju was managing the responsibilities of the Dewan household.

Balakram was not very happy with his career graph and hence turned towards Marathi films, plays, and classical vocal where he found much fame and success.
The Dewan family basically hailed from Gujranwala (now Pakistan). Karan Dewan had worked with Ragini and Manorama in the Punjabi film Mera Mahi made in 1941 in Lahore. During those days B.R.Chopra was working as a film journalist in Lahore and had sent Karan Dewan’s pictures to Devika Rani who later called Karan Dewan to Mumbai, however, due to the ongoing internal politics at Bombay Talkies, Devika Rani could not do much to help Karan Dewan. Hence Karan Dewan started teaching Urdu pronunciation to actors and actresses. The first film that he got in Mumbai was School Master directed by C.M.Lohar and made under the banner of Sun Art Pictures in 1943 and his heroine in the film was Maya Banerjee. Of the three brothers of the Dewan family, the eldest Bheeshm Dewan had settled down in Kanpur and middle brother Jaimini Dewan and the youngest Karan Dewan were in Mumbai. After Rattan, other than producing two Hindi films Do Dil (1947) and Lahore (1949), Jaimini also produced a Punjabi film Chaman (1948). Later on, Karan Dewan did almost 3 dozen films like Duniya (1949), Pardes (1950), Dahej (1950), Ek Nazar (1951), Bahaar (1951), Teen Batti Chaar Raasta (1953), Bahu (1955), Musafirkhana (1955), Chhoomantar (1956), Chandan (1958), Shaheed (1965), Aamne Saamne (1967), Jeene Ki Raah (1969), Nadaan, Shehzada, Himalay Se Ooncha (1975), and Kala Sona (1975), of which he was seen playing character roles later on. With the passing of Karan Dewan in August 1979, Manju lost her last few ties with the glamour world as well.

Balakram’s programs of classical vocal were highly favored. During the ’70s due to an illness of the liver, his mobility got restricted and he started spending most of his time in music practice. In Dadar at Pandit Yashwant Dev’s house, he established the Gunidass Sangeet Vidyalay and started tutoring children in music. But his condition rapidly deteriorated and just 8 days after his liver operation, at the age of 41 he passed away on 2nd March 1974. His wife Smt. Vasumati Jadhav used to work at the Mumbai Port Trust. She also used to sing in Laxmikant-Pyarelal and Kalyanji Anandji’s orchestra as well as for the radio. She passed away in 2008. At present, Balakram’s eldest daughter Smt. Kalpana Patankar and son Chandrakant Jadhav live at Thane’s Ghodbandar Road and another daughter Smt. Seema Kulkarni lives in Lonavla. Balakram’s youngest daughter Smt.Chhaya Kulkarni is in Canada. On the other hand, mother to 5 daughters and 2 sons, Manju is now 84 years old, and other than Mumbai she spends most of her time either in Dehradoon with her daughter or with her younger son who stays in Sharjah. Her elder son Deepak Dewan stays in Mumbai.

Neither Manju’s family nor Balakram’s family has any ties with the cinematic world. Those ties were severed years back with the deaths of Karan Dewan and Balakram.