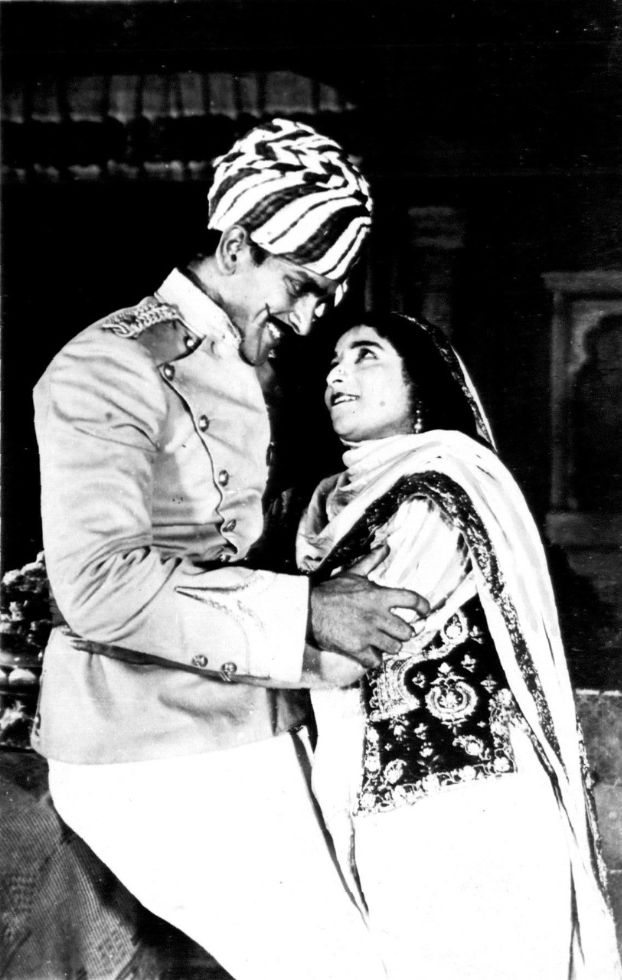 The story of Alam Ara (1931), the first Indian talkie film is woven around the two queens — Navabahar and Dilbahar — of the king of Kumarpur. Both were childless. A fakir’s predic¬tion that a son will be born to Navabahar, makes Dilbahar, who hates the king for his devotion to his second queen, jealous. Dilbahar has designs on AdIil, the Army Chief. When she is spurned by him, she gets him imprisoned and his wife banished. Adil’s wife dies while giving birth to Alam Ara.

A charm around Alam Ara’s neck reveals that she is the daughter of Adil. One night she secretly leaves the nomad camp where she has been brought up and goes to the palace to seek her father’s release. In the palace, she encounters the young prince (Navabahar’s son) who falls in love with her. In the final dramatic scene, the nomads arrive in the city in search of Alam Ara and to secure her father’s release. Aslam, their leader, manages to enter the dungeon where Adil is imprisoned. Just then Dilbahar enters, wanting to give Adil his last chance of returning her love. Finding Adil relentless, she gets infuriated and is about to kill him when Aslam rushes out of his hiding place. So do the king and his party. Dilbahar is exposed. In the end, Adil is released and the young prince marries-Alam Ara.


Alam Ara took months because of the hazards of sound recording under very trying conditions. Besides, we had to be very careful not to disclose the fact that we were making a talkie. It was a closely guarded secret.

Following are excerpts from two interviews that I conducted with Ardeshir Irani. The first took place in 1949 and the second in 1964 after a lapse of nearly 15 years. During the course of the first interview, Mr Rustom Bharucha (a versatile lawyer who later managed Imperial Studios) who assisted Mr. Irani in recording the dialogues and songs of Alam Ara was also present.


Garga: How did the idea of producing a talkie film occur to you?

Irani: About a year before I set upon producing Alam Ara, I had seen Universal Pictures’ Show Boat, a 40% talkie at Excelsior. This gave me an idea to make an Indian Talkie film. But we had no experience and no precedents to follow. Anyhow, we decided to go ahead.

G: How did you choose the subject of your first film?

I: Alam Ara was a popular stage play by that doyen of Bombay dramatists, Joseph David, who also adapted it for the screen.

G: What were the hazards of shooting a talkie film in those days?

I: There were no soundproof stages, we preferred to shoot indoors and at night. Since our studio is located near a railway track, trains would pass every few minutes. So most of the shooting was done between hours that the trains ceased operation. We worked with single system Tanar recording equipment unlike today’s double system which allows a separate negative for picture and sound. There were also no booms. Microphones had to be hidden in incredible places to keep out of camera range.


G: Did you get some training in sound recording before you came to do the sound for Alam Ara?

I: Rustom Bharucha and myself picked up the rudiments of recording from Mr. Deming, a foreign expert, who had come to Bombay to as¬semble the machine for us. He was charging us Rs.100 per day, a large sum for those days, which we could ill afford, so I took upon myself the recording of the film with help from Bharucha.

G: I notice from the credits of the film that there is no music director?

I: We had no music director for the film. I chose the lyrics and the tunes. We used only a harmonium and a tabla player, who were out of camera range and the singer sang into a hidden microphone.

G: How long did it take to complete the film?

I: In those days we completed a silent film in a month or so. But Alam Ara took months because of the hazards of sound recording under very trying conditions. Besides, we had to be very careful not to disclose the fact that we were making a talkie. It was a closely guarded secret.

G: What was the total cost of the film?

I: The film cost us only about Rs.40,000 thanks to the co-operation of the artists and technicians who shared my excitement in mak¬ing the first Indian talkie. The film was a tremendous success when released on March 14. 1931 at the Majestic Cinema. The theatre was mobbed and tickets were not available for weeks. The black-marketeers made a bonanza. Almost all the songs were hits particularly the one sung by W. M. Khan (who played the role of the fakir):
“De de Khuda ke naam par pyare
Taqat hai gar dene ki;
Kuch chahe agar to mangle mujhse,
Himmat hai gar lene ki.”