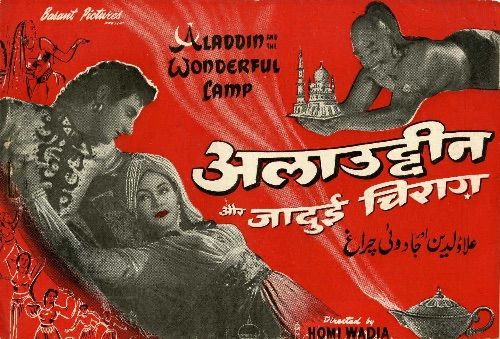 Among all the famous characters of the Arabian Nights tales, it is surely Aladdin with his wonderful lamp, who has been the biggest favourite with old and young alike. The reasons for this are not far to seek. Aladdin, endowed with magic powers of supreme power and an all-powerful genie' at his command, is everyone's dream and happiness .... an image, which in more recent times has been successfully donned by that intrepid and indefatigable hero James Bond, who needs no magic lamp, for he is a mini-genie by himself.

The presentation possibilities of the Aladdin tale has led to its taking many literary and artistic forms. And the cinema medium has found in it an ever-ready scope for wish-fulfilling fantasy and exciting trick shots. That is why the story has been tried in the films of many different countries and the Indian Cinema, with its old weakness for dream-peddling in all types of films, has already done it to death in more than a dozen versions.

The very first attempt was way back in 1927, in the silent days, when the Imperial Film Company made Aladdin and His Wonderful Lamp (1927), directed by veteran B. P. Misra and starring Zebunissa (who still appears in bit roles), Elizer and Yusuf. The film boasted spectacular sets, weird scenes and characters and amazing tricks. It is said to have been a big success in the last years of silent films, when it was frequently revived. And it naturally led to many other versions being tried, when the talkie medium made the subject all the more exciting.

There were two films in 1933 drawn from the same sources One thousand And One Nights and Alif Laila (1933) ….one made by Bengal's Madan Theatres and the other by Bombay's Royal Cinetone which specialised in stunt films. A similar company, called Indian Liberty, of old timer Nanubhai Vakil, remade it in 1938 with famed stunt hero Navinchandra playing Aladdin. Today's character actor Jayant also had a chance to do the same in a film made in 1941. But the version which should take the cake for casting is the successful one made by Wadia Brothers in 1952.

For in this film, today's great tragedienne, Meena Kumari, then in her teens and awaiting the big break, played the princess to Mahipal's Aladdin. Nimmi also did it for a fantasy Alif Laila (1953) made by K. Amarnath. There were Bengali, Tamil and Telugu films also made on the subject, one of which was dubbed in Hindi, starring A. Nageshwar Rao. Aladdin's fame also gave rise to his imaginary heirs, with films made about Aladdin Ka Beta (1957), Aladdin Ki Beti and even Aladdin The Second. Another subject with which many filmmakers have been toying is Aaj Ka Aladdin, a modern-day dream fantasy, that holds some exciting possibilities, not only for a topical interpretation of the tale, but also for social and political satire of a high order.

This article was originally published in Star & Style's 25 June 1971 issue. The images are taken from Cinemaazi archive and the original article
471 views