05 May, 2021 | Archival Reproductions by Cinemaazi 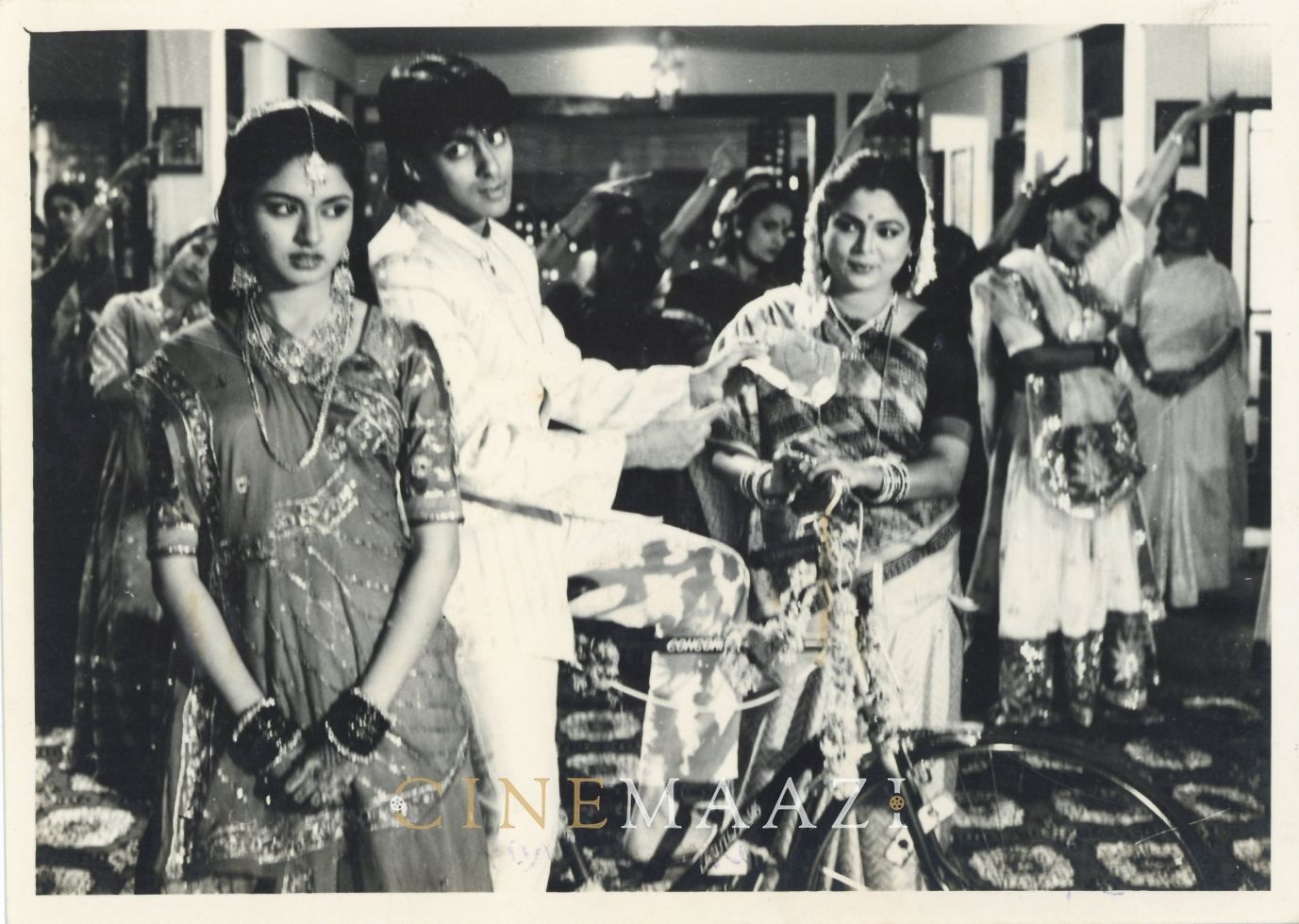 Hindi cinema is one industrial activity which defies all business norms. If a graph of its grosses were to be made on a chart, it would show violent ups and downs, rise and fall, in the same period, almost like a children's seesaw.

If we take the example of the previous year 1990 we can see the up to date position of its output and turnover. And it's not a rosy picture by any means, like the many dreams shown in films. About 80% of the Hindi releases just recovered the costs or went into deficit. The rest were profitable but on a varying scale.

Dil and Ghayal are big hits, not counting the biggest of them all  Maine Pyar Kiya  which  was released  in  1989.   A big gap lies between them and the  next  bunch of partly successful films like Kishan Kanhaiya; Police Public, Ghar Ho To Aisa and Baap Numbri Beta Dus Numbri. Films which just keep the buyers happy are Swarg, Naaka Bandi, Amir Garibi, Krodh, Souten Ki Beti, Muqaddar Ke Badshah, Hum Se Na Takrana; and on a small level Pati Patni Aur Tawaif. At the fag end of the year Prathibandh showed sure signs of success.

Bombay filmdom's business is so peculiar that the rules of demand and supply have to be altered to those who dictate and those who get dictated at a particular moment of time. The strange bedfellows include producers, distributors, theatre owners and stars.


Without the slightest doubt, last year's two big hits and other fairly cashy films that too coming in the bad monsoon period, changed the entire complexion of Bombay's industry. There was a new buoyancy and confidence for buying films, midway through an otherwise gloomy year. From a buyer's market, it has changed over to a seller's market. Some time ago, producers were running after distributors, begging them to see trial shows, offering attractive terms and guarantees. Now the buyers run after the film-makers to book film which smells money. Similarly the deserted theatres have suddenly upped their rentals and terms with distributors.

The most in demand are of course coming films of Aamir Khan, Madhuri Dixit, Sunny, Meenakshi, Anil Kapoor, Govinda and to a lesser extent of Naseeruddin, Kadar Khan, Shakti Kapoor, Mithun and villains-comedians like Anupam Kher, Amrish Puri, Sayeed Jaffery. The duckling turned biggest draw is Salman Khan, who claims his film Maine Pyar Kiya as the biggest hit in 75 years, something which even Amitabh could not achieve. The winning horses among directors are Rajkumar Santoshi, Indra Kumar (brother of Aruna Irani), Rakesh Roshan, Kalpataru, Esmaeel Shroff, Aziz Sejwal and David Dhawan.

The film market is becoming more and more like the share bazaar and there are amazing changes week by week if not daily. Aamir Khan's stock was absolutely down till Awwal Number. Within two days of Dil being declared a hit, there were huge offers for his other films from anxious buyers. His producers including his uncle Nasir Husain minted money on the deals and his own fee also become doubled. His delayed films, even those with flop actress Farha, got quickly readied for being put in the market.
The hottest star-combination is of Aamir-Madhuri and Anil-Madhuri. But strangely, Madhuri's films with other heroes or with her in a central role don't hold water. Filmdom also does not realise that it is too soon to declare them as long-lasting pairs. Deewana Mujh Sa Nahin was nowhere near Dil. And Anil-Madhuri together give big flops too, like Aamir and Juhi Chawla. Sunny hit off only in particular roles with a macho edge. Meenakshi has never had a stable star rating. Salman Khan is still a one-race horse and most of his coming films are with doubtful new heroines. Poor Kamal Hassan is still not valued by Bollywood despite the excellent collections of Appu Raja.

Wise men of the industry also look back on the twelve months and ask why nearly 100 out of the 120 Hindi releases showed average or poor results. In fact, 80 of them were total flops compared to their budget, plus print and publicity costs. The twenty in the first success bracket also included dubbed films of the soft-porn type like Garam Jawani, Qatil Jawani, Gulabi Raaten etc. And the eighty in the flop group also had big stars, rich production values, spectacular songs-dances and the rest. Now, what conclusions can one draw?

What the audience wants is a well-made, somewhat unusual film, based on well-written script with new situations, even though the overall formulas remain the same. All the rest are supplementing factors and not the main thing. Popular stars have gone down if the story content and treatment are poor. Same way, very catchy songs in a bad or eccentric film have brought no results, except for the big sale of audio cassettes.

Much is being made of music in the present trends and some industry people go to the extent of saying that one extra-ordinary song can catapult a film to the block-buster level. But this is narrow fallacy. Oye Oye and Ek Do Teen Char alone were not responsible for Tridev (1989) and Tezaab (1988). There was a lot more in the two films for people to go and see them again and again. At the most, the songs served as the basic magnetic pull. The same will happen with Hum and Chumma Chumma, when Amitabh's most promising film is released. The bunch of catchy songs in Dil and Maine Pyar Kiya are no doubt a big and pleasing attraction, which would add some repeat value too. But it works because the films are basically good and gripping. That way, Ghayal and Police Public have clicked with hardly two are three hummable songs. At the same time, totally music-oriented films like Awaz De Kahan Hai have miserably failed and the types of Tum Mere Ho have just come and gone, while the music cassette industry is booming with Anand-Milind, Bappi Lahari, Ramlaxman, and Laxmikant-Pyarelalat the top.

The present situation of success has thrown up an extremely interesting conflict, on which wagers are being laid for the future. Will it be the triumph of romance or action. This polarising has occurred as Dil is all romantic and Ghayal is all action, (While Maine Pyar Kiya had both). It's a welcome sign that Dil has also used a lot of linked comedy, which was almost vanishing from the Hindi screen. Ghayal has a good dash of sentiments and filial relations. Till the time of writing, Dil had an edge over its rival, and so romance may figure more prominently in 1991.

And so, onwards march to the future. Or rather, will it be future with a past? The graph will keep fluctuating. Today's hits and big names might turn to tomorrow's flops. And new names or those pushed back might soar to big heights. Waiting in the wings for coming months are Amitabh Bachchan, Anil Kapoor, Vinod Khanna, trying to reprove their worth as super-star  material. Lying somewhere mid-way are Mithun, Govinda, Rishi Kapoor, Sanjay Dutt, even Dharmendra, Jeetendra, Shatrughan Sinha and Raj Babbar. Among heroines, a dozen new charmers will compete with Sridevi, Dimple, Rekha, Jaya Prada, Amrita, Neelam, Juhi, Shilpa, Sangeeta and all. Stars are still all important for the films as distribution deals and finance scouring are done on their names.

But the ultimate future of the industry, the directors, the stars, the composers and the fight directors etc., will depend on the quality of films they make for themselves.

This article was originally published in Indian cinema 1990. The image sused are from the original article and Cinemaazi archive