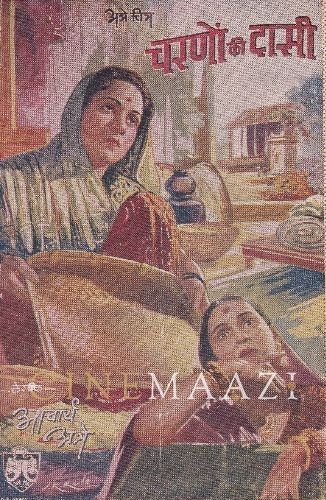 Here is some old-wine-in-new bottle stuff which becomes a delightful entertainment. Right from its first foot to the last bit of celluloid, Charno Ki Dasi (1941) remains a fast picture unfolding an age-old theme and yet because it is shaken and cocktailed well, it presents an entirely new flavour which holds audience interest right upto the last second.

It is easily the best photoplay so far written by the author who has woven into an old carpet a new design with masterly and colourful threads of vivid sequences studded with brilliant dialogues and almost perfect portrayals.

For sheer harmony of thought and action, this picture becomes a model to be copied by many a writer and particularly by those Maharashtrian pen-wielders who brag about their work without turning out anything substantial.

It is an old old story so familiar to millions in India with the joint family system of life. A shrewish and tyrannical mother-in-law, a dutiful and loving daughter-in-law, a tame and submissive son and a puzzled and henpecked husband-among them they create the age-old drama of tyranny, family quarrels, protests and rebellions and punctuating it with some incidental humour give us an entertainment which becomes at once delightful and instructive.

Durga Khote acts the mother-in-law and in doing so lives her part. Vanmala portrays the charming daughter-in-law and sparkles with a new personality. Avinash improves himself beyond recognition as the submissive son and goes one better than his previous performance in Ghar Jawai.  Even  Kusum Deshpande is whirled to the top by others, as the spoilt daughter of the house.

The rural atmosphere in the picture is picturesque and convincing. The photography is pleasant and the sound is perfectly audible. The songs and their choice words (Marathi) linger in the memory with a pleasant flavour. The dialogues are crisp, bold and appropriate. The direction Is superb and lifts Gajanan Jagirdar far above the average and very near to the top liners.

Yes, you must not miss Charno Ki Dasi. It is entertainment with a capital “E”.

This review was originally published in Film India. The image is taken from Cinemaazi archive and wasn't part of the original article.